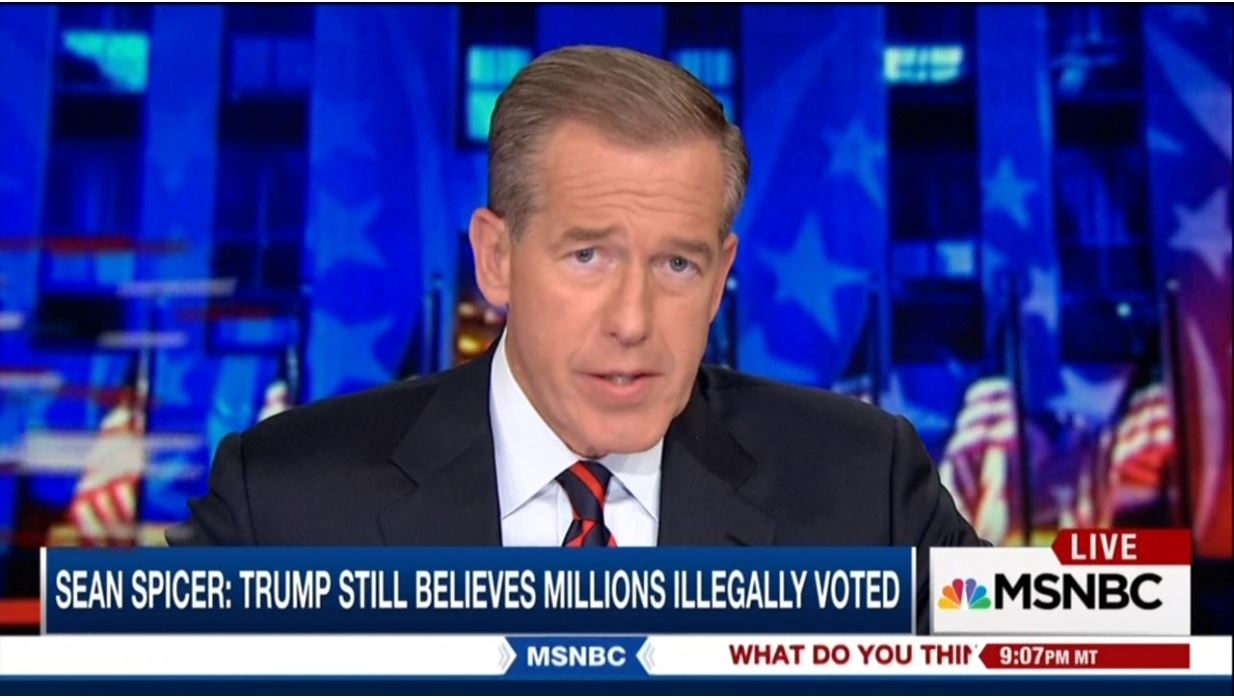 During MSNBC The 11th Hour late Monday night, the outlet’s resident fibber Brian Williams attacked President Donald Trump and the White House for creating an “alternative universe.” “Is it as striking to you in the briefing room as it is to television viewers that an alternative universe is being proposed, alternative definition are being trotted out in real-time,” he whined to senior White House correspondent Chris Jansing.

Scolding someone for creating an “alternative universe” is really rich coming from the man who lied, and lost his job as Nightly News anchor, for making up a story about being shot down in Iraq. That’s not to mention how he completely fabricated a tale about seeing bodies floating through the streets of New Orleans following Hurricane Katrina.

Despite decrying the White House for spreading falsehoods, Williams’ panel did some universe creating of their own. “And then today, seemingly out of nowhere we hear, actually, President Trump doesn't think President Obama did it personally,” Jansing sneered in response to Williams’ original question. But her answer made it seem as though Spicer was walking back Trump’s claim Obama ordered a wiretapping. In reality, Spicer gestured with his hands and mocked the idea of Obama physically tapping a wire himself.

Both Williams and his guest Eli Stokols, from Politico, questioned the President’s trustworthiness and seemed to inadvertently lift the veil on universes spun during the Obama administration. “And that something like Iran is found violating the nuclear deal and a president has to address the nation,” Williams noted as an event that would require the public to trust the President’s judgment. But according to the White House at the time, and backed up by the friendly press, that was supposed to be a virtual impossibility.

“And you saw the difficulty of defending and explaining nonsense. When you put out nonsense, you cannot defend it,” Stokols chided. But what about the “nonsense” spewed by Obama about keeping your insurance after the passage of ObamaCare? Or how about having a government official tell the public that the Benghazi attack was because of a video? Those facts make Stokols’ comment of “presidents need to have this credibility for that really important moment and when you just sort of whittle it away willy-nilly” ring hollow.

Let’s not forget that this is MSNBC we’re talking about here. It’s the so-called “news outlet” that tried to re-write the history of the passage of ObamaCare and falsely claimed that Republicans created the ‘your pushing grandma off a cliff’ line. MSNBC’s Chris Hayes once dedicated a sizable portion of All In to arguing that Trump “could literally” trigger a nuclear armageddon.

It’s quite hypocritical for MSNBC to whine about such things when they themselves seem to have perfected the art of creating alternative universes.

BRIAN WILLIAMS: Chris Jansing, a question that I mean to ask seriously: Is it as striking to you in the briefing room as it is to television viewers that an alternative universe is being proposed, alternative definition are being trotted out in real-time?

CHRIS JANSING: Well, it's frustrating because you think you asking a very logical, straight forward question and the answers get so circuitous. I think it’s important to point out, Brian, that for nine days, what we’ve heard from Sean Spicer and other senior aides to the President of the United States, repeatedly about his accusations, his unsubstantiated accusation that President Obama had wiretapped President Trump, was “the tweet speak for itself.”

And then today, seemingly out of nowhere we hear, actually, President Trump doesn't think President Obama did it personally. And he did seem to have a different answer in a way than Kellyanne Conway. Because she started pushing back against this broader idea of surveillance and he was saying, “No, that wiretapping was in quotation marks and it actually is about broader surveillance.” 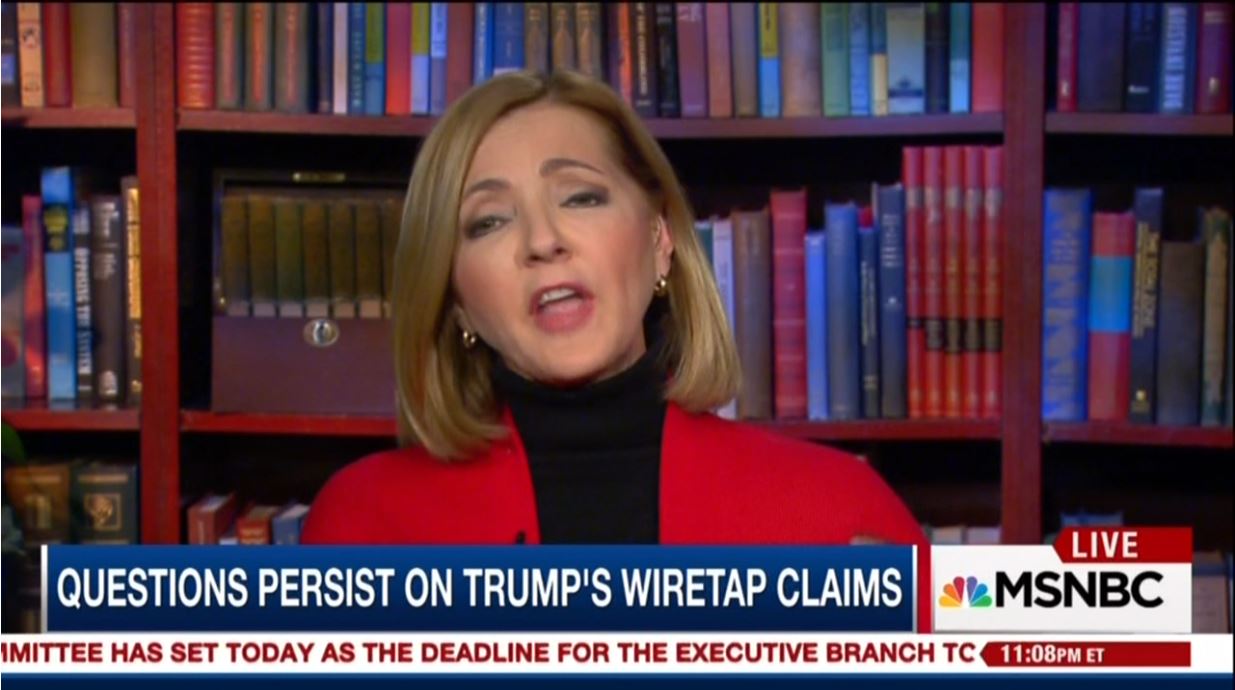 nd they always try to bring it back to these reports. The fact of the matter is there have been no reports. Any published reports in any legitimate newspaper or publication that has any proof that President Obama did this to President Trump. There has been no one in this administration who has that proof, no one on Capitol Hill who has this proof, no one in intelligence community who has this proof and yet now there is a request to extend the period by which they find this proof and send it to the intelligence committee.

WILLIAMS: Eli Stokols, you write tonight about the importance of trust. And at the presidential level, it is obviously essential. And when people talk about this, they use the example that makes us all sound like the parents that we are. And that something like Iran is found violating the nuclear deal and a president has to address nation. And in this case he is forced to use language to show he's really, really serious because of what came before it.

ELI STOKOLS: Yeah, presidents need to have this credibility for that really important moment and when you just sort of whittle it away willy-nilly right from the beginning of your presidency when you're lying about your crowd size and the size of your electoral college victory and pretty much everything, you're not going to have a lot of credibility left. You saw that clip in the briefing today, that I’m sure will be in an MSNBC promo by some point this week, Peter Alexander asked the most important question of this White House, which is how can anybody trust what is coming from the President?

And you saw the difficulty of defending and explaining nonsense. When you put out nonsense, you cannot defend it and I think sitting there and saying “Of course he's telling the truth except when he's joking,” to use air quotes basically to defend or parse a tweet to saying: “He wasn't talking about President Obama.” Even though in the subsequent tweet you showed he was saying he's a nasty, sick guy.