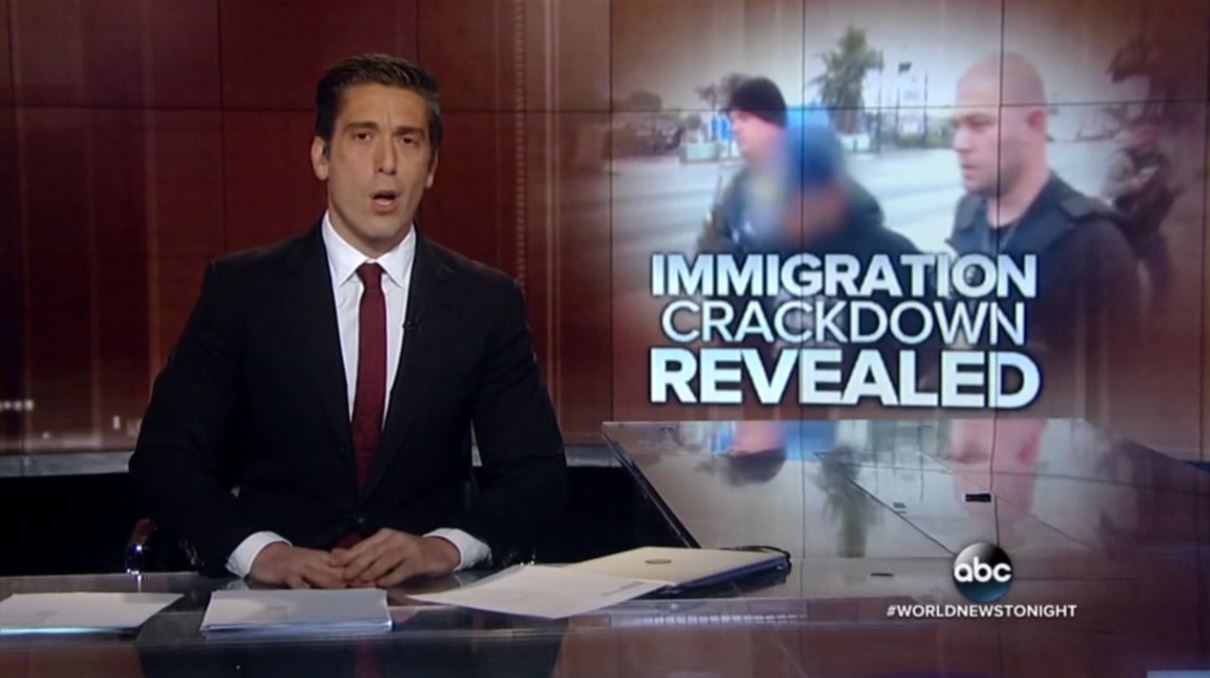 The ABC, CBS, and NBC evening newscasts seemed to be in a panic Tuesday after the White House signed off new directives to the Department of Homeland Security (DHS) instructing them to crackdown on illegal immigration. “Tonight, President Trump's immigration crackdown revealed,” anchor David Muir freaked during the tease of World News Tonight, “The new and sweeping plan to deport undocumented immigrants across this country. Who will be targeted?”

Throughout their total of eight minutes and 35 seconds of coverage, not once did the networks report on the criticism conservatives had with the orders’ perpetuation of the Deferred Action for Childhood Arrivals (DACA). Instead, they focused solely on criticisms from the left and were supportive of DACA’s survival.

“The Trump administration today signing off on new immigration rules that could put the majority of the country's 11 million undocumented immigrants at risk of deportation,” warned ABC’s, Cecilia Vega. She also chastised the President for going farther than his campaign promises of targeting only the worst, “But the new orders, issued today by the department of homeland security, go far beyond that.”

While she hammered Trump for being less forgiving that former President Barack Obama, she also touted Trump’s call on DACA. “But the new rules do not affect the more than 750,000 people who came to the country illegally as children, known as dreamers,” she reported. But soon after she did an 180-degree spin and claimed that “today that the matter of dreamers in this country is not yet settled.”

On CBS Evening News, reporter Jeff Pegues seemed to take issue with DHS being tapped to build the border wall. “The Department of Homeland Security is also tasked with building President Trump's southern border wall, estimated to cost $21 billion,” he noted, “But a report by DHS' internal watchdog questions whether the department is up to the task.” He recalled that DHS had once inefficiently spent $1 billion to strengthen parts of the current border fence before calling off the project.

According to a critic of the agency who sat down with Pegues, “DHS was put together after 9/11 with good intentions, but it brought together a lot of disparate agencies that had never worked together.”

Anchor Lester Holt seemed to tout protesters who were angry over Trump’s immigration positions and executive orders during NBC Nightly News. “As the President's immigration policies continue to meet with resistance, activists unfurled a large banner reading “refugees welcome” at the base of the Statue of Liberty,” he said. The same place where he recently lectured viewers on the meaning of the monument.

NBC’s justice correspondent Pete Williams appeared to fret over the expansiveness of the order:

To handle the extra work, the memos call for hiring 5,000 more border patrol agents and 10,000 more ICE Agents who enforce the law nationwide. No more catch and release. People detained at the border will be held until their court hearings. No longer released and allowed to show up later. Immediate deportation without any hearing for people picked up who have been here illegally less than two years. It used to be two weeks. And prosecution or removal for adults here who pay human smugglers who pay to have their children brought here.

Williams even leaned on an “immigration rights” advocate to spread fear of the order. “Anybody who is undocumented whether they’re going to the grocery store or whether they’re dropping off their kids to school, at any given day they could be deported,” he exclaimed.

The blacking out of criticisms of Trump’s order by anyone other than liberals demonstrates that the liberal media’s concern is aligned uniformly with left as a whole. And it shows that they view criticism of the rules not going far enough as unimportant.

DAVID MUIR: Tonight, President Trump's immigration crackdown revealed. The new and sweeping plan to deport undocumented immigrants across this country. Who will be targeted?

MUIR: Good evening, and it's great to have you with us here on a Tuesday night, and we begin tonight with those sweeping new guidelines putting millions of undocumented immigrants in America on notice. Tonight here, the new rules, and new directives for border agents and local police. The new guidelines released today just as President Trump was visiting the new National Museum of African-American History. It was there he address the growing number of anti-Semitic threats and hatred in this country. And those troubling images tonight from a St. Louis suburb. The headstones knocked over in a Jewish cemetery. Amid dozens of threats being investigated now by the FBI. We have it all cover, and begin with the immigration crackdown. ABC's Cecilia Vega leading us off from the White House.

CECILIA VEGA: The Trump administration today signing off on new immigration rules that could put the majority of the country's 11 million undocumented immigrants at risk of deportation. An overhaul of the immigration system, a promise at the heart of Donald Trump's campaign from the very beginning. 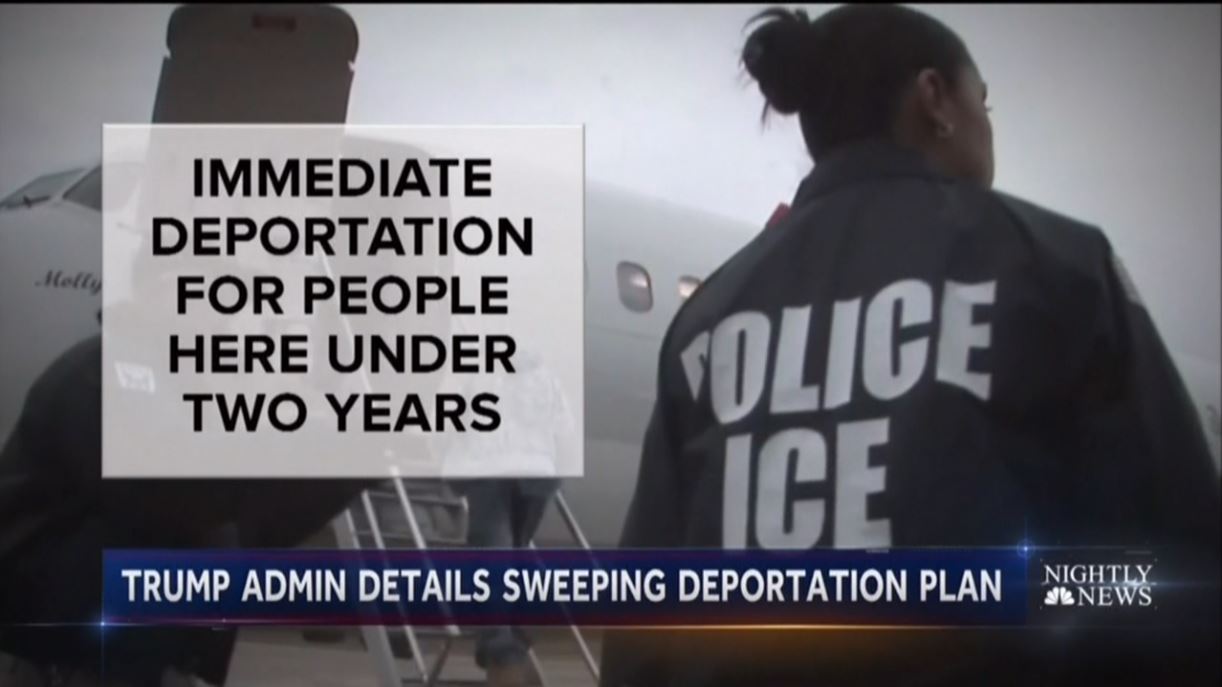 VEGA: His pledge, to target the worst of the worst.

TRUMP: We have some bad hombres here and we're going to get them out.

VEGA: But the new orders, issued today by the department of homeland security, go far beyond that.

But the new rules do not affect the more than 750,000 people who came to the country illegally as children, known as dreamers. The president telling David they shouldn't be worried.

MUIR: So Mr. President, will they be allowed to stay?

TRUMP: I'm gonna tell you over the next four weeks.

MUIR: And Cecilia Vega with us live from the White House. And Cecilia, we asked the president about the dreamers. Is what we heard today definitive? Do they get to stay?

VEGA: Well David, Sean Spicer said today that the matter of dreamers in this country is not yet settled. This is also part of the plan though. They plan to hire 15,000 new immigration officers and border patrol agents, and call on local police to help with deportations, but David, how all of this gets paid for remains to be seen.

LESTER HOLT: The Trump administration also unveiled its details for the sweeping plan to potentially deport millions of undocumented immigrants. As the President's immigration policies continue to meet with resistance, activists unfurled a large banner reading “refugees welcome” at the base of the Statue of Liberty. An incident now under investigation. For more on the president's deportation plan we turn to our justice correspondent, Pete Williams.

PETE WILLIAMS: The secretary of homeland security calls for vastly more aggressive enforcement of immigration laws already on the books to reduce the number of people here illegally and fulfill a central Donald Trump campaign pledge.

WILLIAMS: As of today, nearly anyone here illegally is subject to deportations. Fewer exemptions. Any time undocumented migrants are picked up by police for any violation and their fingerprints are sent to homeland security, they could be deported. In theory for traffic violations though Homeland officials say they’ll concentrate on serious offenses.