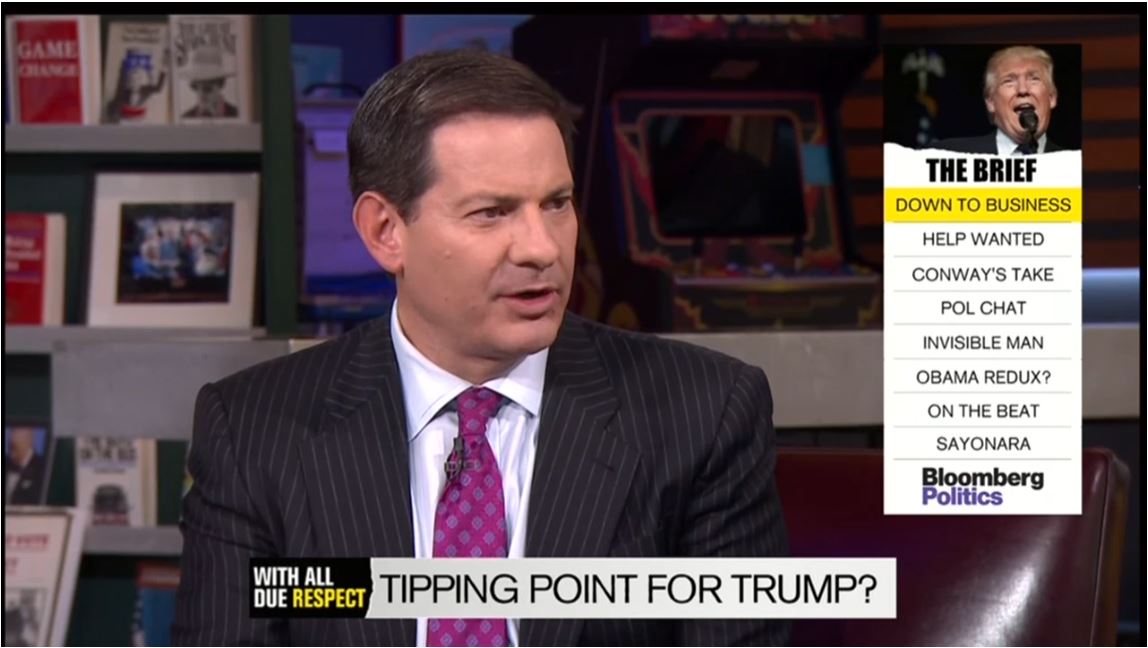 Bloomberg’s political duo, Mark Halperin and John Heilemann, seemed to take conspiracy theories about a Donald Trump presidency to a new level Monday evening’s With All Due Respect, when they speculated that the president-elect would “openly” and “with impunity” profiteer off of his elected position. And in the process, they implicated both President Lyndon B. Johnson, Senator Harry Reid in such money grabbing schemes.

“I think he wants to get rich off being president, and will do everything he can as long as a lawyer tells them it's ok,” declared Halperin before predicting that one of the events that would stop Trump would be an indictment. The other two events, according to Halperin, would be one of his adult children warning him he’s hurting the brand, or a White House lawyer telling him he needed to liquidate his company.

“I think that is pretty outrageous, if true,” responded Heilemann, “I don't disagree that all the signs are horrible.” He proceeded to explain that the only real way for Trump to avoid perceived conflicts of interest would be to sell off all of his company’s assets and put it in a blind trust where his kids could not manage it.

A skeptical Halperin sarcastically asked, “You know when Donald Trump do that? You know when he’ll do that?” “I know, when monkeys fly out of a place I can’t talk about on television. But it is the only solution,” Heilemann joked.

Heilemann had a warning for the president-elect, “If he is going to be a profiteering president, if that’s what he’s going to do openly, and thinking he can do it with impunity, he is going to be mired in scandals throughout the entirety of his administration.”

“I bet he’s thinking of Lyndon Johnson and Harry Reid, two guys who got much wealthier while they were in public office,” guessed Halperin, trying to get into Trump’s mind, “And he’s like, ‘Everybody does this. What's the big deal?’” But by using both public figures for Trump’s reasoning he’s implying, if not admitting, that profiteering is how they became so wealthy.

“Well clearly, both of those analogies are variously true,” Heilemann admitted as he tried to qualify Trump as special case, “But none of them were multibillionaire occupants of the oval office who then used the presidency in a blatant way to try to profiteer.”

The conversation was triggered by recent meetings Trump had had with business partners since the election. In his opening monologue, Heilemann noted that foreign diplomats recently attended a sales pitch at Trump’s new Washington, DC hotel. It would have been nice if the media was this concerned, during the election, by the foreign diplomats and heads of state giving huge donations to the Clinton Foundation in exchange for meetings.

JOHN HEILEMANN: There continues to be a lot of interest in potential conflicts of interest when it comes to Donald Trump's sprawling business empire. So far the president-elect has done next to nothing to assuage those concerns, and in some respects is only exacerbated them. Democrats are howling over a Argentina newspaper report that says that Trump used his congratulatory phone call with the Argentina president, Mauricio Macri, to ask for help with a staled construction project that will bear his branding in Buenos Aries. The spokesman for Macri denies that that ever happened, but it’s hardly the first accusation that Trump might use his new power to boost the family's bottom line.

Last week, between administration job interviews, Trump met with three Indian commercial partners who are building a luxury Trump office building south of Mumbai and, according to reports seem eager to capitalize on their newly valuable connection to the president of the United States in waiting.

The Washington Post reported that a hundred foreign diplomats attended a sales pitch about the Trump International Hotel in Washington last week, and some of them consider the opportunity to spending bigly at the hotel an easy way to flatter the incoming POTUS. Separately, a Washington Post analysis of Trump’s business dealings found at least 111 Trump related companies have done or are doing business in 18 countries across South America, Asia, and the Middle East.

None of what Trump has done to this point appears to be illegal, but it certainly raises suspicions that he could if you wanted to profit financially from his occupancy in the highest office in the land. If only someone had told the president-elect that he might want to be more careful about the appearance of conflict of interest.

HEILEMANN: So, given Trump’s history he’s unlikely to be as scrupulous as Obama is encouraging to be. But Mark my question to you is, what do you think the tipping point is for Trump, maybe, possibly, to start taking these concerns and criticisms seriously?

MARK HALPERIN: This is also unnecessary and so bad. It is not the right way to start. I think, it’s going to take a lot for him to change his ways. I think he wants to get rich off being president, and will do everything he can as long as a lawyer tells them it's ok. I think the three possible tipping points -- one would be if somebody gets indicted.

HEILEMANN: You have to wait that long? 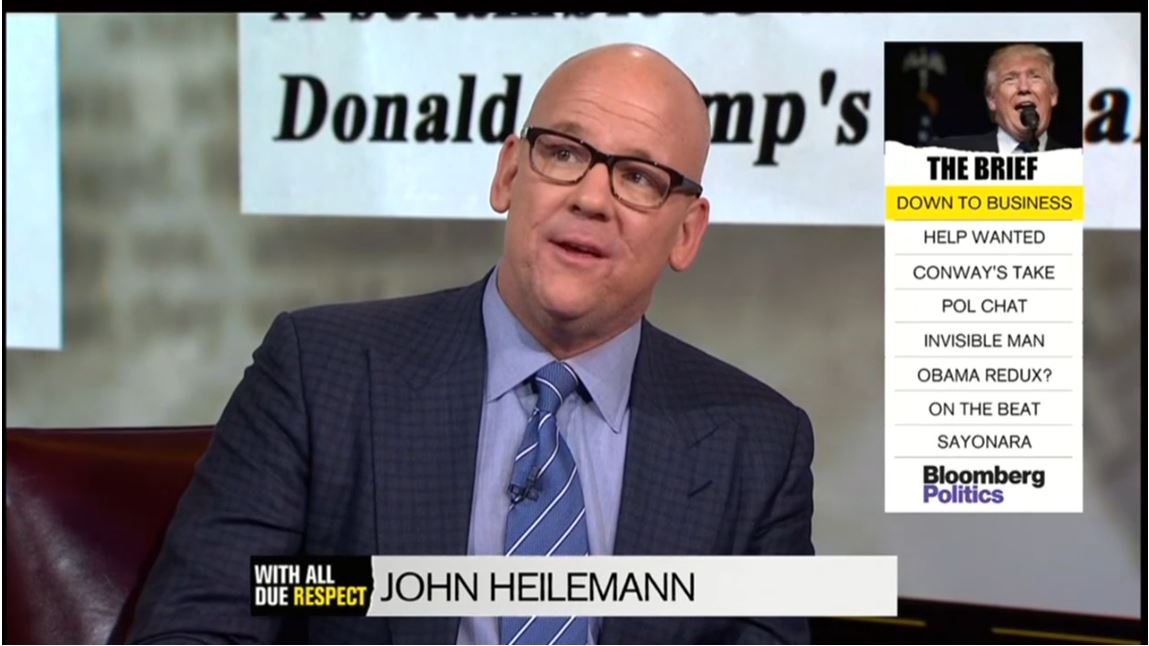 HALPERIN: Two would be if a member of his family says, “This is hurting our brand.” But I think the most likely way, and the best way, he hires a White House counsel, who tells him, a la the Trump University settlement, “This stuff is just going to be a distraction, an irritant, maybe worse. We got to put a stop to it and do what The Wall Street Journal editorial board said, or something like it. Reorganize the company to make it as blind and as cut off from government as possible.”

HALPERIN: I don't think it is why he ran, but it’s clearly—

HEILEMANN: That’s what he intends to do now.

HALPERIN: I think he thinks he can, without being punished, or I think--

HEILEMANN: With impunity, he thinks he can get away with this?

HEILEMANN: I think that is pretty outrageous, if true. I don't disagree that all the signs are horrible. And if the guy does not want to be mashed in scandals and constant accusations, of this kind, (that this is what he’s doing) he must do then what seems like the only thing that is proper, which is what The Wall Street Journal editorial board page, which you cited a second ago,-- we haven’t go into a lot of detail about that. But it basically said, “You got to liquidate the company, you got to do an IPO, you got to melt it down, and then put it into a blind trust. And keep your kids out of the position of being involved with managing that money and then being involved with the federal government.” Now, I know--

HEILEMANN: I know, when monkeys fly out of a place I can’t talk about on television. But it is the only solution.

HALPERIN: I bet he’s thinking of Lyndon Johnson and Harry Reid, two guys who got much wealthier while they were in public office. And he’s like, “Everybody does this. What's the big deal?”

HEILEMANN: Well clearly, both of those analogies are variously true. They both got wealthier, so have a lot of people while in office. But none of them were multibillionaire occupants of the oval office who then used the presidency in a blatant way to try to profiteer.

HALPERIN: I’m worried about this.

HEILEMANN: You seen concerned. As you have the right to be.