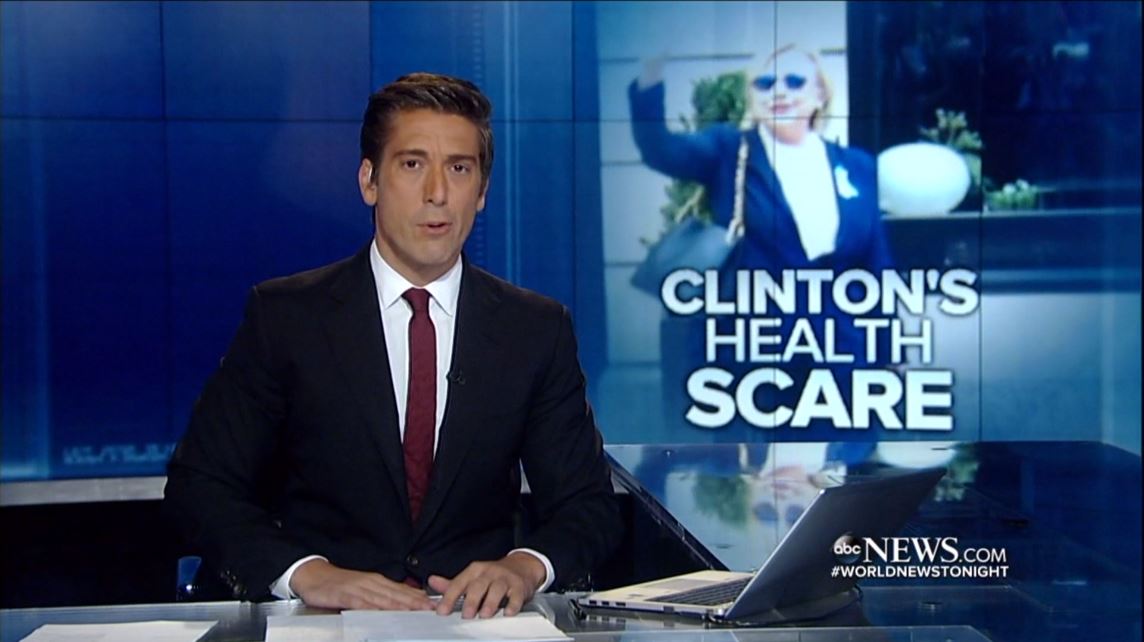 In an attempt to vigorously spin Hillary Clinton’s recent debacles, the “Big Three” network mobilized to her defense Monday. Between Clinton’s attacks on Donald Trump’s supporters and her medical episode on Sunday, the networks were busy trying to depict him as worse than her. “Meantime, as health becomes a major topic in this campaign, Donald Trump has released even less information about his medical history than Hillary Clinton has,” announced NBC anchor Lester Holt on NBC Nightly News.

“Trying to show he's transparent, Donald Trump's promising to share the results of a recent physical,” reported a skeptical sounding Hallie Jackson for NBC, “It's not clear what Trump will reveal or when.” Jackson had little to say about Clinton’s attack on Trump supporters Friday. She brushed off Trump’s comparison of the comment to Mitt Romney’s 47 percent controversy from 2012 , saying, “But for a confrontational candidate, possible political risk as a new poll shows 60 percent of Americans think Trump is biased against women and minorities.”

On ABC’s World News Tonight, reporters Cecilia Vega and Tom Llamas kept their repudiation of the situation simple. “To date, all he's released is this four-paragraph statement from his doctor, declaring that Trump, "Will be the healthiest individual ever elected to the presidency,"” Vega argued, “That doctor later saying he wrote it in a rush with Trump's car waiting outside.”

Llamas seemed irked that Trump would dare to want an apology from Clinton on behalf his supporters, or as Clinton calls them the “Deplorables.” “Trump, who has refused to apologize for his own controversial statements about women, Muslims and minorities, is now demanding a true apology from Clinton,” he stated.

The network which farthest out of their way to slam Trump with Clinton’s problems was CBS. On CBS Evening News, reporter Major Garrett tried to take the sting out of Clinton’s attack by running a series of controversial comments made by Trump. Their juxtaposition meant to show that Trump’s comments were worse hers. He also leaned on a clip of Republican Senator Lindsey Graham where he too exclaimed that Trump supporters were deplorable. “Trump also invited supporters white and black on stage to testify they’re neither racists nor deplorable,” said an unamused Garrett closing out his report.

CBS even trotted out John Dickerson, their Political Director, to expound on why Clinton’s debacles are meager compared to Trump’s. Dickerson harped on about how Trump has released less of his medical records than Clinton and how he had yet to release his tax returns. “And so the question with him is, if he is not transparent in the campaign, how transparent will he be as president,” Dickerson speculated. He concluded with insinuating, much like the other networks that Clinton’s comments were simply not on par with Trump’s disparaging comments in any way.

LESTER HOLT: Meantime, as health becomes a major topic in this campaign, Donald Trump has released even less information about his medical history than Hillary Clinton has. Now Trump says he'll too be releasing more information. At the same time Trump is firing back after Clinton called half his supporters a, quote, “basket of deplorables.” We get that end of the story from NBC's Hallie Jackson. 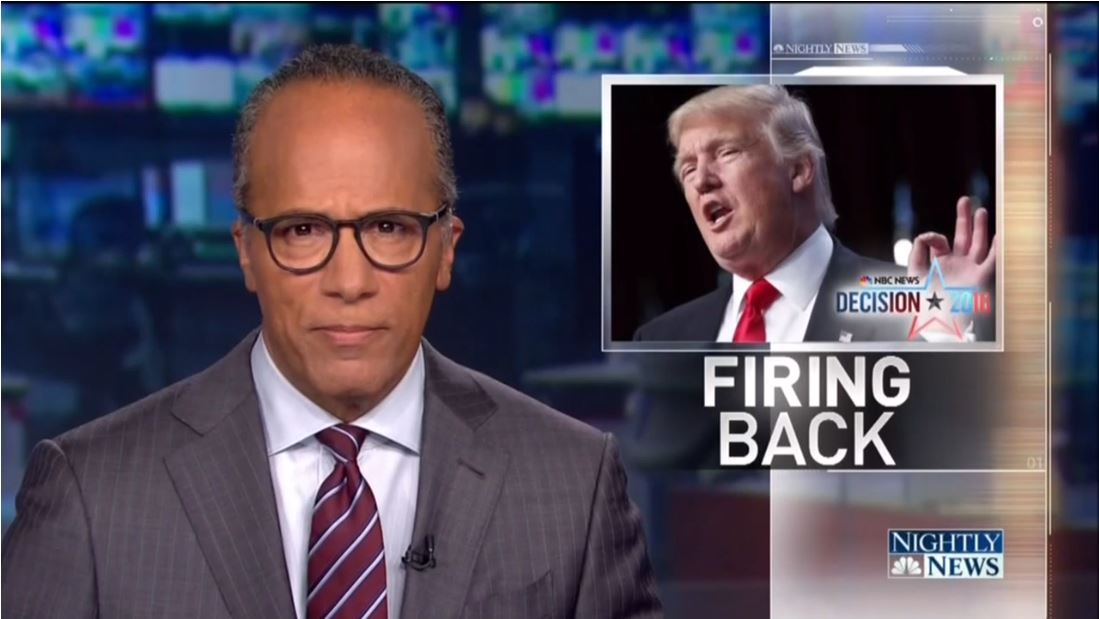 JACKSON: It's not clear what Trump will reveal or when. Though he's set to appear on the Dr. Oz show later this week, attempting to prove not just that he's healthy, but that he's not hiding anything. Still, he's released less information than Hillary Clinton has, whether it's on medical records or taxes. Trump today largely laying off questions about Clinton's health.

TRUMP: I just hope she gets well and gets back on the trail.

JACKSON: Trump instead excoriating her on something else, what Clinton said Friday night.

CLINTON: You can put half of Trump’s supporters into what I call the basket of deplorables. The racist, sexist, homophobic, xenophobic.

TRUMP: The disdain that Hillary Clinton expressed toward millions of decent Americans disqualifies her from public service.

JACKSON: Both sides eager for this fight, while Clinton's walking back the number of supporters she called deplorable, she's standing by the label itself. Trump's team calculating for her, this could be as damaging as Mitt Romney's 47 percent comment last cycle. His campaign out with a new ad, pouncing faster than they ever have before.

AD VOICE OVER: Viciously demonizing hard working people like you.

JACKSON: But for a confrontational candidate, possible political risk as a new poll shows 60 percent of Americans think Trump is biased against women and minorities.

STUART ROTHENBERG: It could remind many voters about his extreme supporters and about his intolerant comments over the past year.

JACKSON: Late tonight Clinton on Twitter hit Trump's running mate Mike Pence, who declined to call former KKK leader David Duke deplorable. But Pence did clearly denounce the support of Duke and anybody else who thinks like him.

SCOTT PELLEY: Donald Trump said he hoped that Clinton would be back on the campaign soon. In Baltimore today he fired back against her attack of his supporters. Here's Major Garrett.

HILLARY CLINTON: To just be grossly generalistic, you could put half of Trump's supporters into what I call the basket of deplorables. The racists, sexists, homophobic, xenophobic, islamophobic, you name it.

MAJOR GARRETT: Hillary Clinton named it all right, gross generalizations and all provoking the wrath of Donald Trump today in Baltimore.

DONALD TRUMP: She divides people into baskets as though they were objects, not human beings.

GARRETT: And adding a new layer of division to the already divisive Trump-Clinton debate. One Trump sought to exploit with this new TV ad.

AD VOICE OVER: You know what is deplorable? Hillary Clinton's viciously demonizing hard-working people like you.

TRUMP: You cannot run for president if you have such contempt in your heart for the American voter.

GARRETT: Trump, of course, has his own history on the subject.

TRUMP: When Mexico sends its people, they're not sending their best. They're bringing drugs, they're bringing crime, they're rapists. A total and complete shutdown of Muslims entering the United States. Look at my African-American, over here. Look at him.

GARRETT: When it comes to Trump and his base of support, South Carolina Republican Senator Lindsey graham said this in March.

LINDSEY GRAHAM: 35 percent of my party believes that Obama is a Muslim born in Kenya, he locked that crowd down. Now 65 percent of us just think he's a bad president.

GARRETT: Trump tonight accused Clinton of waging a hate-filled campaign lacking vision and without the prospect of change, Scott. Trump also invited supporters white and black on stage to testify they’re neither racists nor deplorable.

SCOTT PELLEY: Now with some insight into all of this let's bring in John Dickerson our CBS News Political Director, and of course the moderator of Face the Nation. John, this lack of information around Hillary Clinton's health, it goes to a broader issue of transparency. 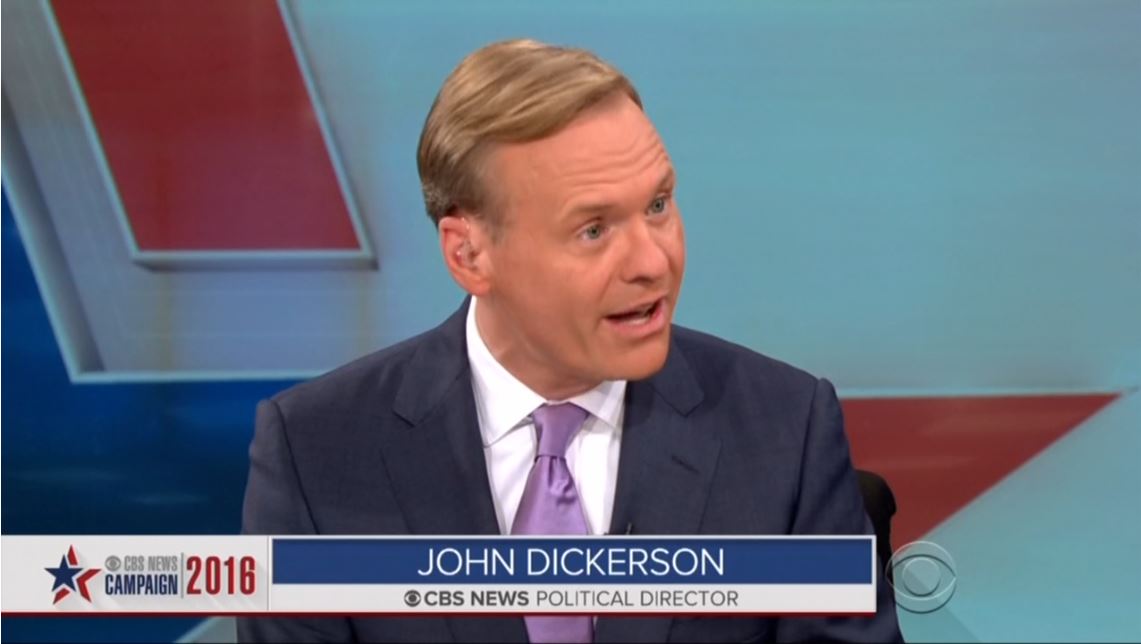 JOHN DICKERSON: That's right. These kinds of moments give you some sense of the habits of openness of a campaign. And that's important because it tells you how open they might be in a White House. Hillary Clinton already had a strike against her with the email server. Outside of the State Department system not transparent, then she deleted some email, not transparent either. But campaigns offer other ways in which transparency is tested. There are certain demands of the campaign. Do you turn over your tax returns? Do you turn over your medical records? Hillary Clinton has done that. She has done more on the medical records than Donald Trump and she’s turned over her tax returns. He has done nothing with tax returns and very little on health. And so the question with him is, if he is not transparent in the campaign, how transparent will he be as president?

PELLEY: Now, we just saw Major Garrett's story, what happens going forward with this deplorable comment of hers.

DICKERSON: It is a tug-of-war. Right now Hillary Clinton is on the defensive. Donald Trump would like that comment to mean all of his supporters suggest that she is disdainful of working people and it's an unappealing thing to be tagged with. Hillary Clinton would like that comment to really be about Donald Trump, and point out that he said derogatory things about women, that even Paul Ryan the Speaker of the House called him out for making racist comments. And that his ban— temporary ban on Muslims is Islamophobic. Depending who wins that tug-of-war that will determine whether those comments hurt or help Hillary Clinton.