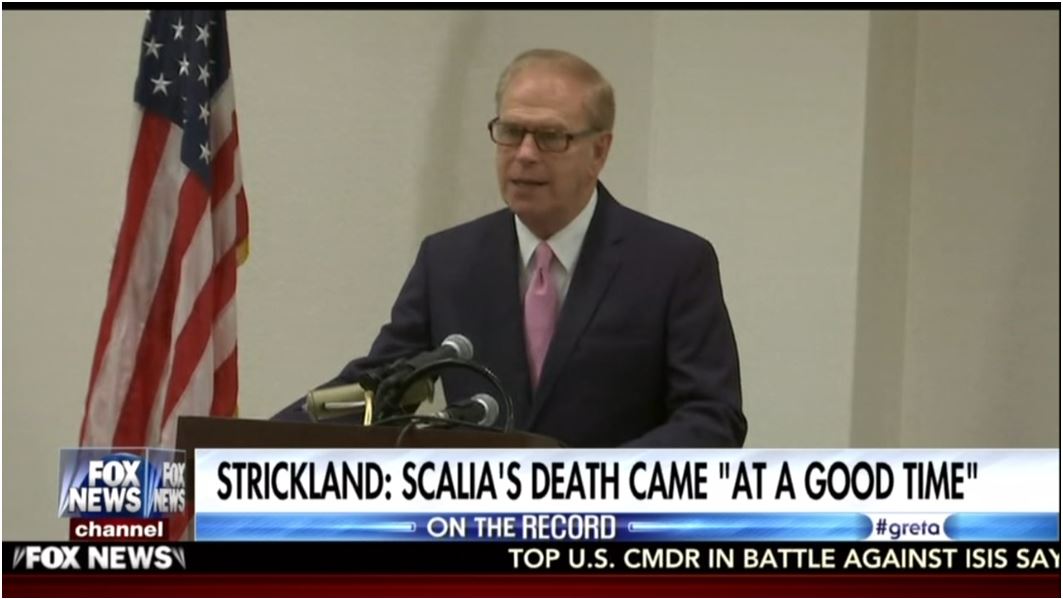 While the liberal “Big Three” networks were up in arms Wednesday evening over the a comment Republican presidential candidate Donald Trump made about “second amendment people” in reference to stopping Hillary Clinton, they were strangely silent then when a Democratic Senate candidate from Ohio was caught celebrated the death of Justice Antonin Scalia. “And my friends, a lot of average citizens out there don’t understand the importance of that court,” Ted Strickland declared during an AFL-CIO event, “I mean, the death of Scalia saved labor from a terrible decision.”

And Strickland didn’t stop there. “And I don’t wish anyone ill, but it happened at a good time because once that decision had been made, it would have been tough to reverse it,” he said to the crown as the union members laughed and cheered him on. Once the audio recording of his comments came to light he issued an apology saying, “That was an insensitive remark and I apologize.”

During their Wednesday evening broadcasts ABC, CBS, and NBC dedicated seven minutes, 51 seconds to Trump’s comment and absolutely zero on Strickland’s. The networks’ blackout of Strickland’s comments, and subsequent apology, puts their bias for Hillary Clinton on full display. They got bent out of shape for Trump’s ambiguous comment, but didn’t raise an eyebrow when a Democrat praised the death of a conservative icon.

In addition, Spanish-language networks Univision and Telemundo failed to report about Strickland’s comments as well. Both of them dedicated well over two minutes to Trump’s comment, but it’s not really a surprise since they are owned by parent companies of ABC and NBC respectively.