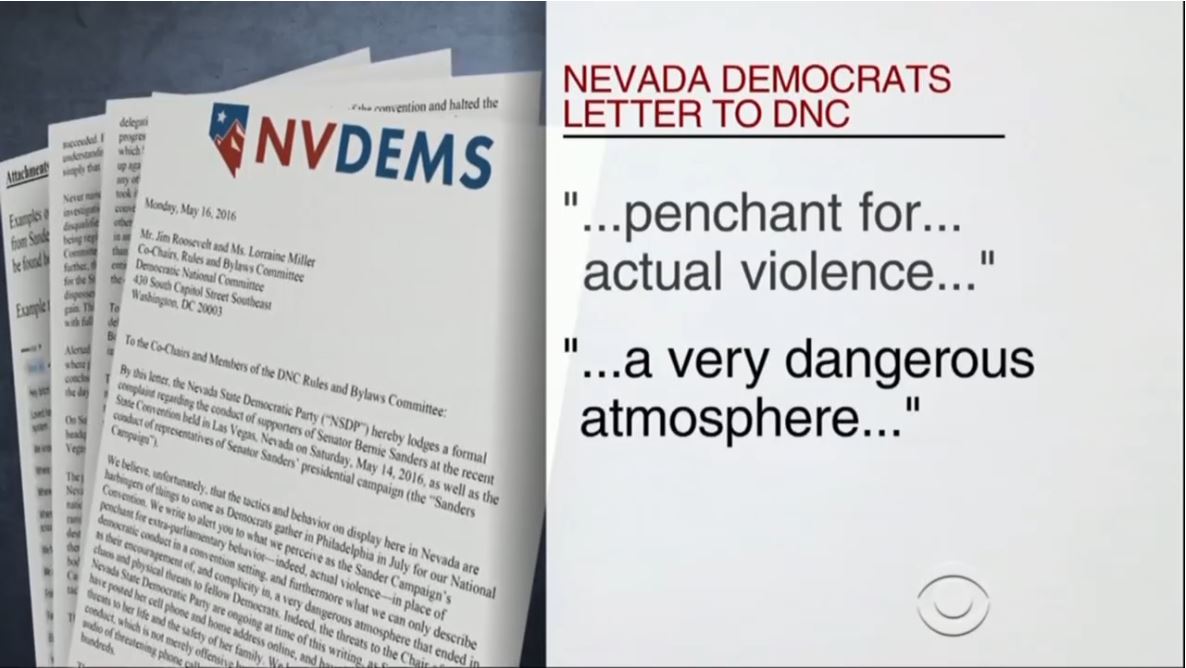 It took most of the networks three days to finally cover the controversial Nevada Democrat Convention, where Sanders supporters tried to stand up to the Clinton election machine. But instead of documenting the arguably shady actions of the state party officials, the networks chose to smear Hillary Clinton’s rival. “Penchant for actual violence,” read both CBS and NBC reporters from a Democrat Party document about Bernie Sanders supporters, on their evening broadcasts Tuesday.

On Saturday May 14, the Nevada Democratic Party held their convention where the last few delegates would be rewarded to Clinton and Sanders. Clinton did in fact have more representative at the convention, 1,695 to Sanders’ 1,662, according to the Party’s tally. But the Party had excluded 58 of Sanders’ representatives from taking part in the proceedings, which would have allowed Sanders to have a majority.

The Clinton supporters running the convention steam rolled opposition with a series of voice votes with no tallies, and disregarded their own parliamentary procedure in the process. All in an effort to net Clinton two more delegates.

Instead of focusing on that, NBC’s Andrea Mitchell and CBS’s Nancy Cordes fretted over how Sanders supporters would act during the Democratic National Convention.

After reading a statement from the Sanders campaign, about showing respect for their supporters, Mitchell pondered if it was a veiled threat for the convention, “Could that be a not so subtle warning about July's national convention?” Cordes also worried that other states could see the same thing, “Some Democrats are worried, Scott, that this kind of intra-party conflict could spread to other state conventions.”

It's true that two wrongs don't make a right, and there is so much wrong here.

SCOTT PELLEY: Now to the democratic presidential race that is all over but the primaries. There were two primaries today, and Nancy Cordes has the latest. Nancy.

NANCY CORDES: Scott, both campaigns believe that Kentucky could go either way tonight. Oregon, they expect, will go to Sanders. But top democratic officials were preoccupied today with another state, Nevada, after Sanders supporters disrupted the state's democratic convention over the weekend. Today, state party officials sent a blistering letter accusing the Sanders campaign of having a, quote, "Penchant for actual violence" and encouraging "A very dangerous atmosphere." Sanders shot back, "That is nonsense." Noting his campaign "Has held giant rallies with zero reports of violence." Some Democrats are worried, Scott, that this kind of intraparty conflict could spread to other state conventions.

LESTER HOLT: Let's turn now to the 2016 race. Hillary Clinton's lead in the general election slipping in our NBC news Survey Monkey poll to just three points over Donald Trump since last week. But there's much drama over Clinton's other opponent tonight. Bernie Sanders, after Nevada's democratic convention erupted in chaos over the weekend. As our Andrea Mitchell explains, his supporters are accused of violent outbursts, and now death threats. 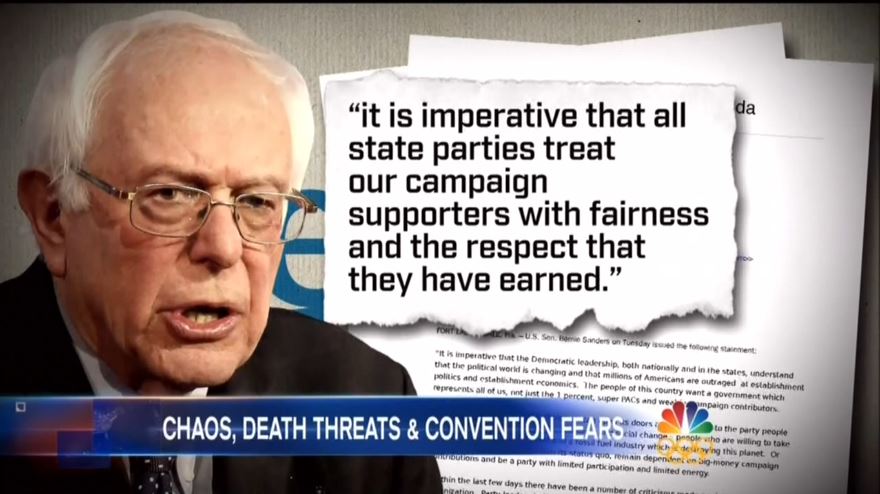 MITCHELL: The Sanders forces demanding a recount Saturday. The pro-Clinton chairwoman shutting them down, ending Sanders' hope of picking up more delegates after he lost to Clinton back in February.

HILLARY CLINTON: Is this a great night or what?

MITCHELL: Tonight the chairwoman releasing text and voice threats she said she's been getting from Sanders supporters.

VOICEMAIL: I think, people like you should be hung in a public execution to show this world that we won't that we won’t stand for this sort of corruption.

ROBERTA LANGE: I've got threats to my family, to my grandson, to my husband.

MITCHELL: When the state party accused the Sanders campaign of a, quote, “penchant for actual violence,” Sanders at first not responding. Then firing back in a statement, “that is nonsense. I condemn any and all forms of violence. Including the personal harassment of individuals. It's imperative that all state parties treat our campaign supporters with fairness and the respect they have earned.” Could that be a not so subtle warning about July's national convention?

JON RALSTON: The convention itself could be a problem to Hillary Clinton. But it's what happens afterwards if they don't have real unity that people buy into. That's the problem for her in the general election.

DONALD TRUMP: I view a person who is flat chested is very hard to be a 10.

MITCHELL: Trump retaliating against Bill Clinton, tweeting, “amazing that crooked Hillary can do a hit ad on me concerning women when her husband was the worst abuser of women in U.S. Political history.” The former president asked to respond.

BILL CLINTON: No. I won't. I think people are smart enough to figure this out without my help.

MITCHELL: But Hillary Clinton still has to worry about tonight. Hoping to stop Bernie Sanders' recent winning streak by at least defeating him in Kentucky, to avoid stumbling across the finish line as she has toward a likely nomination. Lester.