Joe and Mika All But Openly Campaign for Trump

Following Trump's stunning two digit trouncing in Wisconsin co-host Brzezinski whined Wednesday, “I think the establishment and the Stop Trump forces are shooting themselves in the foot because they're so blindly focused their hatred on Trump to the point where they can't see that what they're going to get is Cruz.”

“I think Stop Trump movement will take the opposite lesson from Wisconsin,” said panelist Willie Geist trying to discredit Ted Cruz’s victory. “And they got Ted Cruz! Who will lose to Hillary,” Brzezinski exclaimed. What could possably be the “opposite lesson” to take away from Wisconsin? Is it that there are large numbers of people who dislike Trump? According to Geist the real lesson is that it was only because of the effort of a small organized group, and he seemed to insinuate that Trump’s opposition is tricking themselves into thinking they can win.

Geist went on to talk about Wisconsin talk radio host Charlie Sykes and how he said, on Morning Joe, that he was voting for Cruz even though he was not on his short list of picks. Brzezinski was not happy about Sykes settling on Cruz, “Then you probably shouldn’t choose him,” She snapped. If what Brzezinski argues is true, then why would they pick Trump?

Later on in the show, Trump’s new surrogates praised the statement their candidate released after he had lost the primary:

Donald J. Trump withstood the onslaught of the establishment yet again. Lyin’ Ted Cruz had the Governor of Wisconsin, many conservative talk radio show hosts, and the entire party apparatus behind him. Not only was he propelled by the anti-Trump Super PAC’s spending countless millions of dollars on false advertising against Mr. Trump, but he was illegally coordinating with his own Super PAC’s (which is illegal) who totally control him. Ted Cruz is worse than a puppet—he is a Trojan horse, being used by the party bosses attempting to steal the nomination from Mr. Trump. We had total confidence that Mr. Trump will go on to win in New York, where he holds a substantial lead in all the polls, and beyond. Mr. Trump is the only candidate who can secure the delegates needed to win the Republican nomination and ultimately defeat Hillary Clinton, or whomever is the Democratic nominee, in order to Make America Great Again.

For a while now Scarborough has been begging Trump to show more discipline when speaking and answering questions. And with that statement, Scarborough says Trump hit his mark. “Then there's the statement last night, instead of a barrage of angry tweets at Fox News and all these other stuff, that's what he has to do. That statement was tough and you know what? It was on message.”

John Heilemann of Bloomberg Politics concurred with Scarborough. “Well, he also answered your question from yesterday which was “can Donald Trump hold himself back from the cameras?”” Heilemann continued, “He just put a statement and stayed off the camera last night. You know, some discipline just in that.”

It’s hard to claim someone is being disciplined and growing as a candidate when they’re accusing their opponent of breaking federal laws with no evidence at all. But then again Morning Joe has a habit of going out of their way to support their guy. They’ve ignored how hard obtaining delegates will be for him and declared him the nominee. They’ve argued that it’s too late to “start telling the truth now” about Trump, and if you speak out against him you better jump in the pool. And for a long time their love affair was a loosely kept secret.

The two Morning Joe hosts no longer need to hide it, because now they are openly campaigning for their buddy Donald J. Trump. 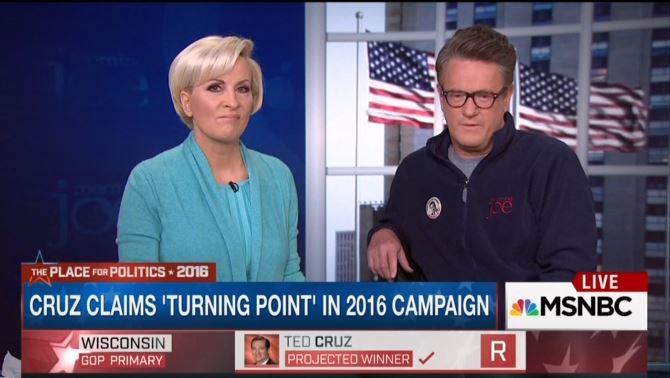 MIKA BRZEZINSKI: They also don't like him. I mean, I think the establishment and the Stop Trump forces are shooting themselves in the foot because they're so blindly focused their hatred on Trump to the point where they can't see that what they're going to get is Cruz. And he actually will not pivot, he actually will be Ted Cruz, someone who is resoundly hated in Washington and has done damage when he spent time there. And I think they're misreading Trump, who may not be the best candidate for the Republican party in their eyes, but I bet has the ability to pivot on issues ten times more than Ted Cruz, whether you like him or not.

WILLIE GEIST: I think Stop Trump movement will take the opposite lesson from Wisconsin.

BRZEZINSKI: And it will backfire.

GEIST: And say “look what we did.” Charlie Sykes led that charge and they stopped Donald Trump by a huge margin, by 13 points.

BRZEZINSKI: And they got Ted Cruz! Who will lose to Hillary!

GEIST: When we talked to Charlie Sykes on this show yesterday remember what he said when we asked him about Ted Cruz? He said “Ted Cruz isn't my first, second, third or fourth choice.”

BRZEZINSKI: Then you probably shouldn’t choose him.

BRZEZINSKI: He’s not! Hey, he's fine with me.

JOE SCARBOROUGH:  Listen. Let's be clear here, Ted Cruz will never be the nominee of the Republican Party.

BRZEZINSKI: Well if he is, good for me.

SCARBOROUGH: No, no, no, no. You don't have to even say that. Ted Cruz will never be the nominee.

SCARBOROUGH: You know, we've been talking, Mika, about the importance of Donald Trump showing more discipline.

SCARBOROUGH: It's a slow roll. [ Laughter ] But you had the AIPAC speech which was a great step forward in that direction. You had, this week, Donald Trump putting out a policy paper on the wall, the Mexican wall which, again, let people pick that apart but there's policy now attached to it that he can explain away and people can argue against the policy.

Then there's the statement last night, instead of a barrage of angry tweets at Fox News and all these other stuff, that's what he has to do. That statement was tough and you know what? It was on message. Would I have put "Lying Ted Cruz” in there? No. But I would haven't done a thousand things Donald Trump has done, he knows his audience and that statement was on message last night and it's exactly what he had to do.

JOHN HEILEMANN: Well, he also answered your question from yesterday which was “can Donald Trump hold himself back from the cameras?” Can he resist the camera, the lure of the camera? Just -- forgetting about what's in the statement, the fact that it was a statement and that he didn't do a press conference, didn't do a speech, didn’t create any opportunity for him to go off on a tangent or say something that would get him in trouble. He just put a statement and stayed off the camera last night. You know, some discipline just in that.

GEIST: He did cruise Ted Cruz of breaking the law without providing any evidence. With coordinating with his Super PAC.

HEILEMANN: Well, you said it was a slow roll.

GEIST: I think if you're going accuse someone of breaking the law you should present a case.