That’s it, the GOP primary is over and all the other campaigns can go home because Donald Trump is the GOP nominee, or so Morning Joe would have you believe. “And let me say that at 10 after the hour right here, 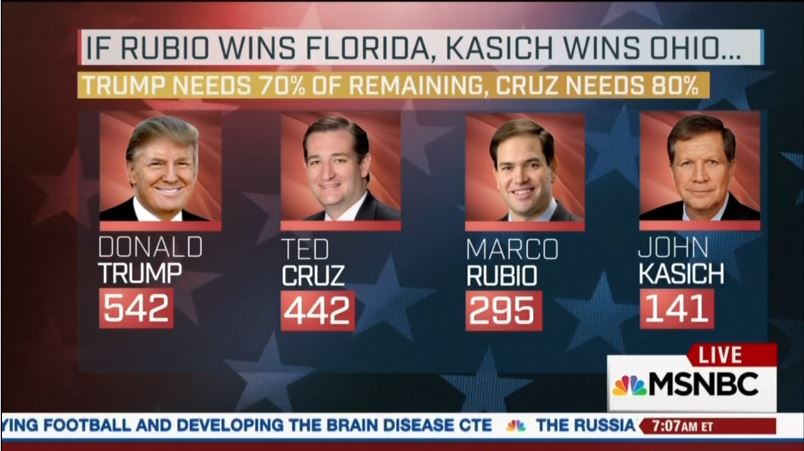 Mika, the overwhelming odds have it that Donald Trump's going to win this thing outright.” Joe Scarborough said of the fate of the GOP primary cycle.

The morning of the third Super Tuesday Scarborough declared the nomination belongs to his buddy Trump, even though the delegate math does not add up. “What are the numbers, Mark Halperin, if Trump wins Florida but loses Ohio to Kasich, he has to get 59 percent of the remaining delegates? Is that right?” Scarborough is correct, Trump would have to get 59 percent of the delegates in that scenario.

Washington Post contributor Chris Cillizza agrees with that assessment saying: “Trump, if you split Ohio and Florida, I don't know if he will, but if you do, it's roughly 60 percent.” Although, it’s hard to tell if Trump will win Ohio because all of the polls have Trump and John Kasich within the margin of error, with a few showing Kasich in the lead. Cillizza also pointed out that Kasich needs 112 percent and Ted Cruz needs 80 percent of the remaining delegates.

If Trump was to win both Ohio and Florida he would still need to get 51 percent of the remaining delegates. The panelist on Morning Joe seem to believe that in this scenario Trump is the de facto nominee and all other candidates need to drop out, even though 51 percent will still be difficult for him to achieve. The fact is, when Trump wins he mostly hovers in the high 30’s and has yet to get over the mid 40’s in any state, let alone break 50 percent.

Those facts coupled with Cruz and Kasich talking about taking their campaigns all the way to the convention, means it is unlikely Trump will have the delegates needed to win “outright” as Scarborough claims. Cillizza also concluded that there were only two scenarios for the GOP going into the convention. “Donald Trump as the 1,237 delegates nominee or a contested ballot convention.” A contested convention is only option for the #NeverTrump forces inside the Party.

Throughout the last week or so co-hosts Scarborough and Mika Brzezinski have been arguing that the GOP would be crazy to try to steal the election from Trump via a contested election. But the GOP leadership does appear to be desperate enough to try. And as Scarborough also said Tuesday morning “I'm just saying, after the David Duke de mer [French phrase for seasickness], after once again saying Islam is against all of us, after [the violence at his rally] Friday night, they have what they consider their justification.”

JOE SCARBOROUGH: So what if—what are the numbers, Mark Halperin, if Trump wins Florida but loses Ohio to Kasich, he has to get 59 percent of the remaining delegates? Is that right?

MARK HALPERIN: That's roughly right, and that's possible. You know. Like I said, I think the biggest variable is, assuming Rubio loses Florida, is this a three-person race or a two-person race? And I think the tale will be told by virtue of whether John Kasich can convince the donor class, the elected officials, people like Haley Barbour. Do they--  Mitt Romney, did they all come full-force for Kasich, allowing him to be a huge player, in some of these states. The northeastern states, the western states, I think in a three-way, if Kasich is alive and well we he be a competitor. Maybe not win but he can win.

NICOLLE WALLACE: Why wouldn’t they, Mark? I don’t see—

HALPERIN: I can't figure it out. But I’m telling you, but not one person I know. Not one source that I have has called in anticipation of tomorrow morning and said, “I'm going to be for Kasich.” Not one.

CHRIS CILLIZZA: I think, Mark is right. It's sort of fascinating, because I think if you look at the numbers, it's clear that Kasich is the best option. Because Rubio is going to lose his home state somewhere between 10 and 20 points. You can’t—You can stay in the race for as long as you want, but you're no longer viable at that point. I still think some of it is the result of people within the establishment not just dealing with the reality of the situation, which is, there are two options here. 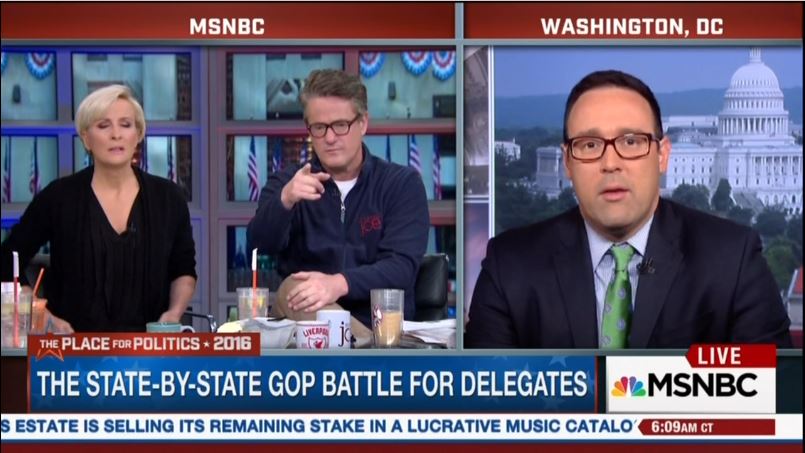 CILLIZZA: Donald Trump is the nominee or a contested convention. Because they look at the case, and remember Chuck Todd makes this really good point, which is Kasich needs to win 112 percent of the remaining delegates to be the nominee. So that's not going to happen, right? Cruz needs to win 80 percent. Trump, if you split Ohio and Florida, I don't know if he will, but if you do, it's roughly 60 percent. So they look at the Kasich number and think, “well 112 percent, he can't do it.

No one can do -- Ted Cruz isn't going to win 80 percent of the remaining delegates. So, I think it's this reality that there are only -- the path diverges in the woods. There are only two options. Cruz—Ted-- Donald Trump as the 1,237 delegates nominee or a contested ballot convention. Obviously, the establishment prefers the contested ballot convention. I think they think someone's going to suddenly – “hold on one sec, let me put this behind my back” and all of a sudden John Kasich is the-- there's not a secret formula that’s coming.

SCARBOROUGH: That's not going to happen. And let me say that at 10 after the hour right here, Mika, the overwhelming odds have it that Donald Trump's going to win this thing outright.