Media Research Center President Brent Bozell appeared on Thursday’s Varney and Co. to caution against the idea that the media are turning against the unpopular Joe Biden. He explained, “There is a catastrophe taking place within his administration so [some coverage] is going to have to be negative.”

But Bozell hammered the networks for repeating the President’s talking point that devastating new inflation numbers are “out of date”: “He makes a preposterous statement that that number is out of date.” Regarding high gas prices, the MRC president reminded, “When you look at the rising gas prices, by 11-to-1, they have blamed rising gas prices not on Biden's anti-fossil fuel jihad. Ergo, Inflation is caused by gas prices is caused by Russia. It’s all Putin's fault.”

STUART VARNEY: The media appears to be turning on President Biden. I can hardly believe it. But they are now openly criticizing the administration. Watch this.

VARNEY: Wow. How about that? Brent Bozell joins us this morning. Obvious question. Is the media really turning against the President? 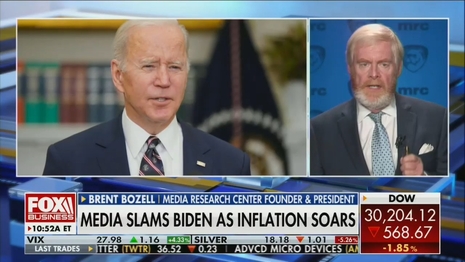 BRENT BOZELL: Well, I watched that last segment. If Joe Scarborough is on for an hour, an hour and a half, he’s bound to say something right. So let’s give him props for that.

VARNEY: I’m sorry to put Joe Kernen in there because he’s no liberal. I know that for a fact. A friend of mine.

BOZELL: Are they turning on Biden? Not necessarily. There is a catastrophe taking place within his administration so it’s going to have to be negative. But what gets me — and we have to watch for — is the spin. The spin is all important. I’ll give you an example of this. The New York Times comes out with a poll that shows — The 9.1 inflation rate that comes out, how does Joe Biden respond? He makes a preposterous statement that that number is out of date. No, it is an absolute fresh number that just came out. But he calls it out of date. The networks cover the story and what do they do? They all repeat Biden’s line, which is preposterous. But it’s even more than that. They then blame inflation on rising gas prices. When you look at the rising gas prices, by 11-to-1, they have blamed rising gas prices not on Biden's anti-fossil fuel jihad. But on Russia. Ergo, Inflation is caused by gas prices is caused by Russia. It’s all Putin's fault.

VARNEY: But if they are turning against the President to any degree, they are doing that because catastrophe looms in November and they want to ditch this President, they will do it sooner or later.

BOZEL: Yeah. Look at the poll that came out from the New York Times 64 percent of Democrats don't want him to run. Stuart, correct me on this. But I don't recall that number. Perhaps during the Nixon years you had those numbers against, the party turning against itself like this. Would that be news coverage? It has barely been covered by the networks. I think it was ABC, hasn’t even covered it yet. How could they not cover political catastrophe? They know the wheels of come off the administration, they've got to touch on things and they are doing that. But are they giving it the serious treatment of watching and administration collapse with everyone headed for the door? No, they are not.