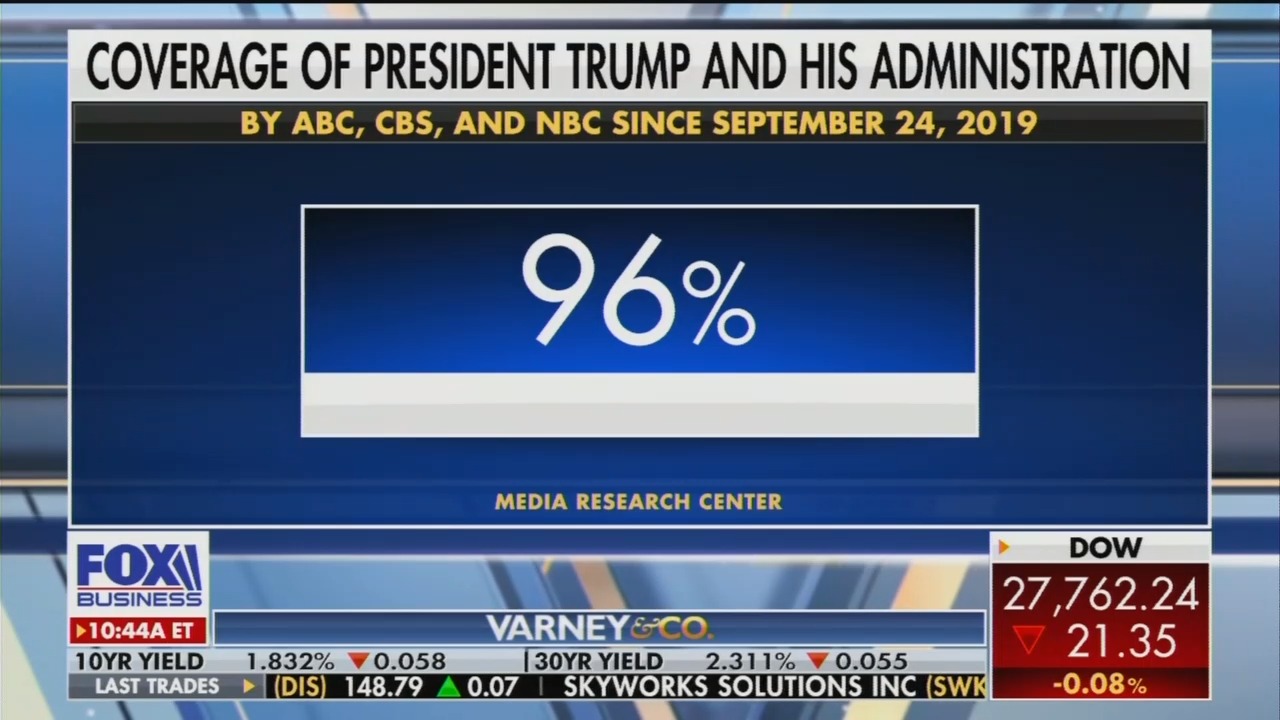 Media Research Center founder and President Brent Bozell on Thursday hammered the media’s “fake news, left-wing” agenda when it comes to covering impeachment. Appearing on Varney and Co., Bozell discussed a new MRC study finding that 96 percent of impeachment stories have been negative.

He explained, “Almost 100 percent of the media coverage is against Donald Trump. If this isn't a fake news, left-wing, biased agenda, you and I don't know what that means if it is not this.” Talking to host Stuart Varney, Bozell offered another stat:

Donald Trump, Commander-in-Chief of the United States, oversaw, ordered, and was successful in the taking out the single most dangerous terrorist in the entire world. Media coverage of Donald Trump? 67 percent negative. Think about that one.

But while media coverage of the U.S. mission against al-Baghdadi was mostly positive, the President’s role in it was not. Out of nine evaluative statements about the President himself, two-thirds (67%) were negative. These focused on his refusal to brief congressional leaders, as well as his belittling description of the cruel ISIS leader’s last moments (“He died like a dog....He died like a coward....Whimpering, screaming and crying.”)

JOE RICKETTS: She would ruin what we have.

LLOYD BLANKFEIN: She probably thinks more of cataclysmic change to the economic system as opposed to tinkering.

VARNEY: Okay. We're not going to show all of it for you, because we've not been paid but CNBC was. What is going on here is Elizabeth Warren, socialist, is buying ad time on supposedly capitalist network to trash CNBC's audience which I find fascinating. Media Research Center founder and President Brent Bozell is with us now. What is going on here, Brent?

BRENT BOZELL: You know, Stuart I think it is very clever, politically. She knows she will not turn off the billionaire vote. She turned them off from the very beginning. What she wants is, is earned media coverage, for us talking about it. That is what she wants. And she will get it in a lot of different ways. Very smart politics. You know, Stuart, here is the important thing where Elizabeth Warren and the media are concerned. Every economist, every serious economist, will tell you, that her plan, just Medicare for All, not anything else, just this one thing, is going to ruin the American economy. She says it will cost, $20 trillion?

Serious economists are saying, when you, when you factor in the damage that this is doing to the economy, with the money fleeing this country because of her, it will cost much, much more. So, she could be the, she is, if not the front-runner, she is in the top three possible Democratic nominees. You would think, Stuart, that a serious coverage of this woman would include a discussion of the fact that she has got a plan that could well destroy the American economy. Now here's the number. Since September, how much time have the networks spent on that one topic? Answer. Two minutes.

VARNEY: I got some other numbers and they're from you, Brent. Let me quickly do this. Your organization found that coverage of President Trump and his administration, by ABC, CBS, NBC, since September 24th, the beginning of impeachment trial, it has been 96 percent negative. I am not surprised, I'm astonished almost universally panning our president.

BOZELL: Exactly. Almost 100 percent of the media coverage is against Donald Trump. If this isn't a fake news, left-wing, biased agenda, you and I don't know what that means if it is not this. Here is a subset number that we found. This is a number that I find the most fascinating. Okay, Donald Trump, Commander-in-Chief of the United States, oversaw, ordered, and was successful in the taking out the single most dangerous terrorist in the entire world. Media coverage of Donald Trump? 67 percent negative. Think about that one.

VARNEY: On that issue alone. The big issues, 96 percent negative across the board. Brent, great stuff. Go ahead.

BOZELL: I think they need to find the whistle-blower, person who is doing it right.