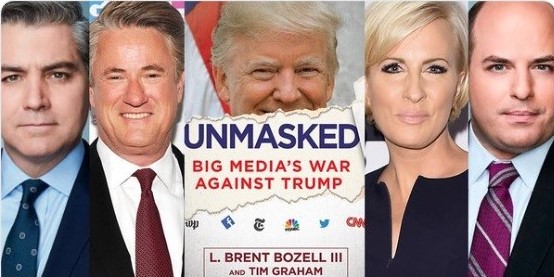 After months of hard work, Media Research Center founder and president Brent Bozell and director of media analysis Tim Graham have a new book out Tuesday titled Unmasked: Big Media's War Against Trump. Bozell and Graham bring all the MRC's research to bear on how the "objective press" used every tool in its toolbox to keep Donald Trump from becoming the President of the United States -- or remaining in that job.

It begins with a fascinating preface where Brent Bozell describes meeting with Donald Trump at his offices to discuss whether he should run for president, and he discovers a very different man than what he expected.

These are some of the other subjects explored:

The Trump Loss That Didn't Happen. Donald Trump sees his election victory as evidence the media put out “fake news” by implying daily that he could not win, he had no "path to victory." Every misstep of the way they believed -- hoped -- he was a dead candidate walking. Yet to their horror he seemed only to gain steam. The press had no idea how or why it was resonating.

Defining News as Biased, False, and Fake. Most news isn't "fake" in the sense that it's intentionally untrue. But a lot of news stories are biased, tilting that "first draft of history" in a decidedly liberal way. Sometimes, anti-Trump stories were false -- but the errors were unintentional. Fake news is the kind of "scoop" Dan Rather made to ruin George W. Bush. They knew their information was bad, and reported it anyway. A better word for a lot of news is "artificial" or "contrived," which defines all the worst narratives against Trump as "objective" news.

The Media's Never-Ending Negative Avalanche on Trump. During the election campaign and during his presidency, the media were relentlessly negative against Donald Trump. All these attacks backfired: the more the media attacked Trump, the more his support grew among conservatives, and hardened. He drew 90 percent negative coverage, and was elected. Then he drew 90 percent negative as president, and somehow the network executives thought this would be more damaging than it was before he was elected.

The Russia Obsession. The networks have devoted more than 2,200 minutes from the Inauguration to February 10, 2019 on the Russia probe, but just a few minutes to the Clintons and their wealth-building relationship with Russian businessmen and bureaucrats. They would say Hillary didn’t win, so who cares? But these are the same media sources who claimed Obama was “largely scandal-free,” because they feel they are the ones who define what scandals are and are not scandals. Bias by scandal selection is one of their most obvious and potentially damaging biases.

Where's the Good News? For the network news shows to be 90-percent negative about Trump, there was a lot of good news they would have to de-emphasize or ignore. The dramatic decline in unemployment is something they tried to downplay or skip, as was the healthy uptick in the stock market. Deregulation? Who thought that had an effect on the economy? Then there was foreign policy: the defeat of ISIS in Iraq and Syria was barely mentioned.

Fairness Dying in Darkness. National newspapers responded to Trump’s election with new slogans. “Democracy dies in darkness” was placed at the top of every Washington Post, and The New York Times aired ads saying the “truth” is “more important now than ever.” In their own minds (and in their mouths) America was entering an “authoritarian” phase. The liberal media pretend they are the only guardians and practitioners of the First Amendment, and slime the conservative media as “state-run TV” and worse. Saying “CNN sucks” is also a use of the First Amendment, not its repeal.

Flagrantly Partisan 'Fact Checkers.' It sounds terrific to assign “fact checkers” to review the accuracy of statements by politicians and political partisans. Unfortunately, the liberal media’s idea of “independent fact checkers” have historically assessed “facts” with a liberal spin. They obsessed over Trump, but transparent liberal lies from Barack Obama or Hillary Clinton are often ignored or downplayed. Conservative statements of opinion are called “lies” because they lack “context,” or so the liberal guardians of the facts proclaim. Overall, Republicans are “flunked” by fact-checkers at a much higher rate than Democrats.

As Bozell & Graham write, their arrogance overflows: "Journalists are the smartest people in the room, so smart they can't possibly be expected to just report the news. Thus, they grant themselves license to package it and analyze it with an intelligence only they seem to possess. They profess to believe in the power of facts, but what they really believe in is the power to proclaim facts. Facts exist to be bent to their will to further their narrative."

You can find Unmasked: Big Media's War Against Trump at any major bookstore or purchase it online here.