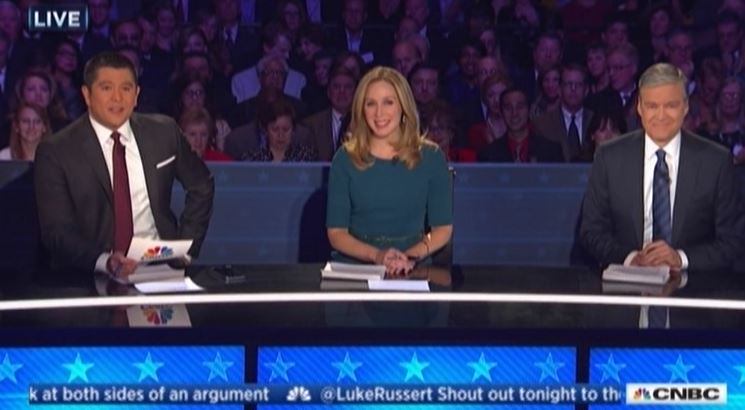 In contrast, all of the questions posed by CNBC personalities Jim Cramer, Rick Santelli and Sharon Epperson focused on policy matters and were phrased in a constructive, respectful tone.

The MRC analysis examined the 43 unique questions posed by one of the three moderators. Nearly two-thirds of those (28, or 65%) included negative spin, personal insult or attack, such as Harwood's question to Donald Trump asking if his was a "comic book version of a presidential campaign," or Quintanilla's question to Ted Cruz asking if his opposition to a just-passed spending bill showed he was "not the kind of problem-solver American voters want?"

This category includes questions to one candidate inviting them to trash another, such as Harwood's question to Mike Huckabee asking whether Trump has "the moral authority to unite the country."

The remaining moderator questions involved personal questions without a negative slant, or policy questions that were phrased in a non-insulting way. While not outright disrespectful, many of these policy questions, such as Quick's question to Cruz claiming a large pay gap between men and women, or Quintanilla's question to Kasich about legalizing marijuana, were framed from a liberal perspective.

In contrast, the six questions posed by Cramer, Santelli and Epperson were all focused on policy, and presented in a respectful manner, even if some of them had a liberal slant. For example, Cramer asked Dr. Ben Carson about the high cost of life-saving drugs: "Have these companies gone too far? Should the government be involved in controlling some of these prices increases?"

“Republicans had every right to be furious Wednesday night. Of all the terrible debates in recent American history -- and there have been many -- CNBC’s has got to be the absolute worst. The three main moderators, and in particular John Harwood, acted like petulant children trying to pick fights with the candidates. When nearly two-thirds of your questions are comprised of negative spin, personal insults or ad hominem attacks, your agenda is clear: undermine the Republican candidates at all costs. These CNBC "journalists" exposed themselves to the world as left-wing stooges jockeying for a position in Hillary Clinton’s campaign press shop. It was embarrassing.”

Below, a video montage created by the MRC's Geoffrey Dickens showing some of the most insulting questions posed on Wednesday night: