ABC's Jonathan Karl To NewsBusters: My Politics Are 'Fair And Balanced'

Jonathan Karl would clearly rather ask others about their politics than answer questions about his own.  In an impromptu interview at the RNC this morning, asked by NewsBuster Noel Sheppard what his politics are, an apparently uncomfortable Karl answered: "I would say fair and balanced: how about that?"  When asked in a follow up whether he thinks he is indeed fair and balanced, Karl sarcastically replied: "No. What do you think?"

Karl and his producer also seemed none too thrilled to be caught on camera by NewsBusters.  View the video after the clip. 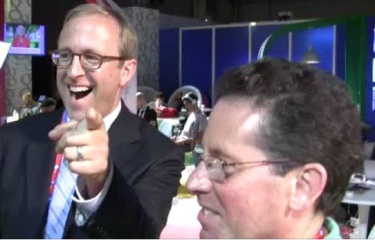 We'll be back with the transcript. In the meantime, watch what happens when NewsBusters turns the table on a prominent MSM figure.