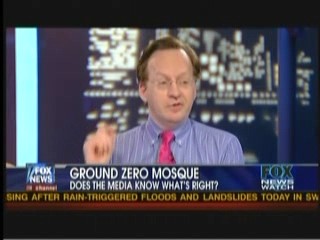 Jim Pinkerton on Saturday cited a Culture and Media Institute article about the hypocritical reporting of the proposed Ground Zero mosque.

Ground Zero mosque organizer Imam Feisal Abdul Rauf has been described by the media as a "moderate" and a "bridge-builder." But not too long ago, the same news outlets gave identical labels to a radical Virginia mosque that has been linked to some of the most infamous Islamic terrorist attacks in recent years.

When the discussion on Saturday's "Fox News Watch" moved to the Ground Zero mosque, Pinkerton brought this up (video follows with transcript):

JON SCOTT, HOST: Jim, the host of "Red Eye" here on Fox, Greg Gutfeld, kind of a comedy show, says he wants to open a gay bar across the street from this Islamic mosque and promote positive dialog. Now, a spokesman for the Islamic center said this, this plan does not consider the sensibilities of Muslims. Did the mainstream media pick up on the irony there?

JIM PINKERTON: I don't think so, but I think the reason, Andrea, why they don't have to write their own op-eds is because they got the New York Times shilling for them every, every morning. And the media are remarkably uncurious about the nature of this mosque. Alana Goodman, who writes for the Culture and Media Institute, went back and looked up that Abdul Rauf, you now, about he's a moderate, he's thoughtful, and all of this good stuff, they were using literally the same language about the mosque in Northern Virginia that Anwar Al Awlaki, the Yemen, the guy who's now in Yemen teaching killing Americans and the inspiration to this underwear bomber, and the Times Square bomber. They used the exact same words then that they're using now to describe this guy.