Recycling the mid-1990s liberal smear campaign against grassroots conservatism, CNN has posted an article on the new DHS threat report complete with a Getty Images photo (shown at right) of neo-Nazi and white supremacist flags. 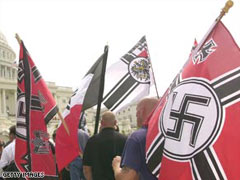 If the report were about Nazi extremists, that picture would be warranted. However, the DHS report warns against an amorphous “right-wing extremism,” failing to mention by name any particular threatening group or intelligence of any planned attacks.

The DHS report did cite returning war veterans as at-risk for recruitment by right-wing extremist groups. It seems strange to think that those men and women who risked their lives to protect this country and their government could be or become Nazis, but that seems to be the implication.

Moreover, one wonders where exactly the CNN report on the other extremism report was. A similar report, on left-wing extremism and entitled “Leftwing Extremists Likely to Increase Use of Cyber Attacks over the Coming Decade,” received the attention of exactly zero media outlets since its release. The AP today reports that this document was released in February, although it is unclear when media outlets received it.

In point of fact, the non-classified version was published on January 26 and cited several liberal extremist groups by name, as potential security threats:

Which organizations does the DHS report on right-wing extremism name?

What threats do these two sides pose? The right-wing side is alleged to be recruiting former members of the military (a la Timothy McVeigh) for their expertise in tactical warfare and explosives. The left-wing side is alleged to be recruiting cyber-warfare experts for the purpose of destroying large corporations through the application of cyber-terrorism. Targets include Huntington Life Sciences, Wachovia Bank, Staples Office Supply (really?!), and assorted financial and investment firms.

So on the one hand, we have anarchists and environmental extremists listed by name, whose express purpose is to destroy productive corporations through cyber-terrorism – and zero reports until today's AP wire story.

On the other, we have a leaked report which names zero particular right-wing organizations, and zero potential victims of said organizations, yet there’s a media firestorm. It could possibly be that this line of thinking is caused by right-wing paranoia. Or, it could be that the media, with CNN as a shining example, is utterly biased. Yeah, I’m going with the latter.

Jack "The Hack" Cafferty has recyled the same Nazi picture to bash conservatives on his CNN blog.  But there is an interesting new development, found in this quote:

Meanwhile at least one conservative radio talk show host suggests that this report is meant to step on free speech and First Amendment Rights — which the Department of Homeland Security denies. It’s probably worth pointing out that the Obama administration also issued a warning about left-wing extremists in January.

It's probably also worth pointing out that nobody reported anything on that warning until yesterday (April 15th, 2009).  Nobody could possibly know which newsrooms got that report and when, but the question still remains:  Why is the media fascinated with amorphous "right-wing extremists" when there are clear and present dangers named in the other report?