However, on January 12, then-President Obama ordered the ending of America’s longstanding “wet foot, dry foot” policy, which had allowed Cuban refugees entrance to the United States. But the broadcast networks were largely silent. Between them, ABC, CBS and NBC only spent 68 seconds during their news coverage the following morning – nearly 57 times the coverage from Trump’s policy change than Obama’s.

Both actions severely limited immigration from certain regions, but CBS This Morning and NBC’s Today hyped the Castro regime “praising” Obama’s policy decision. In contrast, the coverage of Trump’s executive order has been overwhelmingly negative, with NBC’s Today even going so far as to suggest a link between Trump’s immigration ban and a mass shooting at a mosque in Quebec, despite a complete lack of evidence. 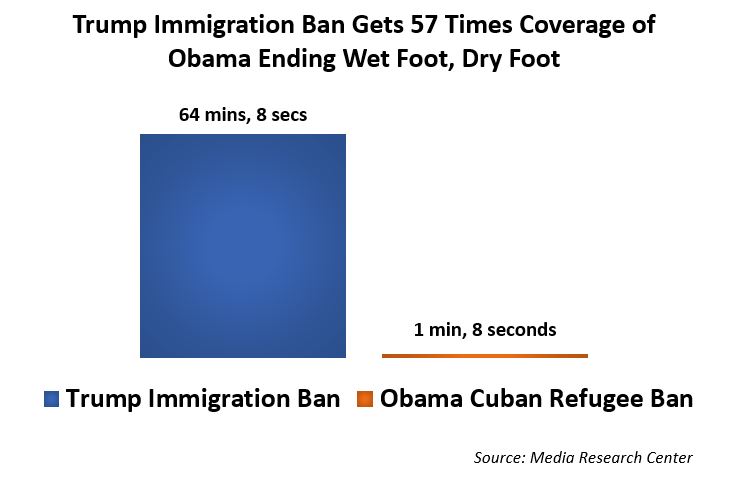 But this wasn’t the only instance of the networks ignoring one of President Obama’s bans on refugees. It wasn't until 2013 that ABC News reported that "State Department stopped processing Iraq refugees for six months in 2011," after the discovery that two al-Qaeda operatives had used the program to enter the U.S. and move to Bowling Green, Kentucky.

The story was featured prominently on the November 20, 2013 editions of ABC's World News Tonight (3 minutes, 25 seconds), Good Morning America (two segments totaling 3 minutes, 34 seconds), and a 10 minute, 19 second feature report on Nightline. Most of ABC's coverage was about the deficiencies in the refugee vetting that permitted the terrorists to infiltrate the U.S., with only a couple of sentences spent on the six-month moratorium.

But CBS and NBC never followed up on the story, and ABC dropped its coverage after that single day of attention.