Despite repeatedly calling it “unconfirmed” and “unsubstantiated,” the ABC, CBS and NBC morning news shows on Wednesday spent a combined 44 minutes promoting allegations the Russian government had information that they could use to blackmail President-elect Donald Trump.

These allegations stemmed from a 35-page “report” published by BuzzFeed, which itself doubted the veracity of the information. According to The Washington Examiner, “BuzzFeed Editor-in-Chief Ben Smith published an internal memo to his staff on Twitter wherein he said that posting the intelligence document was ‘not an easy or simple call’ and he said there was ‘serious reason to doubt’ the claims it contained.’” 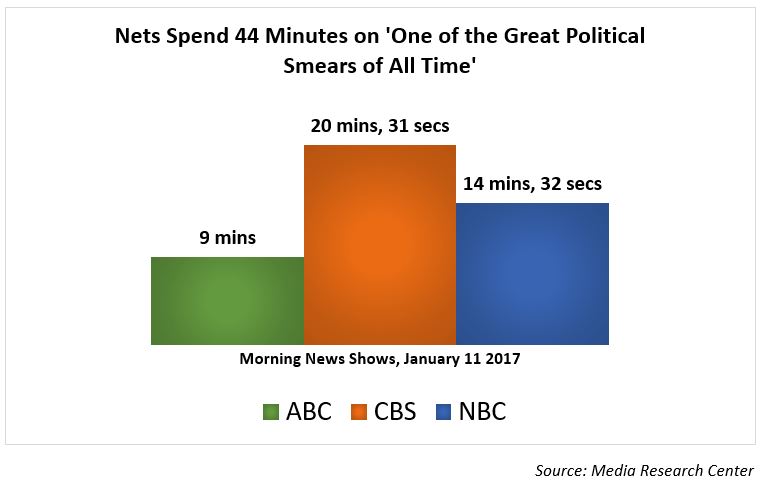 On Good Morning America, ABC Chief Investigative Correspondent Brian Ross summed up his report by covering the entire gamut of possible outcomes: “If true, they [the allegations] are a grave national security issue. If false, one of the great political smears of all time.”

Matt Lauer kicked off NBC’s Today show with an astounding amount of disclaimers, “[l]et’s go right to the breaking news: potentially explosive yet, we caution, unverified reports that the Russian government has compromising information about Donald Trump. The information was included in briefing materials and it was based on separate – a separate longer document paid for by political operatives and opponents of Mr. Trump, which included unsubstantiated allegations of sexual activities by him in Russia.” Today then spent more than 14 minutes speculating on this topic.

On CBS This Morning, co-host Gayle King admitted that her news organization couldn’t confirm these reports, but made sure viewers know where they could find the sleazy details: “There's a 35-page report that was released online by BuzzFeed yesterday that details potentially damaging personal and financial details by President-elect Trump, during a past business trip to Russia. CBS News cannot confirm the authenticity or origin of the documents, so we're not going to report on any of those details. But Congress is asking questions about why the Russians may know about President-elect Trump.”