When Jill Stein was the Green Party’s candidate for U.S. president, the networks only gave her 36 seconds of coverage. However, as soon as she launched a campaign to contest the presidential election and demand a recount of ballots in several key states, the evening news shows on ABC, CBS and NBC managed to find 7 minutes and 26 seconds of coverage for her in just four days. That's more than 12 times as much coverage as in the entire campaign.

On November 26’s NBC Nightly News, anchor Lester Holt began a story on the recount by implying that the election may not be over yet, “if you thought the presidential election was behind us, word came today from the Hillary Clinton campaign that it will back the state-wide election recount effort put on by third party candidate Jill Stein in three key battle ground states.”

Holt then turned the story over to correspondent Kristen Welker, who led by saying that the recount was prompted when “a group of computer scientists, including a voting rights lawyer, said they found voting irregularities in three states.”

Despite this drastic uptick in coverage, Stein admitted that her team was working without proof. “Let me be very clear,” Stein told CBS Evening News’s Anna Werner during a November 24 interview, “we do not have evidence of fraud. We do not have smoking guns. What we do have is an election that was surrounded by hacking.” 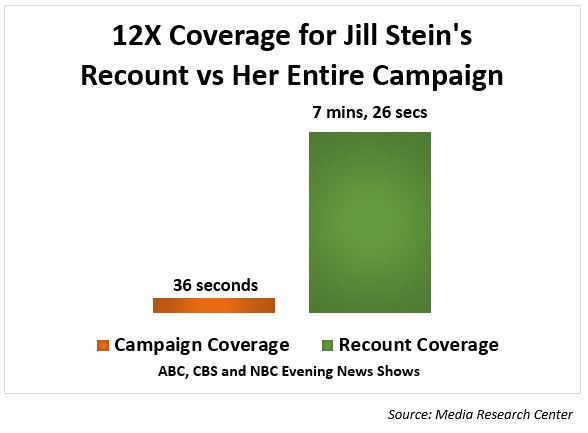