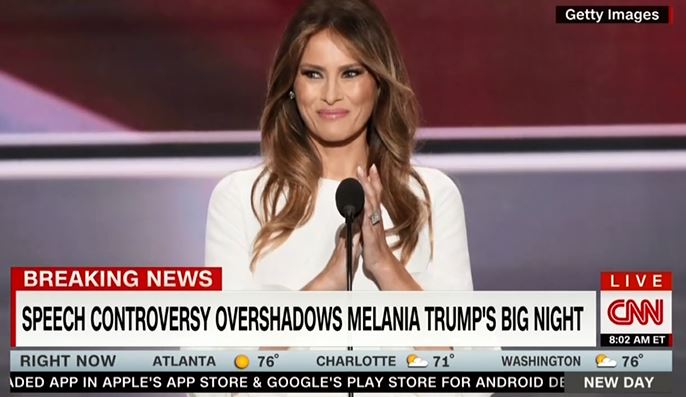 The morning after the first night of the 2016 Republican National Convention, all six broadcast and cable network morning news shows pounced on the fact that Melania Trump's much-touted speech shared similar phrasing with Michelle Obama's 2008 speech to that year's Democratic convention.

The flap over Mrs. Trump's speech swamped all other convention topics, especially on cable. An examination of ABC, CBS, NBC, CNN, MSNBC and Fox News Channel coverage from 7am ET to 9am ET (a time when all six networks are providing live coverage) found 130 minutes devoted to Mrs. Trump's speech, or nearly one third of the available airtime. 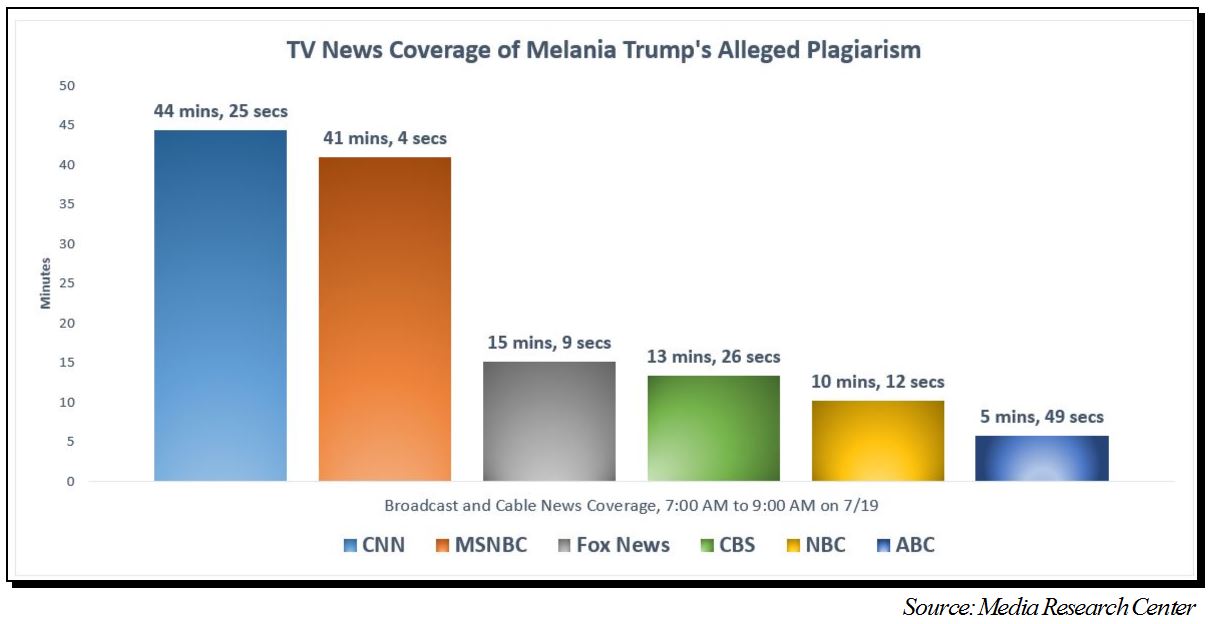 CNN's New Day was the most zealous in covering the speech controversy, with 44 minutes, closely followed by MSNBC's Morning Joe, with 41 minutes (statistics are for the 7am to 9am ET hours only, although obviously there was much coverage both before and after those hours).

On the broadcast networks, CBS This Morning was the most aggressive in its coverage, clocking in at 13 minutes, 26 seconds. NBC’s Today gave the story 10 minutes and 12 seconds, while ABC’s Good Morning America provided 6 minutes of coverage.

On Good Morning America, correspondent Tom Llamas was accusatory. "Many are saying she stole sections of that speech directly from Michelle Obama's 2008 convention speech."

CBS This Morning was quick to dub the incident “copy-gate,” a moniker that none of the other networks seem to have picked up. “Well, it’s got a “gate” behind it now, already. Gosh, this is so fast. A gate by this hour of the morning,” CBS Political Director John Dickerson quipped. Later in the broadcast, co-host Norah O’Donnell asked “given this controversy, does that help the effort to reach out to women voters, gain new voters?”

CNN’s Chris Cuomo went a step further than the other morning show journalists, claiming that it was deliberate and would have implications for the future. "Lying matters. If you lie small, you'll lie big in politics." On MSNBC’s Morning Joe, Mark Halperin foreboded that “"I think by the end of today, probably sooner, someone in the campaign’s going to take responsibility for this and have to leave.”

UPDATE, 2:25pm ET: In contrast, ABC, CBS, NBC and FNC during these hours collectively provided a mere 1 minute, 48 seconds of coverage to Pat Smith's emotional speech condemning Hillary Clinton's inept handling of Benghazi. From 7am to 9am ET, MSNBC did not discuss Smith's speech (although they briefly mentioned it during the 6am hour of Morning Joe).

CNN's New Day spent no time on the substance of Smith's speech during these hours either, but devoted nearly 2 minutes to co-anchor Chris Cuomo's doubts that Donald Trump was telling the truth when he said he watched her speech and liked it.

Special thanks to Geoff Dickens, Kyle Drennen, Kristine Marsh, Samantha Cohen and Remso Martinez for contributing to this report