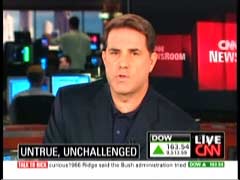 On this afternoon's CNN Newsroom, anchor Rick Sanchez briefly updated his audience on Rush Limbaugh's medical condition.  He completed his comments with "We wish him well."  Sanchez's good wishes didn't square with the Twitter messages that crawled at the bottom of the screen for his entire program.

Here is a sampling of the tweets he aired:

rush is an excuse for people to be vicariously racist. I have nothing good to say about him except "gotta love karma"

Rick can we get some answers on if rush's insur. will pay for his hospital stay if it is found out drugs were a part of this

I don't like to wish bad luck on people, but a 2010 without Rush's mouth going off would be fine with me

under yr new health plan Rush may pay higher premiums cuz of weight. Time to hit the treadmill and lose the weight Rush

May rush be worked on by a liberal democrat, feminist doctor who is pro gun control :)

Rush shld take this opportunity, being a New Year, 2 reflect on his treatment of ppl who disagree w/him. His ways R is wrong

Rush: I hope it's nothing serious; just something that will keep him off the air for the next 40 or so years :)

re Rush, ummm. . .I have to go try that old saying, "if u can't say anything nice, dont say anything at all" lol (biting my tongue)

I'm not fond of Rush L. but I wish him the best. Maybe he will be a little kinder. . . nah

Can't you just feel the love?  Liberals like Sanchez often characterize conservatives as mean-spirited.  Mean-spirited is the ultimate epithet in the liberal lexicon. It's the adjective that they never tire of using, of ascribing to anyone who doesn't share their views. For decades we've been subjected to its wearisome reiteration.

If Sanchez truly wished Rush well, he could have provided some balance to those mean-spirited comments.  He didn't.  Then again, judging by their spiteful observations, many of his viewers wouldn't want him to.
Media Bias Debate Bias by Omission CNN CNN Newsroom Rick Sanchez