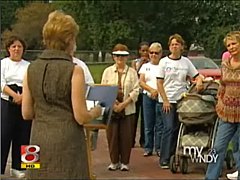 There's a heartwarming story in today's Times of Northwest Indiana. Jane Pauley, one-time co-host of NBC's Today and Dateline NBC programs, made an appearance yesterday for Barack Obama. Joining her was Steve Skvara, the retired steelworker who in August of last year tearfully asked Democratic presidential candidates at a debate, "What's wrong with America? And what will you do to change it?" The Times reported:

Pauley, who said she worked for the state Democratic Party before launching her successful news career, took part in a panel discussion aimed at touting the benefits of Obama's economic plans for Hoosiers over that of his Republican challenger John McCain.

While the subject matter was complex at times, Pauley occasionally took the opportunity to inject partisan humor into the discussion.

"Why would you want a maverick when you've had a cowboy in the White House for two terms already?" she asked, referring to McCain's description of himself.

Alas, Jane's witty comment didn't enjoy as much currency as it deserved. That's because only eight people showed up for the rally. Late notice was cited for the pathetic turnout.

The small gathering didn't discourage Skvara, a favorite with the Communist People's Weekly World. He gave the obligatory McCain "scares me to death" statement and continued:

He said McCain opposes federal rules and regulations and yet that has repeatedly led to catastrophes, whether it was the savings and loan crisis during the 1990s or the current mortgage crisis.

Playing off President Bush's claims of wanting to put more control into people's hands as part of an "ownership society," Skvara said the country is headed in the opposite direction.

"It's going to be the homeless society," he said.

Last year Steve tugged on liberal heartstrings with his plaintive, "What's wrong with America?" That only eight people showed up to see the Pauley-Skvara duo supporting Obama is evidence of what's right with America.

See also this local tv report of the campaign stop, which does not mention how few people showed up.