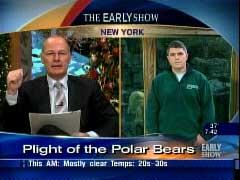 Global warming is killing the polar bears? Sounds like a fund-raising letter from Greenpeace or the World Wildlife Federation, but it was actually the subject of two stories on Thursday’s "Early Show" on CBS. CBS News correspondent Thalia Assuras delivered a brief report and "Early Show" Co-host Harry Smith , talked with Jeff Sailer, animal curator at New York City’s Central Park Zoo, and gushed that the U.S. government is "finally acknowledging" that the earth is getting warmer and the polar bears’ habitat is shrinking. But it doesn’t sound like the government is acknowledging that here.

However, Smith and CBS ignored opposing facts on global warming. According to a study from the Business and Media Institute, a division of the Media Research Center, in 1938 a British scientist declared that carbon dioxide emissions were heating up the earth, then in the 1970s publications were complaining about global cooling, now the media is once again focusing on global warming. Given this evidence of temperature cycles, it is quite likely that global warming is a naturally occurring phenomenon that is beyond the control of man. Yet, scientists who argue these facts are not featured on CBS nor are these points of view even presented on.

Harry Smith: "Hey, how much trouble are these polar bears in."

Jeff Sailer: "Well, they're actually in a lot of trouble. The amount of sea ice in the arctic has been decreasing for some time now, and the polar bears really depend on this as a means to reach their food, which is primarily seals."

Harry Smith: "And, you know it's interesting that the government has made this move because several environmental groups have been pushing for this for a long time. What does it mean that our government has finally acknowledged that the world is warming and that their habitat is shrinking?"

Jeff Sailer: "Well it's really an amazing thing. Its--the polar bears are sort of a poster child for this whole problem and they represent all the species that are going to be threatened in the near future as a result of the sea ice decreasing in its magnitude. So it's really a great thing; it'll really allow for people to focus on the problem and will give us this great species to sort of rally the defense of the sea ice."

Harry Smith: "Yeah, people love polar bears. One of your animals is just over your shoulder there. We love to come to the zoo and take a look at just how magnificent they are. How much trouble are they in? How many are there now and how has the population been decreasing?"

Jeff Sailer: "They're thought to be between 20 and 25,000 polar bears right now. Which, you know, to some people may seem like a lot. But when you consider the massive amount of area that these bears range across, it's actually not that many animals. The biggest problem with them is they're having to spend more time swimming between ice floes because there's less and less ice and animals are actually drowning in the process. So, they're actually in a lot of trouble."

Harry Smith: "Yeah, we've seen video of that from Norway, for instance, this past summer with these polar bears that literally die drowning as they're trying to swim in from ice floe to ice floe. If the ice continues to melt at the rate it's melting now, how much longer for the polar bears?"

Jeff Sailer: "Well, right now we're thinking they could be gone within the next hundred years, when the sea ice itself is gone. The Wildlife Conservation Society has actually just received a grant to try to identify those areas where the sea ice will last the longest and where we can target and focus our efforts for polar bear conservation in hopes that there'll be time to reverse global warming."

Harry Smith: "Yeah, kids love these animals. You know, families are sitting at home watching this, what can people do?"

Harry Smith: "Alright, Jeff Sailer thanks very much for taking the time to speak with us today. We do appreciate it."