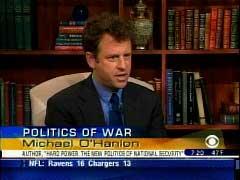 Making his 16th appearance of the year on the "Early Show" on Monday, Brookings Institution senior fellow Michael O’Hanlon promoted his new book, "Hard Power: The New Politics of National Security," criticized Democrats for not having a National Security plan, and, unlike his 15 previous appearances, was labeled a Democrat. Yet, regardless of O’Hanlon’s criticisms of the Democrats, or observations of what Republicans are doing well, this is yet another example of the "Early Show" allowing a Democrat to offer election year advice to the Democratic party with no balance on the other side.

Storm began by inquiring about accusations made by Bob Woodward in his book, but soon changed the subject to the Democrats lack of a national security plan, while mentioning O’Hanlon’s party affiliation:

"We've got the midterm elections five weeks away, and you talk extensively in the book about how Republicans have dominated Democrats on the issue of national security, and you really take Democrats to task as a Democrat yourself and you say look don't change the subject, don't be talking about the Foley scandal or something else. You've got to come back and engage the Republicans on this issue. Why haven't the Democrats had a national security strategy?"

O’Hanlon conceded that the Republicans have an advantage when it comes to national security, but suggested the Democrats can overcome that by simply talking about the issue more. But in the next sentence admitted the Democrats have no national security plan of their own, and he admitted President Bush has a pretty good plan when it comes to the War on Terror:

"Well, they have to take it seriously and talk about it all the time. Now, they are talking about it now in a way that's justifiable because they're saying Mr. Rumsfeld and Mr. Bush have not done a good job in Iraq. And, there is a certain accountability here that's fair in a democratic system. The incumbents haven't done a good job so the voter might want to look elsewhere. But, over the longer term, Democrats need their own strategy, long term strategy to win the War on Terror. Mr. Bush has his democracy proposal. That's a good one, and it's in a strong American bipartisan tradition, but it's not enough. We've got to see Democrats engage on that one too; they've also got to learn from the few things that Rumsfeld has done well at the Pentagon. He's done a few things well. We've got to do that and look at that stuff and emulate that."

If the Democrats have no real plan, what does O’Hanlon suggest they talk about to become credible on issues of national security? Does he believe that simply by increasing their rhetoric about cutting and running in the War on Terror, it will win them the support of American voters? Given that he did not denounce the Democrats as too liberal on national security and once claimed that Bill Clinton had a strong record on national defense, he may very well mean exactly that.