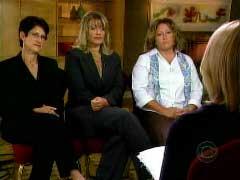 On the September 10 episode of "Sunday Morning," Katie Couric talked with the "Jersey Girls," the 9/11 widows who endorsed Senator John Kerry for President in 2004 and have been highly critical of the Bush administration. However, there was no balance or features of 9/11 families who support President Bush such as Debra Burlingame, who lost her brother in the terror attacks. In the piece, Couric just barley touched on the groups endorsement of John Kerry in 2004, while she picked out select quotes from Rush Limbaugh, (no date given for his supposed remarks) and a quote from Ann Coulter's book "Godless" that present the views of those who disagree with the 'Jersey Girls' as being unsympathetic to their loss:

"But taking sides came at a price. Rush Limbaugh referred to you all as Democratic campaign consultants, not grieving family members. Ann Coulter, in her book wrote, 'These broads are millionaires, reveling in their status as celebrities, and stalked by grieferazzis. I've never seen people enjoying their husbands' deaths so much.'"

Couric then followed up with a question about Coulter:

"Did it make you crazy, though? I mean, she got a lot of publicity."

But wasn’t it Ms. Couric’s former colleague Matt Lauer on the "Today" who gave Ms. Coulter much of the publicity Couric wants the widows to criticize?

In response, one of the women, Lorie Van Auken, dismissed the criticism of Mr. Limbaugh and Ms. Coulter claiming:

"We fought for their safety as well as our own. We were never coached by anybody, never funded by anybody."

Yet an April 8, 2004 "Media Reality Check" from the Media Research Center proves otherwhise. Among other facts, the report shows how the group received coaching from two of the Senate's most liberal members:

"In their front-page widow story, the "New York Times" noted that liberal Senators Ted Kennedy and Charles Schumer were advising the widows to demand Bush and Cheney also answer commissioner questions (and speeches) on live TV."

The "Jersey Girls" are certainly entitled to their political opinions and to use the political system to promote an agenda, as all Americans are. What is not acceptable is for a network to exclusively promote their views while excluding the voices of families who disagree. Like America, the views of families of victims of 9/11 are vast and if time is given to one side, equal time and consideration should be given to all sides.