The View on Wednesday took issue at a recent video from Ted Cruz, in which he talks about encouraging staff using Star Wars voices. After the clip played, The View began a barrage of comedic jabs at Cruz’s expense. Michelle Collins began with “Did you see what a co-worker said?” Joy Behar interrupted Collins’ thought, saying “The bird flu is more popular than Ted Cruz.” Collins laughed at the bird flu joke, and continue her previous setup. “One co-worker said why do people take such an instant dislike of Ted Cruz? It just saves time.”

Behar would make the argument that Ted Cruz is so unlikeable that “The Republicans don't like him.” While Candace Cameron Bure would try to offer some relief from the attacks by pointing out that Cruz is leading in Ohio, therefore “Some people like him.” Whoopi Goldberg interjected the defense by Bure, rambling “Yeah, but you know, so many people have been leading in Ohio and all. It's just kind of crazy, you know.”

In the video you can see that Collins and Behar are reading from a paper. The article they were citing is Times columnist Frank Bruni’s opinion piece, Anyone But Ted Cruz, in which the coworker quoted by Collins was a member of George W. Bush’s 2000 presidential campaign. However, National Review back in March 2015, wrote how Cruz ruffled feathers by pushing to reduce regulations. NR covered Cruz’s career from July 2001 to January 2003, when he was the Director of the Office of Policy Planning at the Federal Trade Commission.

See the relevant transcript below.

WHOOPI GOLDBERG: Well here's an interesting story. Candidate Ted Cruz is rising in the polls and he's taking a page from Trump about being an entertainer. Take a look.

TED CRUZ: A message that I give to folks on the campaign sometimes, they'll say we tried and my response is straight out of Yoda. Hmm, there is no try. Do or do not. And likewise, if someone does something very impressive, I'll turn to them just like Vader and say, the Force is strong with this one. That's America and I'm really excited about the new "Star Wars" movie. 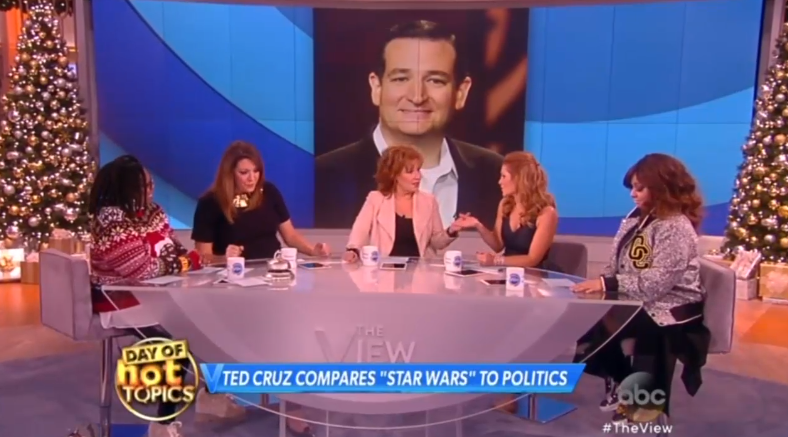 MICHELLE COLLINS: Do you ever get secondhand embarrassment, do you know about that? Where you see something to embarrassing you become like a mannequin like you can't move. I'm like a body’s exhibit right now, I'm just flesh.

COLLINS: Did Hillary do Yoda? Because I would be impressed.

BURE: I don't think presidential candidates should be doing impressions, in general. Marco Rubio please don't do any impressions. Please.

COLLINS: It's like I do a great Eddie Murphy. And then it’s lights out. Anyways, I would love that.

BEHAR: Ted Cruz, and Hillary Clinton has issues with being popular and likable also, but his roommate at Princeton -- he went to Princeton. He's a very smart guy, that's why got to watch him. But when he was in Princeton, his roommate, it was in the Times today, his own roommate, hello, said that he would rather pick somebody from a phone book to be president than Ted Cruz. This is somebody who was in the bedroom with him, okay?

COLLINS: Did you see what a co-worker said? This is my favorite.

BEHAR: The bird flu is more popular than Ted Cruz.

COLLINS: Bird Flu, I love a good bird flu. One co-worker said why do people take such an instant dislike of Ted Cruz? It just saves time.

BEHAR: It's on old joke, because eventually you will get to dislike him. The Republicans don't like him.

BURE: Yet he's leading in Ohio right now. So some people like him.

GOLDBERG: Yeah, but you know, so many people have been leading in Ohio and all. It's just kind of crazy, you know.