The far left host argued that the Trump campaign has no way to attack this Democratic ticket:

The President's Twitter account rolled out their attack video, accusing Kamala Harris being part of the, get this, the radical left, immediately after Joe Biden made his announcement, and that apparently is all they have. The Trump campaign has been chomping at the bit for someone to attack, something to stick, and they seem to have only this attempt to tie a decidedly moderate ticket to the radical left.

The problem with Velshi’s characterization of the Biden-Harris ticket is that it is, in fact, a radical-left ticket. Harris has been a supporter of Medicare-for-All, the Green New Deal, and has said she’d take executive action on gun control. The leftist media wants Americans to think that Harris is a moderate, because her actual policy perspectives are not very palatable. In fact, according to some measures, Harris is the most liberal sitting Senator.

Velshi continued pushing the false narrative that the Trump team has no way to attack the Biden-Harris ticket:

They knew what this ticket was going to be for a long time. I mean I remind people, people have been, Republicans have been trying to attack Joe Biden for so long that it got Donald Trump impeached. They don't seem to have much.

Whether or not the left would like to admit it, according to a Gallup poll, most Americans are center-right, and liberal ideology has been falling. Their label of Harris as a moderate is a complete lie, and is being used to manipulate voters into thinking that they aren’t voting for one of the most far-left tickets in American history.

Velshi poised a question to left-wing activist Aimee Allison, who runs an organization that helps women of color in politics, and widely suggested that there was only one way for Trump to respond to the Harris pick—drop Mike Pence:

There's stuff in the ether that suggests th 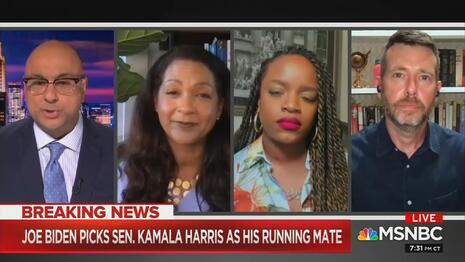 at the Trump campaign’s worried enough about the effect, the positive effect that Kamala Harris is going to have that they may be looking at options versus Pence. I don't know if they'll come to you, because you seem to sort of have a direct line to the best women in politics. But do you think it's possible that Donald Trump is going to try to find somebody to go up against Kamala Harris?

Velshi virtually said here that Trump should pick a woman of color as his running mate, because in his eyes playing identity politics is the only way to win. In no way should the American people fall for these leftist media tricks, and lies about the Biden-Harris ticket.

This Biden-Harris campaign promotion was sponsored by Chevrolet and ADT. To fight back against MSNBC, follow the links to contact their advertisers.

MSNBC’s All In with Chris Hayes

ALI VELSHI (MSNBC HOST): Ever since Joe Biden announced he was running for president, way back in April 2019, Republicans, especially President Trump, struggled to effectively attack his candidacy. Now that Biden has picked Kamala Harris as his vice president, they don't seem to have much on her either. The President's Twitter account rolled out their attack video, accusing Kamala Harris being part of the, get this, the radical left, immediately after Joe Biden made his announcement, and that apparently is all they have. The second part of the ad shifts to repeating the same things against Biden. Just a short time ago, Vice President Pence made the same allegation to a crowd in Arizona. The Trump campaign has been chomping at the bit for someone to attack, something to stick, and they seem to have only this attempt to tie a decidedly moderate ticket to the radical left.

Joining me now, Aimee Allison, founder of She The People a Network of Women of Color Working for Political Change, and Britany Cunningham, former member of President Obama's 21st century policing task force. And two women who I have relied upon heavily in this conversation about who the next president and who the next vice president is going to be. Thanks to both of you for being here. Aimee, let me start with you. You took a very, very active role in giving voice to the women who are running not just for president, but across the board in American politics. How are you feeling tonight?

AIMEE ALLION (SHE THE PEOPLE FOUNDER): I'm pretty—I’m feeling pretty good. I mean, you think about it, over the last few months, all the terrible things that are happening, we started saying what is the most strategic, powerful thing that Joe Biden can do to smooth away toward winning back the White House, recognizing the power of women of color, particularly black women voters, and recognizing that we want to govern and we want to lead. Putting Kamala Harris on the ticket is a signal that the Biden campaign sees us, hears us, and is ready to make space for us to be governing partners, as we move America forward. It feels great. I mean, Kamala Harris, Senator Harris is from my hometown here in Oakland, and to see her rise from San Francisco D.A. Through her work in California all the way to the Senate, to hear her advocacy, particularly in times of economic need, right now in times of racial unrest, her calling for racial justice. It means so much for me personally and for millions of women of color. And I believe this is what we needed in order to deepen the enthusiasm and turn out women of color the most loyal Democrat, Democrats in historic numbers in November.

VELSHI: Brittany Packnett Cunningham, this was an important thing for a lot of people to have a -- we knew it was going to be a woman, but a person of color. Given the moment that we're in, setting aside the fact that we're celebrating 100 years of women voting, the point is, setting aside the unique difficulties faced by people of color in this country, but the point is we are in a moment right now. What happens now that Kamala Harris is the vice presidential candidate, how does that translate in the next 80 something odd days before the election?

BRITTANY PACKNETT CUNNINGHAM (OBAMA’S 21ST CENTURY POLICING TASK FORCE MEMBER): Well, you can ask any black woman. We know that we have to be tougher, stronger, better, faster. Twice as prepared, twice as ready to take on the hard things. Kamala Harris I fully believe is more than prepared to take that on. Black women have had to do that throughout history and throughout our lives, and this moment is no different. You know, it is really something to be standing, not just looking at history, but recognizing all of the incredible ways in which black women are responsible for expanding the American political imagination, whether it's organizers in the streets or policymakers like Kamala Harris and so many others. We have to recognize the power that black women have to rise to the occasion every single time. And I believe that this is no different. But what we'll also continue to see, because black women are so brilliant and bold and powerful, we will see particular attacks that are more unique than what we've seen against just women generally. So we've heard the word misogyny thrown around, and it is necessary and accurate. But we can actually be more precise. We can use the word misogynoir, which was created by a black feminist which is specific to the intersectional discrimination that black women face. We have to get familiar with it and we have to be ready to defend against it, irrespective of what your politics are, because that shouldn't be welcome in the American discourse.

VELSHI: Good point. And by the way, Brittany, I feel like I saw you on the cover of a magazine like in the last couple of weeks. So I'm kind of having a little bit of a star-struck moment. I want to bring in David Plouffe, he was the campaign manager for Barack Obama’s historic 2008 campaign. He’s the author of A Citizen’s Guide to Beating Donald Trump. You know, David, I'm already seeing it on Twitter, people are mad at me because I'm talking about the attacks that are coming. Part of it is because it has become a little underwhelmed. They knew what this ticket was going to be for a long time. I mean I remind people, people have been, Republicans have been trying to attack Joe Biden for so long that it got Donald Trump impeached. They don't seem to have much.

DAVID PLOUFFE (OBAMA 2008 CAMPAIGN MANAGER): No. Well, the Trump and his campaign has been pathetic and incompetent and ineffective. Their attempts to launch various [inaudible] at Biden. So there's no doubt they're going to try to swing Kamala Harris now into that chair. But at the end of the day, one, people vote for the top of the ticket. I think Kamala Harris is going to bring energy to the ticket. She's got two big moments. Next Wednesday her convention speech and October 7, the debate against Mike Pence, or whoever Trump picks if he dumps Pence. But I think day-to-day she'll be strong. But at the end of the day I think these things are going to fall flat. The other thing about Kamala Harris is, if Joe Biden wins, he's going to have a herculean task in front of him to dig us out of this mess Trump has lead. And Kamala Harris has what it takes, she is tough, she’s experienced, she's run a huge department in the California Department of Justice. So yes, I think we’re going to see—they won't even hide it. It's going to be racial, misogynistic, trying to scare people, but at the end of the day they have not landed on an effective case against Biden. It’s getting very late.  People start voting in some battleground stating in four weeks, the clock’s ticking.  But if they want to turn this into a race against Kamala Harris, I think that's a race she would win, but I do not think that's not the path to beating Joe Biden.

VELSHI: You said something really interesting there, Aimee, I just want to go back to what David Plouffe said, if Trump decides not to dump Pence. There's stuff in the ether that suggests that the Trump campaign’s worried enough about the effect, the positive effect that Kamala Harris is going to have that they may be looking at options versus Pence. I don't know if they'll come to you, because you seem to sort of have a direct line to the best women in politics. But do you think it's possible that Donald Trump going to try to find somebody to go up against Kamala Harris?