Forget calling him a Hollywood director. Clint Eastwood is quickly earning the title of America’s director.

Eastwood, who has recently directed films depicting American heroes – from former Navy Seal Chris Kyle in the movie American Sniper, to Sully, on pilot Chelsey Sullenberger's flawless emergency landing of a jet in the Hudson River so everyone survived. Next, Eastwood will be directing a film on the August 21, 2015 incident in which three courageous American friends - Anthony Sadler, Alek Skarlatos, and Spencer Stone – . stopped an ISIS-inspired terror attack where a terrorist opened fire on a Paris train. 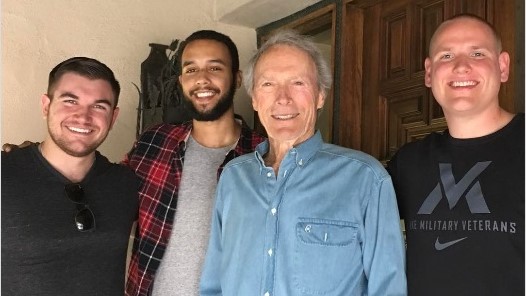 Skarlatos posted an Instagram photo with Sadler, Stone and Eastwood and captioned it:

“As some of you may have heard we have had the incredible good fortune to have the legendary filmmaker Clint Eastwood decide to make a movie about the train incident. I know we all loved his movies growing up and he is a personal hero of mine. We are incredibly honored to have this opportunity to have such talented people tell our story, and incredibly humbled because that day could've turned out so different. Thank you all. God is good.”

The movie is Eastwood’s third film with Warner Bros. and will be based on the book The 15:17 to Paris: True Story Of A Terrorist, A Train, And Three American Heroes.

In an interview with Breitbart last November, Sadler and Skarlatos discussed their book.  Sadler told Breitbart:

The narrative is often, "Oh, yeah, the military is why these guys were able to do that," but I think the book portrays us as just the three regular friends, twenty-something friends that we were, and that we were just put in an extraordinary situation…The circumstances just kind of fell into place where we were able to act and not only save ourselves, but everybody else.

It’s just made me kind of, I guess, a little bit more worldly and appreciative of the United States because, I mean, honestly, Europe is going through a lot of issues right now, especially France, and I guess it’s just made me appreciate what I have here more because the rest of the world has it a lot rougher than we do, in a lot of ways.

Production for the movie begins later this year. Given the reception and awards Eastwood’s previous films have received, it’s probably safe to say this movie will be added to the list.