Streisand Proves Yet Again How She's a Hollywood Hypocrite

In a phone interview this past Monday on MSNBC’s Hardball, legendary actress, singer, and huge liberal Barbara Streisand decided to use her appearance to gush about fellow actress Meryl Streep’s criticism of President-elect Donald Trump at Sunday’s Golden Globes awards ceremony (plus lob a few insults at Trump herself).

Referring to Trump tweeting about Streep being “overrated” and a “flunky” for failed Democratic presidential candidate Hilary Clinton, Streisand questioned how “we” could take “four years of this.”

Actually, the answer is quite simple: It’s the same way conservatives slogged through eight years of President Obama.

I thought she said what she said beautifully. And It’s easy enough to see the video online of Trump mocking — you just showed it, actually — and I completely agree with Meryl. It was heartbreaking moment and so beneath the dignity of the presidency, let alone any respectful person. What we need more is kindness and common decency.

Matthews asked her about Trump and his “deviant” behavior:

What do you make of the critique that Meryl Streep made last night that you can push this thing and it becomes norm, that it`s like Daniel Patrick Moynihan, the Senator, once said, you define deviancy downward? This kind of behavior becomes the normal political conversation. 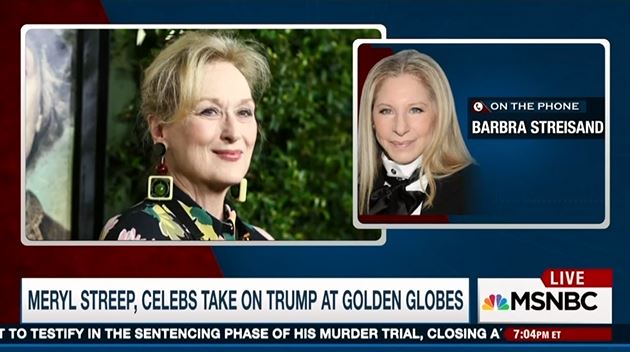 She agreed, opining that:

What’s the signal to little children who watch television and see this behavior of the soon to be president of the United States? Little girls were heartbroken when Hillary Clinton didn’t get to be president. So I think it’s what they see. Children will listen, I sang that in a song once, and you know they will see and they will learn. And you know I’m in the middle of having my teeth cleaned, Chris. You caught me at a disadvantage.

Matthews interjected how “it’s very important to mention that Donald Trump has in the very recent past said that Meryl Streep was one of his favorite actors in the country, and so certainly, his reaction was the usual rage.”

Streisand replied that it’s “why you can’t trust anything [Trump] says because if you get on his wrong side, he will blast you negatively.”

The MSNBC host concluded with the usual flattery:

Barbra Streisand, you`re so great. You're a friend of mine, and I'm so glad you came on the show tonight. This is big news. I take this as not just cultural news or pop culture news, but heavy political news tonight because I thought, as you did, that Meryl Streep said something a lot of people felt needed to be said, and as precisely as she said it.

I was very proud of her. She’s a wonderful actress and that he had to denigrate her talent because she spoke out. Why is he not sitting through briefings rather than tweeting this nonsense and rating wars with Arnold Schwarzenegger? I don’t know how we’re going to take four years of this.

Streisand also had the audacity to say that Trump shouldn’t have the need to “talk back” and insult anybody who doesn’t agree with him — calling it “pretty disgraceful.”

Tsk. Tsk.  What Streisand and her elitist liberal counterparts fail to recognize was that they are the ones who insult anyone who doesn’t agree with their progressive views, which is part of the reason Trump won the first place.

Once again, Streisand proves she’s nothing more than another left-wing Hollywood hypocrite telling people what to do or how to act, but only if they don’t agree with their views. Shocker.