'Modest,' Yet 'Vibrant': New York Times Gushes Over 'The Fashion of Islam' Exhibit

The same liberal media that tout women’s rights, gender equality, equal pay, the freedom for a woman to express herself by choosing how to dress, is the same media now pushing the narrative that "modest" Islamic fashion is the hottest style to hit the catwalks.

Yes.  For the moment, The New York Times has thrown their feminist beliefs out the window, opting to promote a fashion that is often viewed as oppressive to women because it forces them to cover their entire body and face for fear of receiving unwanted glances from anyone other than their husbands.

Times writer Jori Finkel’s article, “The Fashion of Islam’ to Arrive at de Young in 2018” gushes about the de Young Museum in San Francisco crossing a fashion barrier – going from gowns and glam from Oscar de la Renta and Jean Paul Gaultier –to the hijabs and headscarves worn by Muslim women.

The show, “The Fashion of Islam” is the first major show for the museum’s new director, Max Hollein, who says: 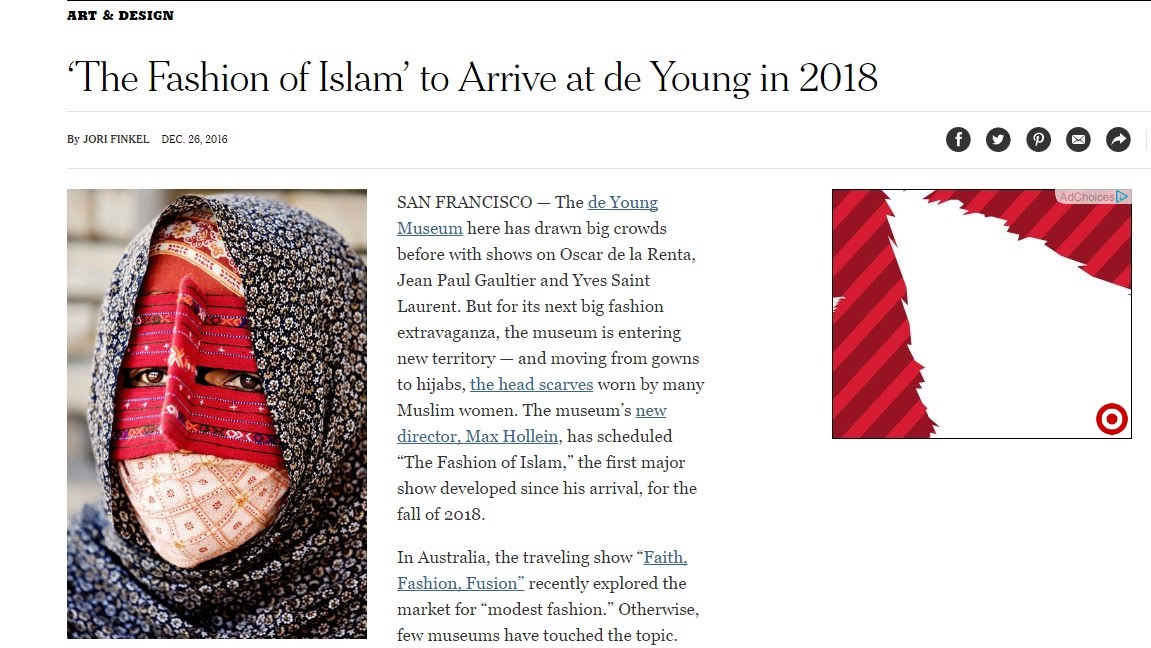 “There are probably people who don’t even think there is fashion in Islam...But if you look at Saudi Arabia, Dubai and Beirut, the fashion is really vibrant, and it can speak to larger political and social developments, cultural understanding and misunderstandings.”

Finkel's article even shows the photo of a woman’s covered face with the caption, “A fashion item from Iran, where many women in the southern part of the country are wearing different kinds of face and head coverings.” It sounds as if it’s the newest trend.

Finkel says Mr. Hollein’s idea is “…to approach the subject from different perspectives, examining how Islamic styles are shaped by seemingly polar opposites: religious beliefs, which seek to avoid any appearance of extravagance and arrogance, or calling attention to oneself, and global fashion trends.”

The museum will also display Islamic streetwear and sportswear, and address the burkini ban issues that put France in hot water over the summer, while another section of the museum will display more historical and traditional examples of Muslim dress.