Rachel Maddow Pessimistic for Media, Says It May 'Crumble' Under Trump 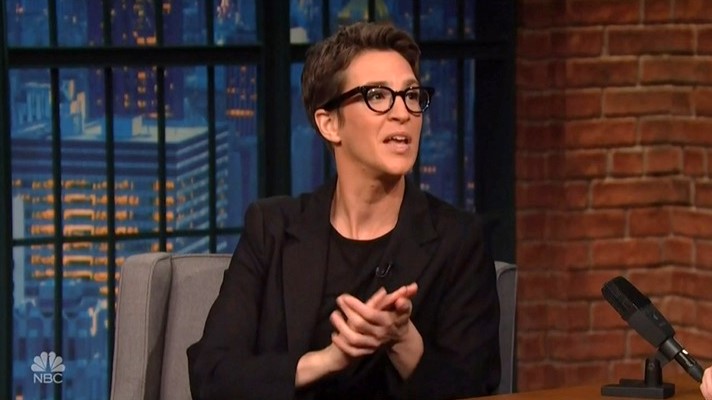 MSNBC’s Rachel Maddow made the rounds on a few shows last week where she expressed her worry that a Trump administration will have a serious and negative impact on the profession of “journalism” -- it may "crumble" -- and it “just got different” under the incoming administration.

Last week Maddow was on NBC's Late Night with host Seth Meyers, who asked her if liberals had any reasons to be optimistic about the new administration.  Maddow hesitated before responding:  “I have bright red shoes, which is very festive. … I have a family I love and nice dogs.”

She did express hope in having “enemies who are cartoonishly evil.” Clearly she isn’t a fan and believes that with the new administration.  She lamented:

Maddow also made the rounds on ESPN Radio’s The Dan LeBatard Show where she discussed a bleak future for journalism, telling LeBatard:

“I’m worried that, in an industry that is so weak, just in terms of its business model, with papers consolidating everywhere and the jobs just not not being there, the business is in a really bad position to defend itself if it comes under sustained attack…”

“Every president hates the media, and every smart politician plays itself against journalists and it’s fun to yell at us…But, I feel like the incoming presidential administration is really, really, really against the media, including the president-elect’s wife currently suing a blogger for $150 million. So, I’m worried that, if there is a real attack on the press, the press will just crumble because we are so weak as an institution. So, I think people fall for fake stuff all the time, and the solution to that is just to debunk stuff and tell better real stories. But I’m worried about like a real attack on the press.”

Of course Maddow didn’t explain that the future first lady’s $150 million lawsuit against a blogger was for a nasty and false story that implied Melania Trump had been part of an escort service in the past. That’s what a true journalist would do – give both sides of a story – including all background information, but you won’t find Maddow and other “reporters” doing that since they are not true journalists, rather, they are biased talking heads that somehow got lucky enough to be given a prime-time show. Maddow isn’t concerned about the decline of her “profession,” her biggest fear that a new administration is coming in and will finally make the media accountable for their lies and bias.