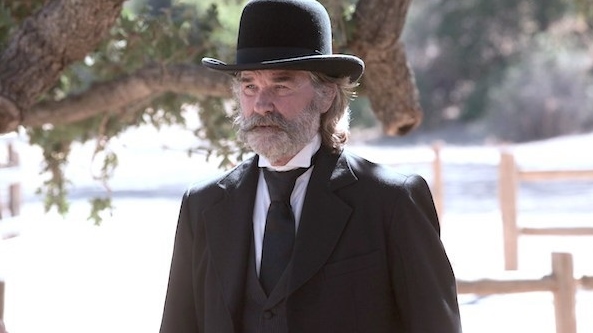 Kurt Russell has fought fires in the movie Backdraft, Chinese gangs in Big Trouble in Little China, American outlaws in Tombstone, crime bosses in Escape From New York and the Russian hockey team in Miracle. Now, he’s taking on the liberal media.

Russell was recently interviewed by Jeffrey Wells of the blog Hollywood Elsewhere about his upcoming filmThe Hateful Eight – directed by the very controversial Quentin Tarantino. Wells wasted no time trying to turn an entertainment piece into a political battle about gun control.

Asking whether or not Russell felt the “gun culture” in movies like Tarantino's were appropriate given the recent terrorist attacks of Paris and San Bernardino, and that guns were a metaphor that “disenfranchised white guys need” to feel good about themselves, Russell laid into Wells:

RUSSELL: I don’t understand concepts of conversation [about] the gun culture. We’ve lived with guns since, what, the 7th Century or something? I don’t know.

WELLS: Well, I think we all know…guns are a trope. Not a trope but a totem, a metaphor that disenfranchised white guys need…it makes them feel good about themselves.

RUSSELL: You can say what you want. I don’t agree with that. It’s not my thing.

For some odd reason, Wells inserted his theory about white male insecurity is “statistically irrefutable,” and Russell uncorked:

“If you think gun control is going to change the terrorists’ point of view, I think you’re, like, out of your mind. I think anybody [who says that] is. I think it’s absolutely insane. The problem, the problem that we’re having right now to turn it around…you may think you’ve got me worried about you’re gonna do? Dude, you’re about to find out what I’m gonna do, and that’s gonna worry you a lot more. And that’s what we need. That will change the concept of gun culture, as you call it, to something [like] reality. Which is, if I’m a hockey team and I’ve got some guy bearing down on me as a goaltender, I’m not concerned about what he’s gonna do — I’m gonna make him concerned about what I’m gonna do…”

Russell attempted to shift the conversation back to the movies, but Wells tried to stick to his “guns” by interjecting that Obama’s point that people on a no-fly list are on it for good reasons and could get still get a hold of guns easily. Russell shot back: “They can also make a bomb pretty easily. So what? They can also get knives and stab you. Whaddaya gonna do about that? They can also get cars and run you over. Whaddaya gonna do about that… Outlaw everything? That isn’t the answer.”