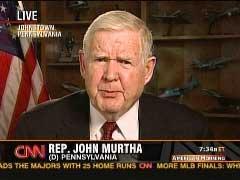 Newsbusters readers who had the misfortune of watching CNN May 30 were not experiencing deja vu. Democratic Congressman John Murtha was interviewed on not one, not two, but three separate network programs throughout the day. Murtha’s day of CNN appearances began with an interview conducted by American Morning's Soledad O'Brien, followed by a late afternoon exchange with Wolf Blitzer on The Situation Room. Anderson Cooper 360 viewers, not to be left out, were treated to a pre-taped interview between Cooper and Murtha during the 10pm hour.

While O’Brien and Blitzer were eager to hear Murtha equate the alleged shooting of Iraqi civilians by U.S. Marines in Haditha to the My Lai massacre in Vietnam, only Cooper questioned whether Murtha might be rushing to condemn the Marines before the official investigation is complete.

Cooper: "Congressman Murtha, you believe the military investigation will ultimately show that the, the troops in Haditha, quote, ‘overreacted because of the pressure on them and killed innocent civilians in cold blood.’ That’s a quote from you. How are you so sure at this point? The investigation isn’t even complete."

Cooper continued to press Murtha throughout the exchange, citing critics who believe that the congressman is playing politics with what is alleged to have occurred in Haditha:

Cooper: "There, there have been those who said you are politicizing this, you’re, you’re jumping to judgment, the investigation is still going on. A man by the name of Ilario Pantano, a Marine who was accused with two counts of premeditated murder, charges which were later dropped, he wrote a letter to The Washington Post, and he said this. Quote, ‘Not only is he,’ meaning you, Mr. Murtha, ‘certain of the Marines’ guilt, but he claims to know the cause, which he conveniently attributes to a policy he opposes. Let the courts decide if these Marines are guilty. They haven’t even been charged with a crime yet, so it is premature to presume their guilt, unless that presumption is tied to a political motive.’"

While Blitzer and O’Brien failed to question Murtha about his political motivations, they were both extremely interested in hearing him compare Haditha to the My Lai massacre:

From the May 30 American Morning:

O’Brien: "There are people who’ve said it’s–there’s a comparison here that can be made to, to My Lai. Do you think that’s true?"

Murtha: "Well, I think it’s just as bad, if not worse than that. And, and My Lai, if I remember the circumstances, you’re out in the field and, and, and they killed civilians, but they used the excuse that they looked like they were the enemy. Here there was no shots fired. There was no enemy action at all."

From The Situation Room, May 30:

Blitzer: "There are some who are already making comparisons between Haditha and My Lai in Vietnam, the massacre in which hundreds of Vietnamese civilians were killed, an incident that you well remember. Is that a fair comparison, a fair, a fair analogy?"

Murtha: "Well, I think it’s a fair analogy, except for the numbers. There was about 124, I think, in the My Lai incident, and then there was 24 here. But it’s the same thing..."