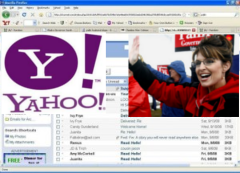 Thanks to the open-source Drupal software that we run at NewsBusters, we get great search engine placement. I hear from people all the time when they're searching for various topics we write frequently about here that NB often turns up at the top of the results.

In one of those strange coincidences of life, it turns out that because of NewsBusters' high search engine placement that we made a cameo appearance in the Sarah Palin email hacking story.

Our story begins with 4chan, a hugely popular bulletinboard where people can discuss numerous topics. 4chan members are highly interested in Japanese and computer geek cultures. They are also known for their strange and often bizarre taste and love of random acts of disruptive digital pranks.

The most popular 4chan board, called simply /b/, allows users to post on any random topic. Generally speaking, the motivation behind /b/ members is to post something that will get a lot of replies, no matter how outrageous.

Usually, such topics are fairly harmless (although not necessarily undisturbing) but one started on the 16th which was decidedly not so when a /b/ user, who later called him/herself "rubico" posted a screenshot of GOP vice presidential candidate Sarah Palin's Yahoo email account as well as her user name and password.

The attack required no sophistication or specialized computer cracking skills as "rubico" admitted in a subsequent posting to /b/ (deleted later but archived in its entirely here). In fact, it was surprisingly easy:

it took seriously 45 mins on wikipedia and google to find the info, Birthday? 15 seconds on wikipedia, zip code? well she had always been from wasilla, and it only has 2 zip codes (thanks online postal service!)

the second was somewhat harder, the question was “where did you meet your spouse?” did some research, and apparently she had eloped with mister palin after college, if youll look on some of the screenshits that I took and other fellow anon have so graciously put on photobucket you will see the google search for “palin eloped” or some such in one of the tabs.

I found out later though more research that they met at high school, so I did variations of that, high, high school, eventually hit on “Wasilla high” I promptly changed the password to popcorn and took a cold shower…

After the account was opened up, the info inside Palin's email account quickly spread around the web until another /b/ user took umbrage at what had happened and went and changed the password--and emailed a friend of Palin's afterward. This anonymous individual then took a computer screenshot of the email.

Before that time, several other screenshots of Palin's email box emerged. One, archived by the anti-secret Wikileaks, shows a /b/ user looking over the Yahoo inbox with...a NewsBusters story in another tab, a post from Tom Blumer talking about a particularly gross attack on Palin by Fox News's Alan Colmes.

What to make of this? Might it be possible that we know "rubico's" IP address and get his physical location?

That is what blogger College Politico seems to think. I'm not so sure. (Warning computerese ahead). Here's why:

In any case, it's an interesting little side note to see NB popping up in the most random of places now. We have the log files at our disposal should the feds come asking for more details. I'm not holding my breath for a request, however, based on the above reasons.

Wired has some additional details on this if you're interested.

Thanks to Allah for the tipoff. Kudos to College Politico for noticing the cameo.

Update 09-20 12:49. College Politico responds to my points. I'm in Las Vegas right now at some trade shows so time is a little scarce. I anticipate being able to respond to CP's points sometime this weekend though.