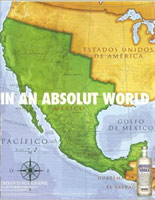 More news from the front of the Wiki Wars, the ideological battle for the soul of Wikipedia: it seems left-wingers at the online encyclopedia site are angry that anyone would want to mention Absolut's reconquista controversy in the vodka maker's article.

How do we know this? From reading the "Talk" page for the Wikipedia entry "Absolut Vodka," where people can discuss the article and changes they'd like to see made to it. Apparently liberals there do not want the public to know that the company got in big trouble win consumers after it ran an ad in Mexico portraying that country as having taken over certain parts of the United States.

The discussion starts off with an anonymous person (apparently from Loyola University judging by their IP address) who asks that the Absolut entry be partially blocked from editing to prevent "vandalism:"

"Could someone protect this page to new users? Apparently some non-notable bloggers have taken offense to their recent ad campaign and have repeatedly vandalized this page."

Those "non-notable bloggers," include Michelle Malkin, NewsBusters, Glenn Reynolds, and Jim Hoft, and about 3,000 other blogs, but nevermind. The discussion continues as some rational people begin to make their point:

WHY would you have to "protect" this page? IT seems top me that those that want to "protect this page" have a political agenda and that agenda is NOT the truth. It seems as if to me this page actually is endorsing the "reconquista" movement. If WIKI is going to survive, it needs to be on truth. This was a STUPID thing for ABSOLUT to do with 50% of their market share in the UNITED STATES. It serves a PERFECT business lesson of what not to do i.e., DO NOT ALIENATE YOUR PAYING CUSTOMERS" and then, expect the customers to by hook line and sinker a political agenda cleverly disquised as an "ad". This is about politics, NOT knowledge or documentation. A pox on your "scholarly" activities as a charade of political activism.

Considering the fact that Absolut has issued a statement on their website regarding the matter([2]), and it has been mentioned by the Los Angeles Times ([3]), I think it is a bit more than a few "non-notable" bloggers. I myself am rather incensed at the ad, and will go out of my way to not buy their product in the future. I've added a segment on the issue to the article.

The libs, of course, cannot allow such language to stand. And in keeping with their tradition of labeling left-leaning opinion as objective, they phrase their arguments in favor of censoring the story using neutral-sounding language. Here's lefty at IP 67.173.127.11:

It was in LA Time's blog, an opinion site, and the other source used was a blog as well. If there are some neutral points of view, like a newspaper article, a news story, etc, I would consider keeping it, but for right now, I'd keep my emotions in check about it.

Think that's bad? Wait till you see user "Orange Mike" describing Michelle Malkin, one of the early bloggers who followed the story:

I never called her "non-notable." I will call her extreme, radical, eccentric and other things; but she's certainly notable among her fanbase.

Notice the subtle spin "notable among her fanbase." While that's certainly true, it sure is a funny way of describing Malkin who actually is the number one conservative blogger in terms of traffic (adding her Hot Air and personal site together), a nationally syndicated columnist, and a regular on cable television.

All that aside, though, Absolut's controversy is eminently relevant to the vodka distributor's entry. From a marketing angle alone, this story is a fascinating example of the power of the blogosphere, viral emails, and bad multinational decision-making.

This story has a happy ending, though. Thanks to some sane people who made a difference, the Absolut Vodka entry now has language describing the controversy, a perfect example of how there's no need to cede dominance of the critically important resource of Wikipedia to the left.