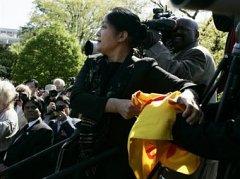 The authoritarian government of China is well-known for suppressing free speech and sometimes getting American media companies eager to cash in on a huge emerging market to help it do so. Yahoo, Microsoft, Google, Time Warner, Fox, and others have soiled their reputations assisting the communist regime's crack downs on dissent.

American media companies don't always back down. Sometimes, however, they're censored directly by the Chinese government itself. Such was the case today when a protestor apparently affiliated with the meditation group Falun Gong managed to get herself close to Chinese president Hu Jintao as he was visiting the White House.

As the woman's voice began shouting out before being arrested by Secret Service agents, Chinese television blacked the screen and muted the audio, according to Matt Drudge. After the event was over, when CNN International (the version of CNN seen outside the United States) began discussing the protestor, its signal was abuptly cut off to Chinese viewers, making some wonder what was going on.

CNN has since said that the blackout was done directly by the Chinese government. More later... Michelle Malkin has the video of the protestor as it was broadcast uncensored on American CNN. Reuters and AP have stories on the protestor.

UPDATE 14:38. Still waiting for a callback from a CNNi spokesperson. Added Fox to American media censors per commenter.

UPDATE 14:52. According to CNNi representative, the network's feed was disrupted only for Chinese viewers. Two incidents of censorship took place, during the demonstration and during the first post-speech discussion of the protest.

"From time to time the Chinese authorities do disrupt CNN's signal into mainland China," CNNi spokesman Nigel Pritchard tells NewsBusters. "It happens every so often."

Pritchard declined to say whether CNN protests such acts of censorship to government officials. "I'm not going to discuss my or CNN's coversations with the Chinese government," he said. The network does not make public protests against such censorship, according to Pritchard.

UPDATE: 04-21 12:28. Michelle Malkin has a good roundup of news about the protester, whose name is Wenyi Wang.