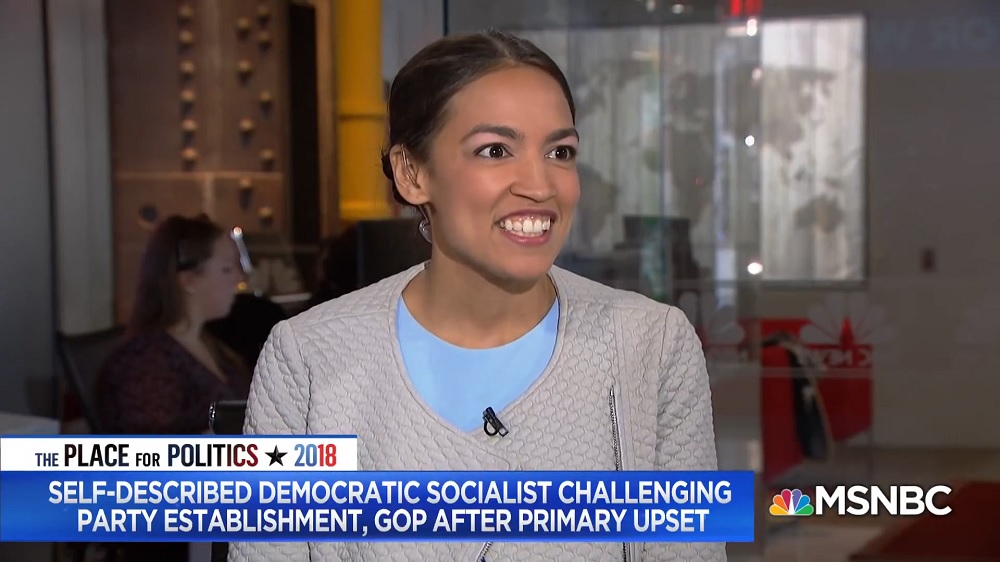 On Thursday, CNN.com's Hunter Schwarz spotlighted the recent victory of Democrat Alexandria Ocasio-Cortez, and underlined that the left-wing congressional candidate's electoral win could be a sign that future millennial politicians "might include Democratic socialism" in their platforms. Schwarz pointed out that "for many cash-strapped millennials in debt, Democratic socialism isn't radical, it's a way to fix a system they believe failed them." The journalist also cited a two-year-old poll that found that "Millennials are OK with socialism."

Schwarz led his online article, "Millennials are much more open to socialism," by outlining that "Millennials are just starting to be elected to Congress, but they could one day make up the largest generational group there, bringing a distinctly millennial approach to policy and governing. And that might include Democratic socialism." His "case in point" was Ocasio-Cortez's Tuesday victory in New York City. The correspondent reported that the "28-year-old Democratic socialist...won her primary...in an upset over a 10-term incumbent."

The CNN Politics journalist continued with his citation of the dated poll results: "More than any other generation before them, millennials are OK with socialism. A 2016 Gallup poll found 55% of those then aged 18-29 said they had a positive view of it (it's worth noting 57% supported capitalism and 78% supported free enterprise)." He also noted that "Bernie Sanders' presidential campaign was instrumental in mainstreaming Democratic socialism."

Schwarz then shifted to emphasizing the factor of economics for the millennial generation. He highlighted that "at a time of growing economic inequality, millennials are especially falling behind. A recent study by the Federal Reserve Bank of St. Louis found millennials born in the '80s have a net worth 34% below what was expected." After briefly touching on the high level of student loan debt and the "decline in home ownership among young people," the correspondent dropped his line about Democratic socialism supposedly not being "radical."

The CNN reporter returned to Ocasio-Cortez's victory near the end of his write-up. He noted that the socialist candidate stated that "her race was about 'people vs. money' in a campaign ad, positioning herself as an outsider determined to fix a broken system that favors the monied and privileged." He concluded that the politician's left-wing message is "one we could hear more frequently as more millennial candidates run for office."

CNN isn't the only media outlet that is touting Ocasio-Cortez and her socialist platform. The Daily Beast published a Thursday article on the "major boost in membership" of the Democratic Socialists of America. The online magazine noted that "the 28-year-old member of Democratic Socialists of America...shockingly won in New York's 14th congressional district on a leftist platform of Medicare for All, abolishing ICE, and a federal jobs guarantee."

America, a magazine published by the Jesuit religious order of the Catholic Church (and known for its slant to the left), featured an online op-ed by the candidate on Wednesday. Ocasio-Cortez spoke of her apparent Catholic faith as she outlined the need for reform in the criminal justice system. However, it should be pointed out that the Church has long condemned socialism. The politician also dissents from Catholic social teaching with her support of abortion and birth control. The magazine didn't mention these details in their short bio of the Democrat.