AP Plays Up 'Misery' in Venezuela After Trump Imposes Sanctions 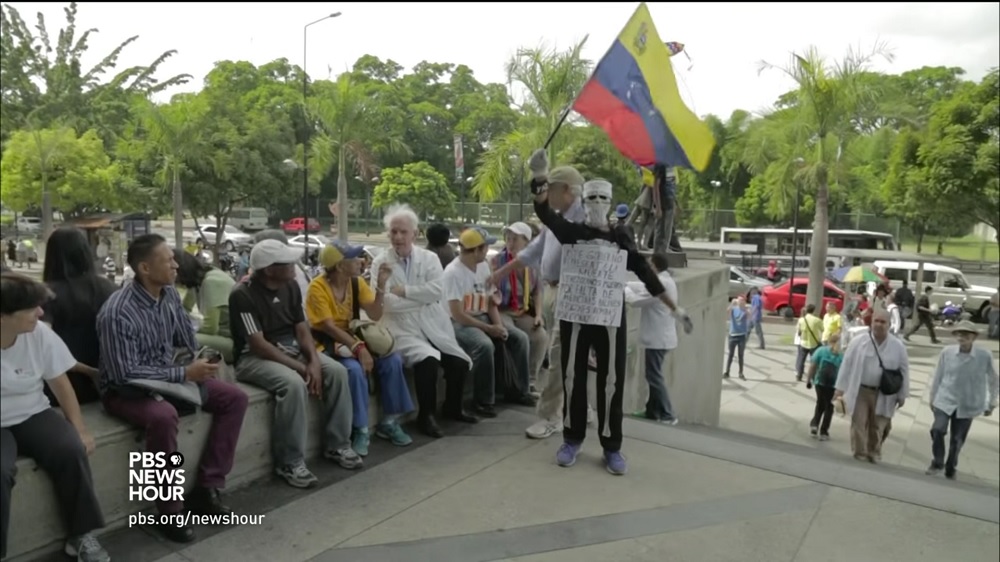 On Tuesday, Joshua Goodman of the Associated Press trumpeted that the economic "misery is likely to get even worse" in Venezuela due to new sanctions implemented by the Trump administration. Goodman acknowledged that the South American country is becoming "increasingly authoritarian," but didn't once describe the regime of President Nicolas Maduro as left-wing. He also cited an expert who asserted that possible additional sanctions might "throw Venezuela back to the stone ages."

Goodman led his report, "US sanctions to pile misery on moribund Venezuelan economy," by highlighting how a "small army of red-shirted workers mop the linoleum floors as their supervisors, sitting under a giant portrait of Hugo Chavez, look on. By the meltdown standards of Venezuela's economy, the shelves around the workers at the state-run Bicentenario supermarket in eastern Caracas are brimming with staples like rice and pasta." Despite the full inventory, the journalist noted that shoppers have been "scared off by prices that double every few weeks while wages in the crisis-wracked nation remain stagnant."

The AP correspondent continued by pointing out that "while President Nicolas Maduro celebrates having calmed Venezuela's streets after months of deadly protests, the country's imploding economy poses an ever more severe threat. And the misery is likely to get even worse due to financial sanctions imposed by the Trump administration in efforts to isolate Maduro for taking the country down an increasingly authoritarian path." He did highlight that "even before the sanctions were announced, most Venezuelans were struggling like never before. Since 2014, the year after Maduro took office, the economy has shrunk 35 percent — more than the U.S. did during the Great Depression."

Goodman then spent several paragraphs detailing how "galloping inflation has reached even the basic staples whose prices were long controlled by rigid price and currency restrictions." For example, the market in Caracas that he first zeroed in on "hasn’t seen any fish or meat in about a year, partly because the freezer section's cooling system broke and no spare parts can be found. Most shelves contain a single variety of any given product, much of it imported from China."

The journalist returned to the issue of the U.S. sanctions in the fifteenth paragraph of his article. He outlined that "the [Venezuelan] government accuses U.S. President Donald Trump and the opposition, which has backed the sanctions, of trying to oust Maduro through an 'economic war.'" The correspondent cited the former foreign minister, Delcy Rodriguez, who decried that the American "'financial blockade' means Venezuela won't be able to pay for essential imports like food and medicine."

Goodman did note that "the Trump administration denies it is seeking to punish ordinary Venezuelans." However, he also underlined that "by depriving Maduro of badly needed hard currency, the sanctions make it more likely that Venezuela will stop payment on its debt, or reduce what few goods it still imports at the official rates....Worse, if Maduro doesn't yield to Trump’s demand to disband the constitutional assembly and call elections, even tougher sanctions are likely to follow."

Near the end of the report, the AP correspondent detailed that "Maduro says he will look to increase commercial ties with China and Russia, although it's not clear how generous its allies will be, given Venezuela's growing reputation as an international outlaw in the mold of Cuba, Syria and North Korea." He closed with the dire quote from his economic expert: "'This could really reduce them to a barter economy and throw Venezuela back to the stone ages,' said Russ Dallen, a managing partner at investment bank Caracas Capital Markets. 'It's both fascinating and terrifying to watch.'"