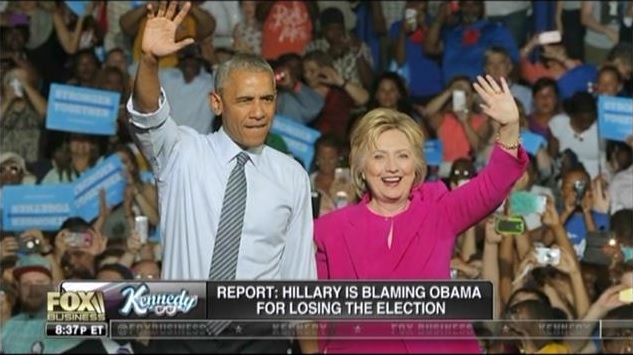 The broadcast networks morning and evening newscasts, along with the cable news networks, have largely ignored the Tuesday report from Axios's Mike Allen that Hillary Clinton's campaign team blames President Obama for her loss in the 2016 election. Charlie Rose mentioned the revelation in passing on Thursday's CBS This Morning: "You have reports, for example, that the Hillary campaign thought it began with President Obama not doing enough in terms of the Russian hacking." On Wednesday, Fox Business Network's Kennedy program devoted part of panel discussion segment to the Axios report [video below].

Allen first spotlighted in his article, "Team Hillary blames Obama more than Putin," that "the worst-kept secret inside Democratic circles is how bitter Hillary Clinton's team is at President Obama over her election loss. We have heard from numerous, anguished people in Clinton-land blaming Obama -- more than Putin, FBI Director James Comey or, um, Hillary herself -- for the defeat." The journalist explained that the "Clintonites feel that if Obama had come out early and forcefully with evidence of Russian interference in the campaign, and perhaps quicker sanctions, she might be president today."

The Axios founder also underlined that " how upset some Democrats are. It's testing relationships between Clinton and Obama loyalists. It's making efforts to form a new Trump opposition coalition harder." He quoted an unnamed Clinton campaign veteran: "The White House was like everyone else: They thought she'd win anyway....If he had done more, it might have lessened a lot of aggrieved feelings, although I don't think it would have altered the outcome."

On CBS This Morning, Rose turned to Bloomberg's John Heilemann for his reaction to the report (though he didn't specifically mention Axios). Heilemann indicated that he believed the reporting:

CHARLIE ROSE: Here, you have reports, for example, that the Hillary campaign thought it began with President Obama not doing enough, in terms of the Russian hacking.

JOHN HEILEMANN, BLOOMBERG POLITICS CO-MANAGING EDITOR: Well, I think that's really a retrospective thing, right? I mean, I think now they look back, and given that the race was won or lost — you know, in the last seven days or so — you look back and say, 'Well, my God, there are a million things that could have changed the outcome.' That's a really big thing that might have changed the outcome. Obviously, they also think if James Comey hasn't done what he did, she might have won.

The previous evening, FBN host Kennedy (of MTV fame) raised the issue with TownHall.com's Guy Benson, columnist Michael Malice, and Fox News contributor Eboni Williams. The panelists unanimously went after the Democratic presidential nominee and her campaign for laying the blame everywhere but with Mrs. Clinton herself:

KENNEDY: Clinton supporters [are] still reeling from Trump's upset victory — most of all, Hillary Clinton herself. And the person she blames the most — it's not James Comey; it's not Vladimir Putin; hey, it's not even me! This time, it's former President Barack Obama. According to a report on the news website Axois, Hillary Clinton thinks President Obama waited too long to present evidence of Russian interference in the election, among other things, and that cost her the white house. Is it possible someone else led to Hillary's loss — huh, like, maybe, Hillary?

The 'Party Panel' returns to discuss: Eboni Williams, Michael Malice, and Guy Benson. So President Obama deprived her of so much.

MICHAEL MALICE, OBSERVER COLUMNIST: You know, she's a strong, independent woman who has to blame every single man in her life for ruining — you know, her career.

KENNEDY: First thing I thought when I saw this: she's blaming another man.

MALICE: I've always called her America's nut mother-in-law, because she's such a scold, and she's such a nag. Everyone else is not doing what they're told, according to her orders—

KENNEDY: So, the President should have interceded on her behalf, clearly, when the Russians decided to install that rickety e-mail server in her house — because clearly, it was the Russians — because it was such a bad idea — and that's what tanked her credibility for, essentially, two years. But you don't hear anything about that. You don't hear anything about her personal decisions and how the e-mail drip, drip, drip actually provided more information than the DNC leak ever could.

EBONI WILLIAMS, FOX NEWS CONTRIBUTOR: And how about, no message on economy; no message on jobs — no message on anything except for Trump is a big, scary monster that will take us all to you know where in a handbasket.

So, I knew the second that she lost that this would be the first line of attack. It's no one else's fault but President Barack Obama — because she's still what? Bitter from 2008. No, seriously, I will go to my grave—

KENNEDY: They were bullied into taking her!

WILLIAMS: Yeah. She was forced down their throat.

BENSON: Absolutely. So she's blaming Obama — so, first of all — wow, racist. Second of all — that's the only explanation, right?—

BENSON: And the fact that she's sitting around doing un-ironic thanks Obama's in her living room is just a wonderful picture in my mind. And the fact of the matter is, he did go to the wall for her. He did everything he could to drag her sad, bloated political carcass across the finish line—

WILLIAMS: He actually — he guilted his base — into saying, if you don't vote for her, I will take it personally.

BENSON: My policies are on — are on the ballot — the whole thing at the convention — he did everything he could—

KENNEDY (off-camera): His wife ran as her most-effective surrogate—

WILLIAMS: She sure did, and she hates her—

BENSON: Yes! So, like, if it is true — his is almost too good to check this story. And so, I'm just going to enjoy it on its face, and renew my call for Secretary Clinton to run again in 2020. It's what the country needs and deserves. (Williams laughs)

KENNEDY: (laughs) We certainly do!