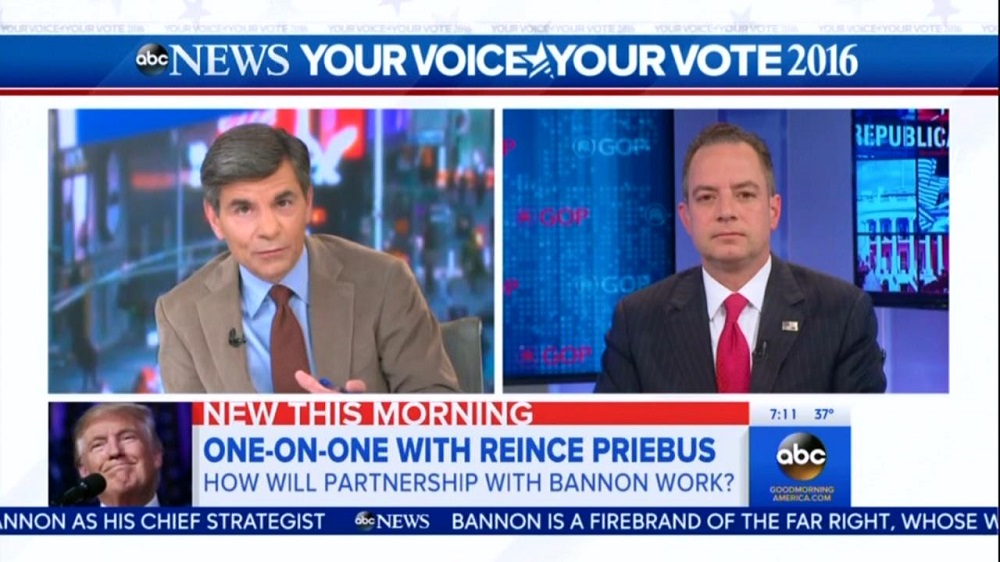 On Monday, ABC's GMA and NBC's Today pressed Reince Priebus over his future role as chief of staff to Donald Trump. NBC's Matt Lauer hyped that "to some, you're an odd choice for chief of staff, because they've...heard Donald Trump say....we're going counter to the establishment. You are the establishment. You're the ultimate insider." Both newscasts also hounded Priebus over Trump's pick of Steve Bannon as chief strategist. ABC's George Stephanopoulos touted how  "a top aide to...Harry Reid saying this 'signals that white supremacists will be represented at the highest levels of the Trump White House.'" [video below]

Stephanopoulos spent nearly all of his interview of the outgoing RNC chairman on the controversy surrounding Bannon. The former Clinton administration insider first asked, "What are the three most important things you want to accomplish in the White House in the first hundred days?" After Priebus named foreign policy, immigration, and ObamaCare, Stephanopoulos devoted three questions to the Breitbart chairman:

GEORGE STEPHANOPOULOS: There has been some reaction, though, to the pick of Steve Bannon as the chief strategist inside the White House. I have a couple of questions about that. In the press release yesterday, it said you were going to be equal partners with Mr. Bannon. How exactly is that going to work? Who's in charge?

REINCE PRIEBUS, RNC CHAIRMAN: Yeah, but George — look, can I just — can I say something about that? Look, unfortunately or fortunately, this is not a — this is an election that takes place in about twelve states. If Donald Trump wanted to spend three day — you know, three months in California, New York, and — he would have won the popular vote. So, he played the exact strategy that a smart person would play in the twelve states that mattered, and he won significantly. So, I get the obsession over the popular vote, but that's really not what this election was all about.

STEPHANOPOULOS: No question he won the presidency fair and square — I was just pointing out that fact. But let me ask that question about Mr. Bannon: as you know, there's been a strong reaction. The Anti-Defamation League says he is hostile to core American values. You have the top — a top aide to Senate Democratic leader Harry Reid saying this 'signals that white supremacists will — will be represented at the highest levels of the Trump White House.' How do you respond to that?

PRIEBUS: Well, look — first of all, I don't know where they're coming from. That's not — that's not the Steve Bannon that I know. I have sat with him for months. I have never, ever, one time experienced that. And I think these people are taking it way too far—

STEPHANOPOULOS: Well, they're looking at the Breitbart website, I think.

The ABC anchor ended the segment by spotlighting how "Wall Street Journal is reporting this morning that Mr. Trump and his staff seemed surprised by the scope of the job when they went and visited President Obama at the White House; and that President Obama plans to spend more time with him than presidents typically do, because he thinks Trump needs more guidance." He wondered, "Did you see that, and...does Mr. Trump want that kind of additional counsel from President Obama?"

On Today, Lauer noted that as of the day after the election, Priebus "said...[he] hadn't talked to Trump about a position in his administration...so this came together rather quickly." He asked, "Did you have any reservations about accepting this position?" The RNC chairman replied, "No — none at all," and emphasized that "it has worked, and it has been a great partnership" with President-Elect Trump and Bannon. The NBC journalist followed up with his "odd choice" and "ultimate insider" terms about Priebus.

MATT LAUER: Mr. Priebus, to some, you're an odd choice for chief of staff, because they've been watching this campaign over the last year — or year and a half. They've heard Donald Trump say, we want to bring change to Washington. We want to drain the swamp. We're going counter to the establishment. You are the establishment. You're the ultimate insider and deal-maker. Why are you the right fit for this job?

Co-anchor Savannah Guthrie then raised the Bannon controversy. Priebus tried to give a response, but she cut him mid-answer:

SAVANNAH GUTHRIE: Can we talk about Steve Bannon? In some ways, he's the flip side of the coin here — okay? (Priebus laughs) And a lot of people are concerned because they look at the website he ran, Breitbart News — as one paper put it, it recently accused President Obama of — quote, 'importing more hating Muslims;' called Bill Kristol a 'renegade Jew;' advised female victims of online harassment to just log off and stop screwing up the Internet for men. I guess people are wondering, is this the worldview that Steve Bannon will bring to the White House? Can you let them know anything about him that would be contrary to the website he ran?

REINCE PRIEBUS, TRUMP WHITE HOUSE CHIEF OF STAFF: Sure, and — and that wasn't his writing. I mean, that was — that was some articles on Breitbart. It wasn't him. Let me just tell you about him, as I know him. The guy I know—

GUTHRIE: Okay, but he's the — he was the head of it. The buck stops with him, right?

PRIEBUS: The guy I know is a guy that isn't any of those things. I mean, the guy I know was a guy sitting in an office all day yesterday talking about hiring; talking about — and in the last few months, was a guy that exhibited none of those qualities. Here's a guy who was — Harvard business school; he was a ten-year naval officer; London School of Economics, I believe. He has — he is a guy who is pretty — he's very, very smart; very temperate. And together, we've been able to manage a lot of the decision-making in regard to the campaign, along with Kellyanne [Conway], and it's worked very, very well.

Lauer came back with one final question before ending the interview: "Well, let me just follow it this way: in the West Wing, will you or Steven Bannon have more power or influence in shaping Donald Trump's agenda and policies?" The Republican guest underlined that they were different roles.