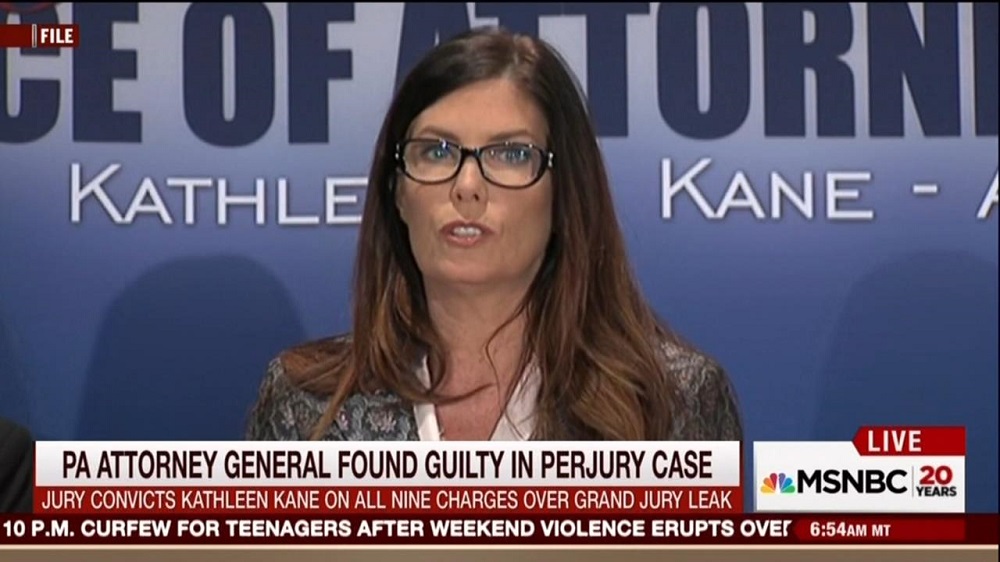 On Tuesday, ABC, CBS, and NBC's morning newscasts, along with CNN's New Day, all failed to cover a jury convicting Pennsylvania's Democratic attorney general, Kathleen Kane, on two felony charges of perjury and seven other criminal counts. MSNBC covered the breaking news of the verdict on The Rachel Maddow Show on Monday, and on Tuesday's Morning Joe. [video below] Fox News Channel gave news briefs on Kane's conviction on Tuesday's Fox and Friends.

NBC News's website posted the Associated Press's write-up on the state attorney general early on Tuesday morning. However, Today was too busy covering the Summer Olympics in Rio to notice the Democrat's criminal conviction:

Kathleen Kane showed little emotion as the jury convicted her late Monday of all nine counts, including two felony perjury counts....In an episode that seemed more likely at a mob trial than a statehouse corruption case, Kane's political operative described being taken to a parking garage, stripped of his phone, keys and wallet and searched for a recording device before a lunch meeting with the attorney general....

Kane, a first-term Democrat who had never held elected office, enjoyed a brief honeymoon period in 2013 before her agency descended into chaos as she feuded with officials inside and outside the department.

When she suspected a former office prosecutor had leaked a critical news article about her shutting down a statehouse probe, she decided to leak word that he had shut down an investigation into an NAACP official in 2009, the jury found....

Perjury, the only felony charged, can bring up to seven years in prison. The misdemeanor charges include conspiracy, official oppression and false swearing.

Correspondent Kasie Hunt gave the minute and eight-second report on Kane near the end of Morning Joe:

KASIE HUNT: Yeah. You may remember this. I'm going to go with 'pornographic' on many of these e-mails. Kathleen Kane, the attorney general of Pennsylvania, found guilty last night on nine counts — including perjury and criminal conspiracy. Prosecutors argued that Kane leaked documents to the media to discredit a former state prosecutor; and then, lied to cover it up. Her defense attorney said she plans to appeal her conviction, and that she was wrongfully accused. Kane, who was the first woman and first Democrat elected as Pennsylvania's attorney general, faces up to seven years in prison.

Her trial saw a number of bizarre incidents — including her decision to release hundreds of sexually explicit and racist e-mails sent between Pennsylvania public officials on government accounts — don't read them with your kids.

There was also this moment last August: Kane's sister, who was dressed in the black — you can see there — walked in front of the actual attorney general, who came into court wearing a red dress to fake out photographers.