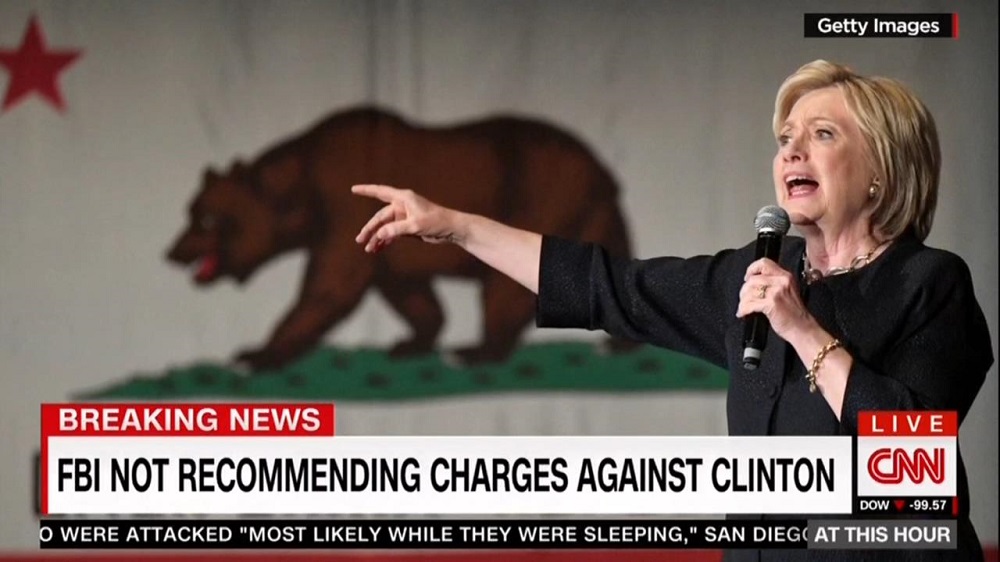 Stephen Braun and Jack Gillum touted how "key assertions by Hillary Clinton in defense of her email practices have collapsed under FBI scrutiny" in a Tuesday "fact check" for the Associated Press (an updated version of their article appeared on the AP's "Big Story" site early on Wednesday morning). Braun and Gillum examined several of Mrs. Clinton's key contentions in recent months regarding her e-mail scandal, and detailed the facts contrary to each of her statements. The two also pointed out that despite the FBI not recommending criminal charges, the federal investigation "left much of her [Clinton's] account in tatters and may have aggravated questions of trust swirling around her...candidacy."

The correspondents first outlined in their item, "Clinton email claims collapse under FBI probe," that "the agency's yearlong investigation found that she did not, as she claimed, turn over all her work-related messages for release. It found that her private email server did carry classified emails, also contrary to her past statements. And it made clear that Clinton used many devices to send and receive email despite her statements that she set up her email system so that she only needed to carry one." They added that the FBI's move "spared her from prosecution and a devastating political predicament," and continued with their "in tatters" phrase about the former secretary of state.

Braun and Gillum spent the rest of their article on the seven quotes from Mrs. Clinton herself or from her campaign website. Five out of the seven came from the former New York senator's initial press conference on the issue in March 2015. During that event, Clinton asserted, "I did not email any classified material to anyone on my email. There is no classified material." The pair countered that "actually, the FBI identified at least 113 emails that passed through Clinton's server and contained materials that were classified at the time they were sent."

The AP journalists also noted that at the same presser, Hillary Clinton claimed that she "responded right away [to the State Department] and provided all my emails that could possibly be work related." In reality, FBI Director James Comey disclosed that "when his forensic team examined Clinton's server it found there were 'several thousand work-related emails that were not in the group of 30,000' that had been returned by Clinton."

Just days before Director Comey's press conference, the former Obama Cabinet secretary boasted that she "never received nor sent any material that was marked classified." Braun and Gillum pointed out that Mrs. Clinton's "private system did, in fact, handle emails that bore markings indicating they contained classified information, Comey said." They also quoted the FBI leader's rebuke of the Democratic presidential candidate: "Even if information is not marked classified in an email, participants who know, or should know, that the subject matter is classified are still obligated to protect it."

On Tuesday, CNN political director David Chalian did a similar short fact check on At This Hour, where he focused on two of Mrs. Clinton's claims on the e-mail controversy. However, Chalian also trumpeted how the Comey's announcement was "a huge burden lifted off of Hillary Clinton's back...Now, she can begin to look forward to November without this hanging over her head — though it will remain this political problem with her previous words."