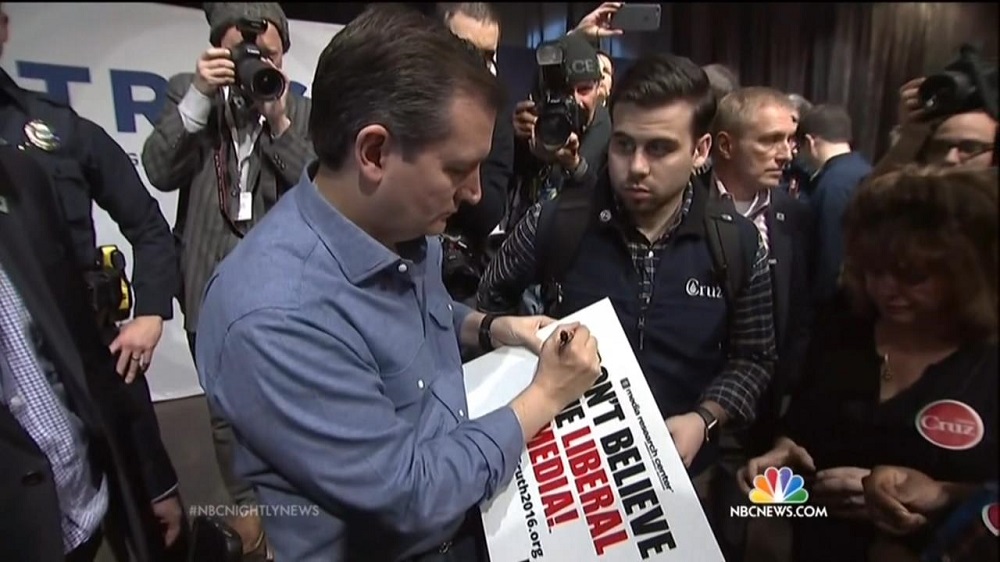 John Lloyd spotlighted how Ted Cruz has picked a fight with the media in a Thursday item for Reuters: "Most Republican contenders take a swing at the media, but Cruz swings more than others." Lloyd pointed out how after his victory in Iowa, Cruz "did not forget to say that it was the American people, not the media, who had chosen him. A supporter emphasized the point by waving a placard in front of the camera, urging viewers — 'Don't believe the liberal media.'" This sign is actually part of a Media Research Center campaign targeting the media's liberal slant.

The title of the Financial Times contributing editor's commentary put "liberal media" in quotation marks: "The 'liberal media' vs. Ted Cruz, Donald Trump, et al." After noting the presence of the MRC sign at the Cruz rally, Lloyd noted that the Texas senator "took time out in the third Republican debate in late October to blame the moderators – all media members – for trying to promote a 'cage match' of abuse among the candidates."

Lloyd, who co-founded the Reuters Institute for the Study of Journalism at Oxford University, also pointed out Cruz's counter-attack against another attack from the media in December 2015: "When...the Washington Post published a cartoon showing him using his family as 'political props,' he did a cartoon of his own. It shows Hillary Clinton, toss-of-a-coin winner for the Democrats in Iowa this week, walking two dogs, labeled 'Washington Post' and 'New York Times.' No surprise that he was mad at both these pillars of the East Coast establishment." However, he failed to mention the controversial nature of the Washington Post cartoon, as it portrayed Cruz's daughters as monkeys.

The writer soon asserted that "it is reverse flattery for the liberal media to be so vividly disliked by conservatives: it's a pleasure not confined to the United States." Lloyd then outlined how "the insurgent populists of Europe – Marine Le Pen of the Front National in France, Geert Wilders of the Freedom Party in the Netherlands, Per Jimmie Åkesson of the Swedish Democrats, Matteo Salvini of the Lega Nord in Italy, and others – all inveigh ritually against the liberals and leftists in journalism, and have few friends in the liberal media (or any mainstream media)." He added, "Yet most are presently at or near the top of the polls. For all of them, press enmity is a boon, not a curse."

Even after comparing Cruz and the GOP presidential candidates to these European politicians (whom the media often label "far right"), Lloyd did disclose that "Europe has a more statist tradition, and Marine Le Pen, who talks of 'the dictatorship of the markets,' can often sound more like democratic socialist Bernie Sanders than Trump or Cruz."

The Financial Times editor later gave his analysis/admission regarding the media's leftward slant:

The media, as a whole, would seem to believe in secular-rational values: a style of government that taxes the rich more than the poor, ensures that the latter have a variety of safety nets which give them a minimally decent life, restrains the excesses of corporate power and seeks compromises with other nation states, even where there is enmity between them. To much of that, the liberal-conservative media can usually agree, even as they are split on just how generous to be with handouts and how lax to be with corporate governance.

Lloyd also critiqued Donald Trump's campaign near the end of his article:

When Trump speaks, he often makes little sense and many of his proposals are ludicrous. But he projects a mixture of aggression to the elites and the media, a seductive belief that all woes can be solved by decisive, even brutal action and gives a performance, honed on his long-running TV show, "The Apprentice," where he frames himself as dominant, decisive – and right. He has reduced politics to the status of a TV show, and the Republican reality TV watchers have loved it.