CNN, ABC, and CBS's morning newscasts on Tuesday all touted the Philadelphia Daily News's thinly-veiled comparison of Donald Trump to Adolf Hitler on their front page. On Good Morning America, George Stephanopoulos pointed out to Trump himself that the headline "says, 'The New Furor Over Donald Trump,' showing you raising your hand in a pretty demonstrative gesture." On New Day, CNN's Chris Cuomo held a picture of the front page on-camera: "You wound up on the Philadelphia Inquirer (sic) front page like Hitler! They got you in a personage of Hitler right now!" [videos of Stephanopoulos and Cuomo below]

Stephanopoulos brought up the Philadelphia tabloid's attack midway through his interview of the billionaire presidential candidate, which began just after the top of the 7 am Eastern hour. Trump replied by citing FDR's treatment of Japanese-Americans during World War II: 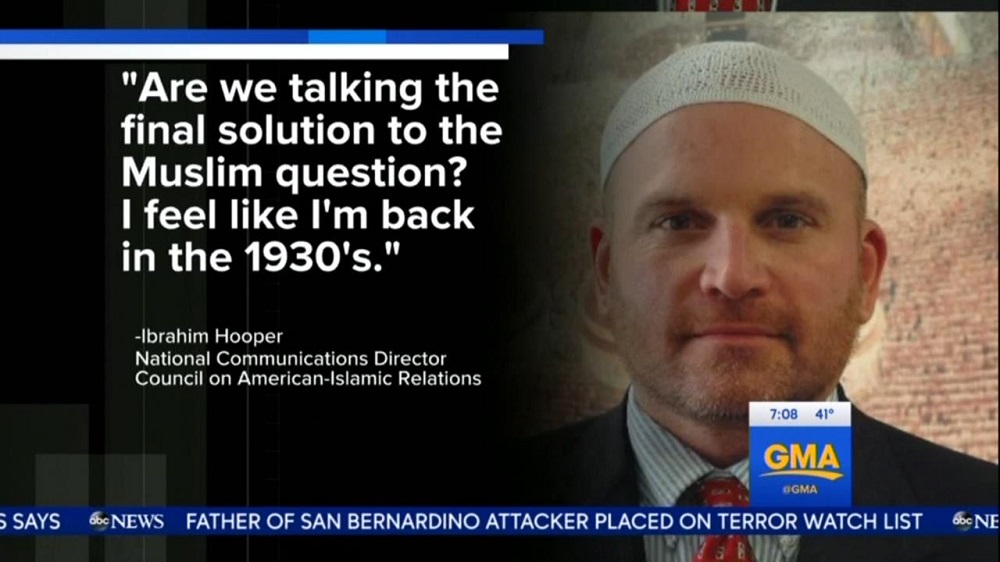 GEORGE STEPHANOPOULOS: Well, the question is, how would they figure out what was going on; and how would you know that people are Muslims that are coming into the country? And it's not on any passport in the world. And you say you have a lot of support — cover of The Philadelphia Daily News right now — I want to show it to our viewers right now. It says, 'The New Furor Over Donald Trump,' showing you raising your hand in a pretty demonstrative gesture. And we have from Ibrahim Hooper on the Council on American-Islamic Relations, saying, 'Are we talking internment camps? Are we talking the final solution to the Muslim question? I feel like I'm back I the '30s.' You're increasingly being compared to Hitler. Does that give you pause at all? 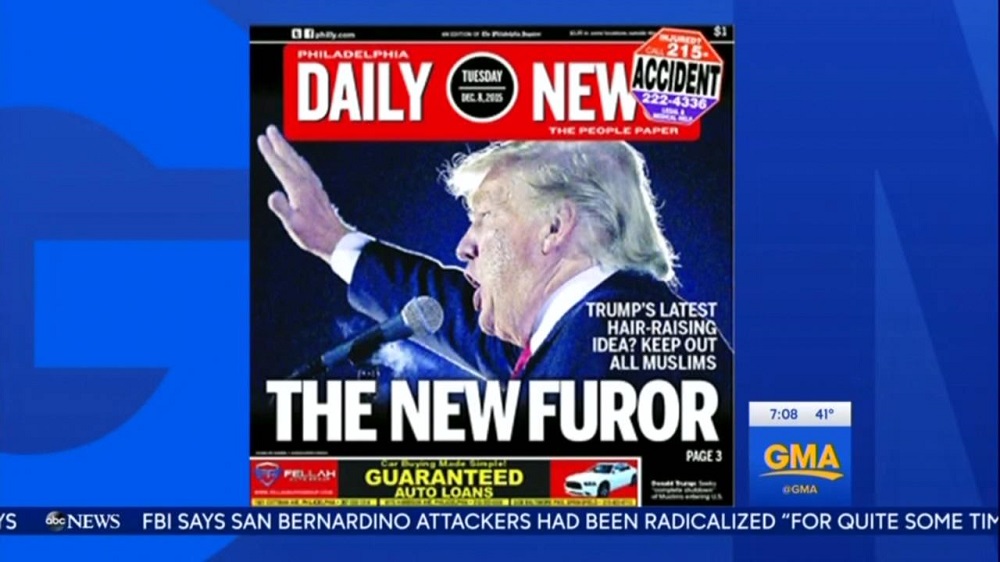 DONALD TRUMP, (R), PRESIDENTIAL CANDIDATE: No, because what I'm doing is no different than what FDR. FDR's solution for German, Italian, Japanese, you know, many years—

STEPHANOPOULOS: So, you're for internment camps?

TRUMP: This is a president highly respected by all. He did the same thing. If you look at what he was doing, it was far worse. I mean, he was talking about the Germans because we're at war. We are now at war. We have a President that doesn't want to say that, but we are now at war.

STEPHANOPOULOS: I've got to press you on that, sir. So, you're praising FDR there. I take it you're praising the setting up of internment camps for Japanese during World War II.

TRUMP: No, I'm not. No, I'm not. No, I'm not. Take a look at presidential proclamations 2525, 2526 and 2527 — having to do with alien German, alien Italian, alien Japanese, and what they did. You know, they stripped them of their naturalization proceedings. They went through a whole list of things. They couldn't go five miles from their homes. They weren't allowed to use radios, flashlights. I mean 1 you know, take a look at what FDR did many years ago, and he's one of the most highly respected presidents by — I mean, respected by most people. They named highways after him.

STEPHANOPOULOS: You want to bring back policies like that?

Minutes later, Cuomo interviewed Trump on CNN, and led the segment by citing Democratic presidential candidate Martin O'Malley's blast at the reality TV star on Twitter (though he didn't use O'Malley's name):

CHRIS CUOMO (to Trump): Your proposition is plain: ban all Muslims until we can figure out what's going on. People are asking you, how you would do that? I say, let's put that to the side. It's irrelevant. It's about the concept. You have leaders from your own party — in the key states of Iowa, New Hampshire, South Carolina — you have galvanized political rivals, all saying this is un-American and extreme; and that it makes you a fascist. How do you respond?

TRUMP: Well, I totally disagree. You take a look — you take a look, Chris, at what's going on, and it is disgraceful. First of all — you know, people quickly forget World Trade Center one, World Trade Center number two. And you take a look at all of the things that are happening — having to do with the problems. Now, you have the problem in California, where — and miraculously, $28,000 just found in this guy's — just put into this guy's account — this horrible — you know, person; this killer; this maniac — into his account. I have no doubt that we have no choice but to do exactly what I said until our country's representatives can figure out what the hell is going on, because we have a problem in this country.

CUOMO: ...Look, everybody knows who we're at war with—

CUOMO: But you're saying—

TRUMP: They want the jihad, and we— 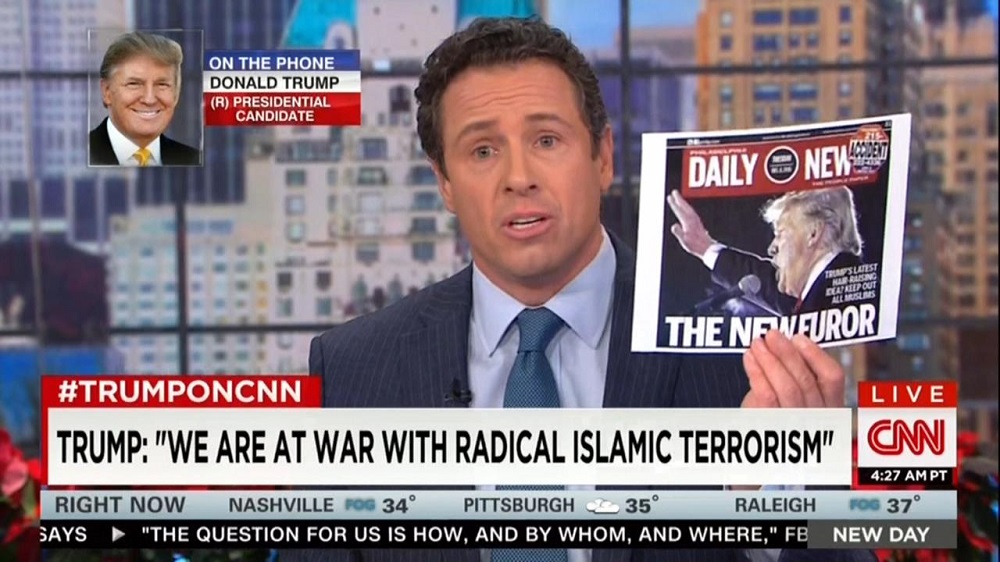 CUOMO: Well, you can't just throw out notions without any kind of checking of them. You know, this is what got you — wound up on the Philadelphia Inquirer (sic) front page like Hitler! They got you in a — in a personage of Hitler right now — a characterization of that—

TRUMP: Philadelphia Inquirer: another — another newspaper going out of business—

CUOMO: Well, I know — you're going to disparage whoever criticizes you, and I'm — I'm waiting for that as well.

Cuomo and his guest also had an exchange over FDR's controversial policies targeting American citizens of Japanese descent:

TRUMP: Now, if you look at FDR — because I watched Jeffrey Lord this morning — and I thought he was fantastic, by the way. If you look at him — the presidential proclamations 2525, 2526, and 2527, it was very — that was very, very stringent — very, very stringent. And I thought Jeffrey Lord did a fantastic job explaining it this morning on your show.

CUOMO: Okay. Here's my question to you: I heard Jeffrey Lord. We're always happy to have him on the show. He makes your case well — no question about that—

TRUMP: Well, he makes his own case well, in all fairness. It wasn't my case—

TRUMP: To be honest with you, what Franklin Delano Roosevelt did was worse.

CUOMO: Here's the distinction: one, the United States was at war, and he was targeting sovereigns he was at war against—

TRUMP: Excuse me: you don't think that we're at war?

CUOMO: And it is wrong now.

We are at war, but not with all Islam—

TRUMP: We are at war, Chris — get it through your head. We're at war—

CUOMO: But when you say — you're making it worse. When you—

CUOMO: That's fine criticism. You can criticize him. The reason that he won't say 'Islamic terrorism'—

CUOMO: The reason he says it—

TRUMP: We are at war. Put it through your head. 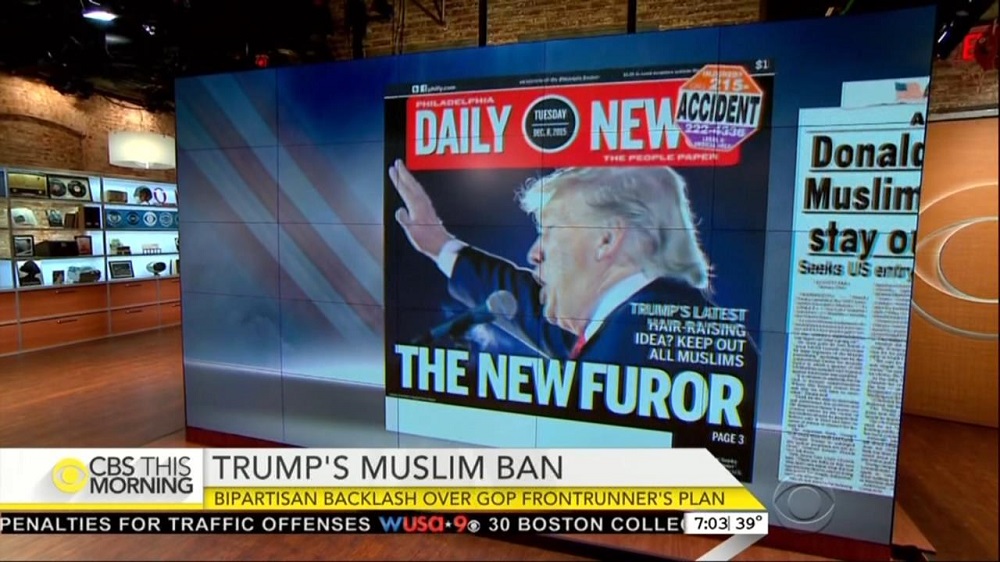 CBS This Morning didn't mention the Philly publication's front page explicitly, but they did show a screen cap of it just after the top of 7 am Eastern hour. An hour later, they also played a clip of CAIR's president likening Trump's proposal to the Nazis' early persecution of the Jews:

GAYLE KING: The executive director of the Council on American-Islamic Relations says Trump sounds more like the leader of a lynch mob.

NIHAD AWAD, CAIR EXECUTIVE DIRECTOR (from press conference): His ideas are not just unconstitutional; they are un-American. This rhetoric echos the policies enacted by Nazi Germany against the Jews. Have we learned anything from history, Mr. Trump?

It should be pointed out that hours before Trump made his controversial proposal, one of his rivals, Rand Paul, made a similar proposal on Monday's New Day on CNN during an interview with anchor Alisyn Camerota (who, like Cuomo, conducted a confrontational interview of the presidential candidate): "I think we have to push pause, and have a moratorium on new immigration from the Middle East, because I think that is a great danger to us. And [President Obama] making this about gun control, I think, mistakes the real danger, and that is people coming here to attack us."