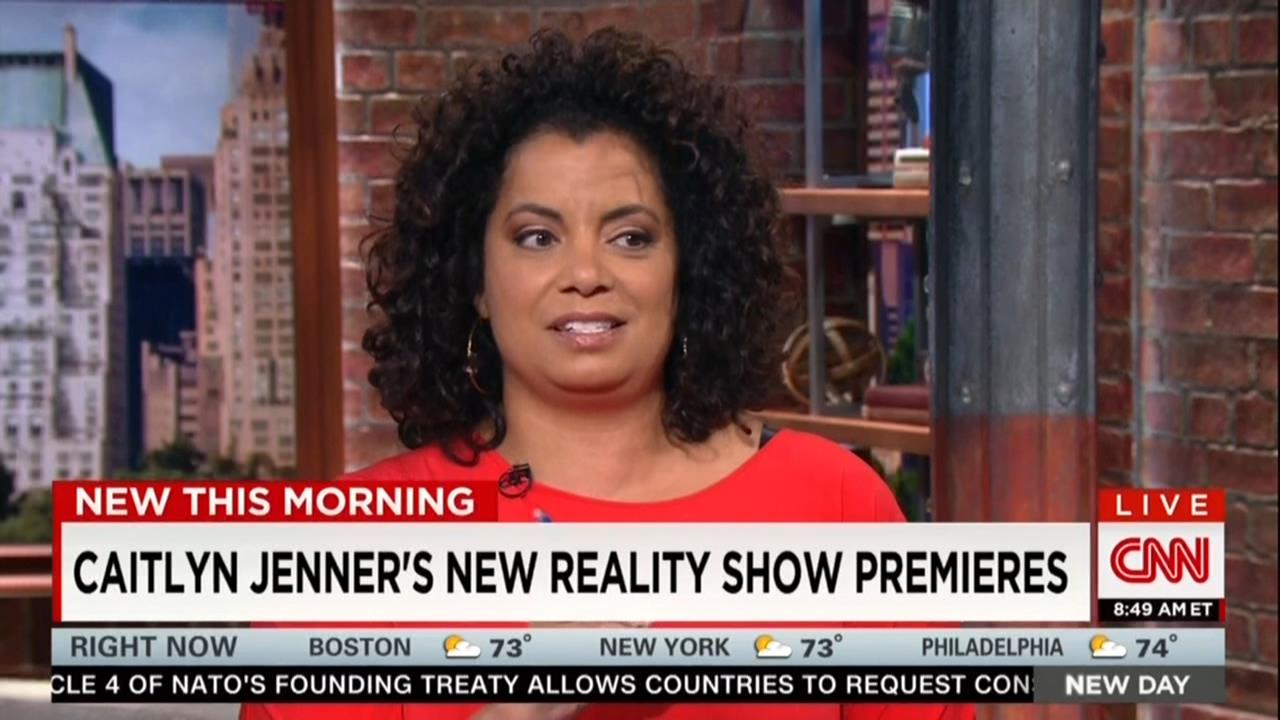 On Monday's New Day, CNN's Michaela Pereira touted the "very moving" and "very touching" parts of the debut episode of Bruce "Caitlyn" Jenner's new reality TV series, I Am Cait. Both of Pereira's guests – a former People magazine editor and a "transgendered" actor – gushed over the "exciting" and "very effective" debut. The anchor later wondered if the series is "going to be catalyst for change in conversation and narrative in America." [video below]

Pereira teased the segment with Larry Hackett and Joslyn DeFreece by spotlighting the "groundbreaking TV – critics are calling it 'brave, candid, raw.' Caitlyn Jenner's I Am Cait reality series premiered last night." After playing a clip from the first episode, the host turned to DeFreece and asked, "Did Cait get it right?" The actor replied, "Yes. She got it right – 100 percent. It was like so exciting and touching to watch – a very emotional experience for me."

Hackett praised Jenner – not just for the new E! reality show, but for the other recent P.R. developments since he started acting like a woman:

LARRY HACKETT, FMR. MANAGING EDITOR, PEOPLE MAGAZINE: I keep thinking about the genius of her campaign that is – you know, the Vanity Fair cover; the Diane Sawyer [interview]; and now, this. There was something almost – she's so familiar that there's nothing almost shocking about it. Then again, she's so, so likable. It's – that carries the show.

Pereira followed up by noting that "there was some reticence and worry from some people that were concerned that the Kardashian noise would affect the true part of what was going on – the true issue." Both guests continued gushing over the Olympic gold medalist:

MICHAELA PEREIRA: It was so interesting, since I think there was some reticence and worry from some people that were concerned that the Kardashian noise would affect the true part of what was going on – the true issue. Did it for either of you?

JOSLYN DEFREECE, TRANSGENDER ACTRESS, STAR OF "CARLA": Not for me.

DEFREECE: No. I mean, I was shocked at how intimate it was.

HACKETT: Let me say this: these are – she is an exceedingly wealthy person, and she lives in something of a cocoon with the wealth. There's a scene with Kim and Kanye, where she's with Kim in her closet and there's new outfits, and you're like, this is just-

PEREIRA: This is not anybody else's reality. (laughs)

HACKETT: It's not, and...I thought the show was very effective, and it's incredible that we have become so familiar with this that it didn't seem shocking in any way.

DeFreece later underlined that "one thing that [Jenner] says in the episode was that she's not an expert, but she's an expert on her story. And that's all she can be – and she can share that and touch people with what she's going through." Pereira responded to this with her "very moving" label:

I want to show some clips, because I think there was some very moving parts of it, in particular – and I want to ask you about this, Joslyn, after we watch it – this notion of family acceptance. This is a very touching moment when she has her mom come to see her. Let's watch this.

BRUCE "CAITLYN" JENNER (from E! Network's I Am Cait): It's kind of tough to tell your mother all these secrets. You always have doubts in your mind of how that first impression is going to work out. You want it to be so good. She's never met Caitlyn, and I'm just hoping for the best.

PEREIRA: Where are you going in your head as you watch that?

DEFREECE: It's – it's so touching. It's – it's amazing – you know? It's – like, it really brings back this – you know, how important it is to have acceptance-

DEFREECE: How important it is to have acceptance – and then, that it changes your entire experience.

PEREIRA: And it's interesting: our families – right? They have so much power in our lives, whether it's good or bad

PEREIRA: And to have that kind of support from – from her family has been pretty extraordinary.

The CNN anchor ended the segment with her "catalyst in convesation and narrative" question:

PEREIRA: Is it going to be catalyst for change in conversation in narrative in America, do you think?

HACKETT: I couldn't help but watch it. I watched it with my two teenaged children last night, and I could not help but be struck by how, in some ways, how ordinary it was – and that they were not struck – nothing at all seemed-

PEREIRA: How about that?

HACKETT: It was incredible.

PEREIRA: You mean there was a dose of reality in reality television?

HACKETT: That's it. And I think – again, I keep coming back to it, but her campaign and her reveal, if you will, has been so effective to mitigate against that – that this show, at times, was almost boring. And that, to me, is extraordinary.

PEREIRA: Somebody hit him. (laughs)

HACKETT: I say that as a compliment.

Back in April 2015, Pereira gushed over Jim Obergefell, the litigant for same-sex "marriage" at the Supreme Court, as the "poster boy" for his liberal cause.