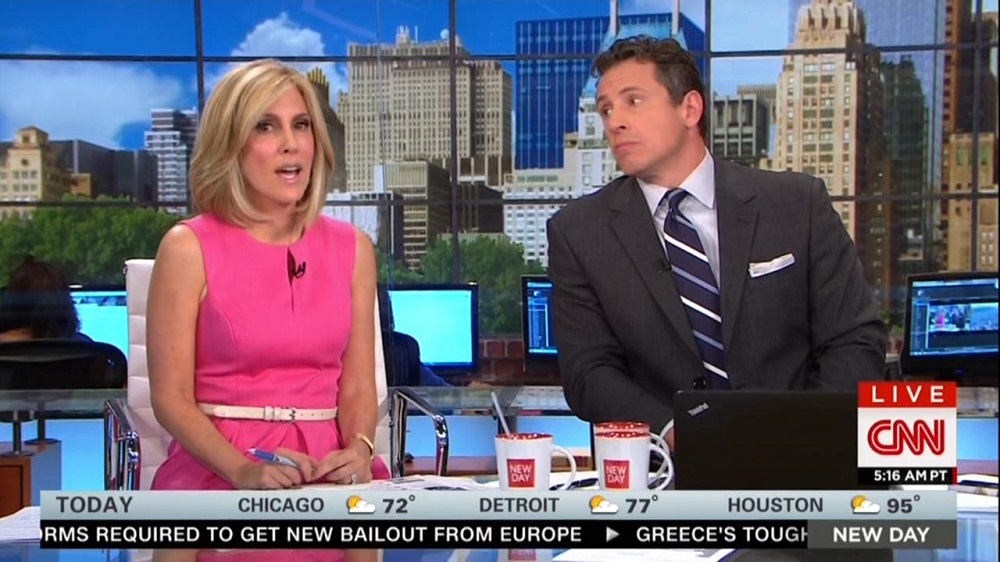 Thursday's New Day on CNN played up how Bruce "Caitlyn" Jenner received the Arthur Ashe Courage Award from ESPN. Alisyn Camerota underlined that "it's an interesting moment in history. I think that it can't be underscored how important it is for that [transgender] community." Chris Cuomo spotlighted how Jenner used his acceptance speech "to call for tolerance, and to quiet critics." Cuomo also defended the honor: "It is often a platform to project different values into society that are born of sport. So why wouldn't it qualify?" [video below]

The anchor used his "quiet critics" line as he introduced correspondent Stephanie Elam's report on Jenner's award. Elam noted that "in 1976...Bruce Jenner stepped out as the world's greatest athlete. Well, last night, Caitlyn Jenner took to the stage in a whole new arena." The journalist didn't include any soundbites from critics of Jenner receiving the Ashe ESPY. She only mentioned that the Olympic athlete has "stolen headlines about the ESPYs for what Caitlyn's doing – not for what Bruce has done:"

STEPHANIE ELAM (voice-over): In the world of sports, Bruce Jenner made his mark in 1976 – winning gold in the Olympic decathlon.

ELAM: But at the ESPY's, it was Caitlyn Jenner who took center stage as the recipient of the 2015 Arthur Ashe Award for courage.

CAITLYN JENNER, ESPY AWARD RECIPIENT: This transition has been harder on me than anything I could imagine.

ELAM: In her speech, Jenner joked about women's fashion-

JENNER: Picking out this outfit – okay, girls, I get it. (audience laughs)

ELAM: Yet, used the spotlight to focus on people who are transgender, like her – but who live without the protection of fame.

JENNER: If you want to call me names, make jokes, doubt my intentions, go ahead – because the reality is, I can take it. But for the thousands of kids out there coming to terms with being true to who they are, they shouldn't have to take it.

ELAM: Jenner got emotional when she addressed her family.

JENNER: The biggest fear I've always had in coming out was I never wanted to hurt anyone else –  most of all, my family and my kids. I always wanted my children to be so proud of their dad.

ELAM: On the red carpet, some of the athletes talked about the focus on Jenner.

VICTOR ESPINOZA, JOCKEY, AMERICAN PHAROAH: I think it's amazing. You know, life is all about happiness.

JENNIE FINCH, U.S. SOFTBALL PLAYER: Everyone can choose who they want to be, and he has that opportunity.

J.J. REDICK, L.A. CLIPPERS GUARD: I certainly knew who he was – even prior to the Kardashians, I knew who he was. And I'm – I'm very happy with what she is doing now.

UNIDENTIFIED WOMAN: So I think she's definitely stolen the headlines.

ELAM: Stolen headlines about the ESPYs for what Caitlyn's doing – not for what Bruce has done.

JENNER: We're all different. That's not a bad thing.

ELAM (on-camera): And for the most part, the athletes that I spoke to on the red carpet were supportive of Caitlyn Jenner and what she is accomplishing now. There were a few people who did not want to address it all, and some who seemed to just temper their responses. But overall, while Caitlyn Jenner was on stage, it was very quiet inside of that theater, and she did get a standing ovation when she was done.

Camerota and Cuomo added their two cents on the issue after Elam's report:

ALISYN CAMEROTA: I think it's an interesting moment in history. I think that it can't be underscored how important it is for that community, and the fact there does seem to be a level of acceptance in this country, which we couldn't have imagined five years ago or ten years ago about what – what he's gone through.

CUOMO: Yes. It is now accelerating. That's for sure. The criticism is this isn't closely related to sport enough. But when you look at other recipients of this award in recent years-

CAMEROTA: Right? Nelson Mandela, who is obviously amazing, but not an athlete.

CUOMO: So, it is often a platform to project different values into society that are born of sport. So why wouldn't it qualify?

CUOMO: The biggest shock to me was J.J. Redick – that good-looking guy in the blue jacket –  saying I know who Jenner was before this. Really? One of the greatest athletes in American history? I'm glad you knew who he was.

CAMEROTA: Did you know that Bruce Jenner had a career before the Kardashians? (Cuomo laughs)