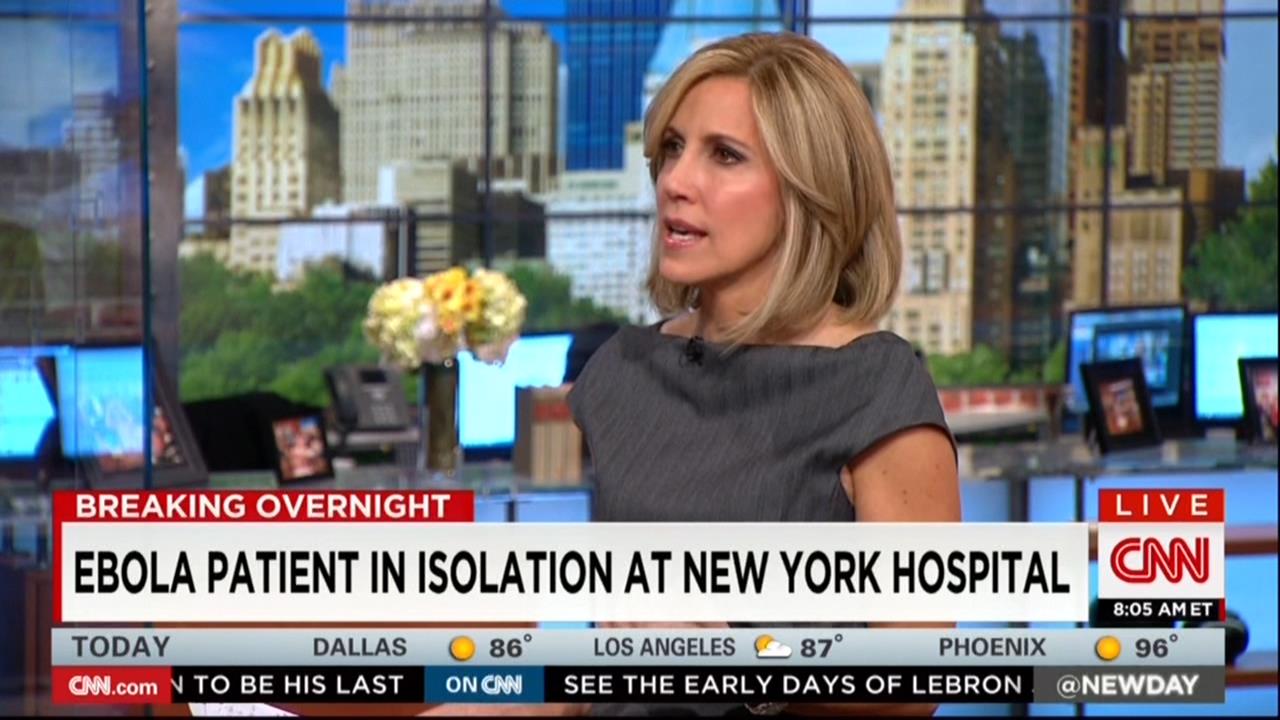 CNN's Alisyn Camerota promoted a liberal talking point about the Obama administration's response to the Ebola outbreak on Friday's New Day, as she interviewed Rep. Jason Chaffetz. Camerota spotlighted how "many Democrats...say that Republicans in the Senate have blocked the President's nominee for a surgeon general that we could have had one year ago – but Republicans have been an impediment."

When Congressman Chaffetz asserted that "the federal government is woefully underprepared" to deal with the deadly virus, the anchor countered that "the CDC tries to assuage our fear by saying that they now have put out new guidelines. Their new guidelines are more protective. They now conform more with the Doctors Without Borders guidelines. So, does that help your fear factor?" [video below]

Camerota interviewed the Utah Republican about his planned hearing on the federal government's handling of Ebola's arrival in the U.S. She first asked, "What are the big concerns that you will be raising at the hearing today?" Rep. Chaffetz answered, in part, by highlighting the thousands of American troops who have been tasked with assisting in the viral outbreak in West Africa. He continued with a recent inspector general report that, in his words, blasts the "woefully underprepared" government.

The CNN journalist followed up with her "fear factor" question. The Republican congressman's blunt reply:

REP. JASON CHAFFETZ, (R), UTAH: No. I mean, this person who is now in isolation in New York City – bless his heart, he's – I mean, you got to love a guy who goes into an infected area – wants to help people. But he was with Doctors Without Borders, which is a wonderful organization, but comes back here, and has the disease. And I think we immediately need to look at travel bans and quarantines. I don't buy into the idea of a self-quarantine. That's obviously not working. And we're sending a lot of mixed signals, and I think that's part of the discussion this morning as well.

Camerota then pointed out how "Sanjay Gupta, our medical correspondent, has reported that he just got information within the past hour of government officials saying that they are considering a mandatory quarantine for people returning from those West African countries." Rep. Chaffetz admitted he hadn't heard about that development, and repeated his call for travel bans and quarantines:

[T]here are those of us, for a couple weeks now, that have been saying you should probably put some sort of travel ban in place, and if you've had direct contact with an Ebola patient – somebody who has the disease – we're going to have to put you in quarantine. It's good for you. It's good for your friends and your loved ones. It's good for the United States of America. I just don't think you can have somebody with direct contact with an Ebola patient, and then, allow them to go bowling in New York City. That's just – that's just not going to work.

The CNN anchor asked her surgeon general question later in the segment. The Republican politician underlined that "there is the office of the surgeon general. There is an acting surgeon general. They have access to thousands of people across the country that are medical professionals and have expertise. I don't understand why we wouldn't leverage them." He continued with criticism of President Obama's new "Ebola czar:"

CHAFFETZ: ...Our criticism of Mr. Klain – I'm sure he's a nice gentleman – but he has no medical experience. And so, they're talking now at the White House – well, we somebody who's an implementer, not a doctor. I want a doctor – somebody who understands the science here – to try to coordinate all the different agencies – local and federal. And then, when we do have that personnel that we have – the czar that the President picked, he won't come answer questions from Congress – from Democrats and Republicans. I don't – I don't understand that.

CAMEROTA: Well, of course, I mean, that's what the administration says that Ron Klain is tasked with, which is coordinating all these different siloed agencies – the NIH, the WHO, the CDC – and getting them all to, sort of, be on the same page, that he's – has managerial expertise. What do you say to that?

CHAFFETZ: We have questions for him about how he's doing this. We're going to have the inspector general, who took a very objective view over a long period of time, and came in – and they will say that the federal government is woefully underprepared. They don't have the personal protective equipment.

I've got serious questions how our customs and Border Patrol agents – they're wonderful, hard-working people – how are they supposed to assess these travelers that are coming into the United States of America and try to guess whether or not that they have – do they have Ebola? Were they in the infected area? What should we do with them? You have doctors that can't make these types of calls who are actually in the infected area. How are you going to have a customs and border patrol agent dealing with this? I – there's a lot of questions for this person.