Sharyl Attkisson, whose coverage of the Fast and Furious gunrunning scandal won CBS Evening News an Edward R. Murrow Award in 2012, and also provided hard-hitting reporting on the September 2012 terrorist attacks on the U.S. facilities in Benghazi, Libya, announced her sudden departure from CBS on Monday afternoon in a post on Twitter: "I have resigned from CBS."

During an October 2013 report on CBS This Morning, Attkisson revealed a new weapons smuggling scandal surrounding the Obama administration that involved a grenade that was used to murder three police officers in Mexico. Several months earlier, in June 2013, the now former CBS correspondent revealed that her computer was hacked – something she had suspected for weeks:

Dylan Byers of Politico provided additional details of Attkisson's resignation in a Monday item on his blog: 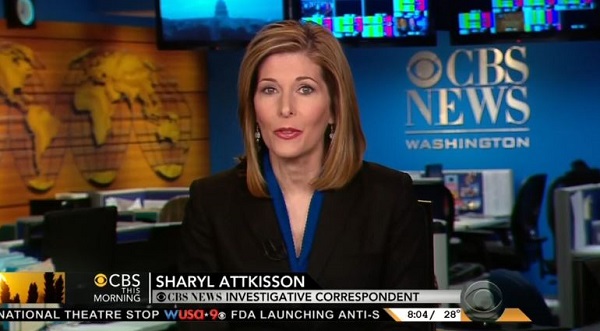 CBS News investigative correspondent Sharyl Attkisson has reached an agreement to resign from CBS News ahead of contract, bringing an end to months of hard-fought negotiations, sources familiar with her departure told POLITICO on Monday.

Attkisson, who has been with CBS News for two decades, had grown frustrated with what she saw as the network's liberal bias, an outsized influence by the network's corporate partners and a lack of dedication to investigative reporting, several sources said. She increasingly felt like her work was no longer supported and that it was a struggle to get her reporting on air.

At the same time, Attkisson's own reporting on the Obama administration, which some staffers characterized as agenda-driven, had led network executives to doubt the impartiality of her reporting. She is currently at work on a book -- tentatively titled "Stonewalled: One Reporter's Fight for Truth in Obama's Washington" -- which addresses the challenges of reporting critically on the Obama administration....

...Attkisson had become a polarizing figure at the network, sources there said. While some championed her relentless dedication to investigations -- ranging from defective Firestone Tires to the Fast and Furious gunwalking scandal -- others saw evidence of a political agenda, particularly against President Obama. (The bulk of Attkisson's work since 2009 has focused on the failures or perceived failures of the Obama administration, including the administration’s failed green energy investments and the attack in Benghazi, though she has reported on several Republican failures as well.)

Back in May 2013, Byers reported that "Attkisson can't get some of her stories on the air, and is thus left feeling marginalized and underutilized." The journalist hadn't reported about the Benghazi attacks during a five month-plus period between November 23, 2012 and May 8, 2013. Her next report on the issue didn't come until September 16, 2013 – almost four months later. CBS also ignored Attkisson's September 2013 scoop on Secretary of State John Kerry's refusal to let the Benghazi survivors testify.

During a December 2013 report, the correspondent touted  'Fast and Furious' whistleblower John Dodson as "a rare example, especially amid the Obama administration's war on leaks." Attkisson also highlighted that "there's still a court battle over the 'Fast and Furious' documents that President Obama is withholding from Congress under executive privilege." A few weeks earlier, she also devoted several reports to the many problems surrounding ObamaCare.