The Big Three network morning shows on Wednesday briefly noted the one-year anniversary of the Islamist attack on the U.S. compound in Benghazi, Libya, but not one pointed out the latest development in the ongoing controversy over what happened. On Tuesday, CBS correspondent Sharyl Attkisson reported on Twitter that Secretary of State John Kerry "tells [C]ongress he will not honor the request to make Benghazi survivors available for questioning."

Norah O'Donnell highlighted on Wednesday's CBS This Morning that "Republican Congressman Darrell Issa wants to interview survivors" and that "he's giving the State Department until Monday to meet his demand", but didn't mention Kerry's refusal. [MP3 audio available here; video below the jump]

ABC's Amy Robach devoted a 20-second news brief to the anniversary of the terrorist attack in Libya on Good Morning America, but omitted Rep. Issa's request and Secretary Kerry's denial. The ABC news anchor merely mentioned that "to this day, no suspects have been arrested. U.S. officials accuse the Libyan government of standing in the way."

Robach concluded the brief by mentioning a "powerful explosion ripped through Libya's foreign ministry building in Benghazi" on Wednesday morning. Almost an hour later, she gave another 14-second news brief on the latest attack.

NBC correspondent Peter Alexander referenced the Benghazi anniversary in passing during the lead report on Today about President Obama's Tuesday evening address on Syria: "The remarks came [from President Obama] on the eve of today's anniversary, 12 years since 9/11 and just 12 months since four Americans were killed in Benghazi." Several minutes later, news anchor Natalie Morales gave a 20-second brief on the Wednesday terrorist attack in the Libyan city. But like Robach, Morales didn't mention Issa's request.

O'Donnell also mentioned the bombing of the Libyan foreign ministry's facility in Benghazi during her 30-second brief. The CBS anchor devoted 14 seconds to latest attack, and additional 16 seconds to Issa's "demand" of the State Department. However, O'Donnell ignored her own colleague's scoop about Kerry: 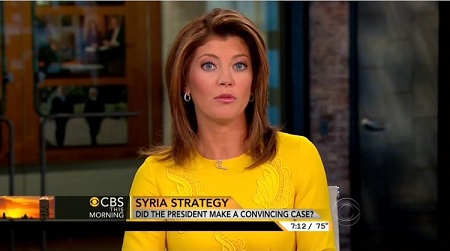 NORAH O'DONNELL: A powerful blast this morning in Benghazi, Libya – it comes on the anniversary of the deadly attack at the U.S. consulate there. Officials say a car bomb exploded outside the foreign ministry offices this morning. No serious injuries are reported.

One year ago today, four Americans, including Ambassador Chris Stevens, were killed on the assault on the U.S. mission. The chairman of the House Oversight Committee, Republican Congressman Darrell Issa, wants to interview survivors. He's giving the State Department until Monday to meet his demand.

After her Twitter post on Kerry, Attkisson subsequently Tweeted that "House oversight republicans say they may issue subpoenas if sec Kerry doesn't change his mind." On Wednesday, the CBS investigative correspondent posted a lengthy item on CBSNews.com about the one-year anniversary of the attack that killed Ambassador Christopher Stevens and three other Americans. She outlined that "the Obama administration continues to keep a great deal of information under wraps citing an ongoing investigation, national security and other reasons. The secrecy is an ongoing point of contention with Republicans in Congress." But like much of her past reporting on Benghazi, her reporting didn't make it on the air.

Back on August 20, 2013, CBS This Morning was the sole Big Three network morning newscast to report that Secretary of State Kerry cleared four mid-level diplomats to return to duty, after they were placed on leave by his predecessor, Hillary Clinton, in the aftermath of the Benghazi attack. Neither Good Morning America nor Today devoted any air time to the former Democratic senator's move. Instead, the ABC and NBC morning shows aired full reports to the Obama family's new dog.

[Update, Wednesday, 1:28 pm Eastern: the transcripts of the briefs from ABC's Good Morning America and NBC's Today on Wednesday are available at MRC.org.]