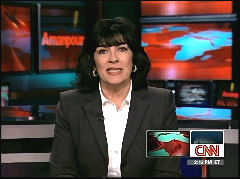 The New York Post reported on Thursday that CNN chief international correspondent and anchor Christiane Amanpour, who was recently hired by ABC, will apparently be receiving a $2 million a year salary for her upcoming gig on their This Week program, just as the network is laying off hundreds from its news arm.

The unsigned item stated that the "hiring of Christiane Amanpour...couldn't have come at a worse time for staff morale. With ABC News reducing the payroll by 400 jobs, staffers are bitter that Amanpour, who'd been at CNN for 26 years, will make a rumored $2 million a year. An ABC spokesman refused to comment on Amanpour's salary, but an insider said, 'Those who know don't talk, and those who don't know can't stop talking.'"

The New York Times reported on February 23 that ABC News plans to "sharply reduce its news-gathering staff through buyouts and possible layoffs...ABC employees said they expected the cutbacks would affect 300 to 400 people, or roughly 25 percent of the news division’s work force."

The MRC's Brent Baker noted on March 18 that with Amanpour's hiring, ABC would be "replacing a Bill Clinton operative with the wife of an operative for both Bill and Hillary Clinton." Baker also looked back at the CNN personality's reporting over the years and pointed out her liberal slant.
Media Bias Debate ABC CNN This Week