AP Lede on O'Keefe Raises Watergate Specter: 'What Did the Right Wing Know?' 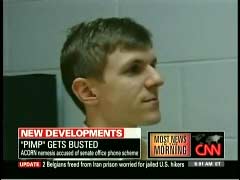 The Associated Press on Wednesday insinuated there might be a wider conservative plot behind James O’Keefe’s alleged misdeeds at Senator Mary Landrieu’s office, and invoked the Watergate scandal in their lede: “Was it an attempt at political espionage? Or just a third-rate prank? How high did it go? And what did the right wing know and when did they know it?”

In what some Democrats are calling the “Louisiana Watergate,” four young conservative activists — one of them a known political prankster — were arrested this week and accused of trying to tamper with the telephones in Democratic Sen. Mary Landrieu’s New Orleans office.

But two days after their arrest, neither the FBI nor federal prosecutors would say what the defendants were up to or whether they were part of some larger conspiracy....

Michael Madigan, O’Keefe’s lawyer, said Wednesday that his client was not trying to wiretap or interfere with Landrieu's phones, but he would not explain why O'Keefe was there. He also would not say whether O'Keefe was working for someone or was on his own.

“The truth will come out,” said Madigan, a Washington lawyer who represented Sen. Howard Baker, the Republican who famously asked during the Watergate investigation, “What did the President know and when did he know it?”

Throughout the article, Kunezelman and Blackledge described O’Keefe, the three others arrested with him, and individuals and organizations connected to him, such as Andrew Breitbart, as “conservative,” as they did in the second paragraph. In fact, the term “conservative” came up eight times in their article. But when the AP writers mentioned O’Keefe’s role in the undercover videos which exposed ACORN, they only referred to the left-wing organization as a “community organizing group.”

Last year, O’Keefe, a 25-year-old self-described investigative journalist, posed as a pimp in the hidden-camera videos that embarrassed the community organizing group ACORN....

Meanwhile, the conservatives who once made O’Keefe their hero for his hidden-camera expose of ACORN distanced themselves from his latest project.

Hannah Giles — who posed as a prostitute for the sting videos, in which ACORN staffers appeared to offer illegal tax advice and support the misuse of public funds — said she was shocked when she heard about O’Keefe’s arrest....

All four defendants shared an interest in conservative politics and commentary.

O’Keefe and Joseph Basel, 24, formed their own conservative publications on their college campuses — O’Keefe at Rutgers University in New Jersey, Basel at the University of Minnesota-Morris....

A third defendant, Stan Dai, 24, was editor of George Washington University's conservative paper and directed a program aimed at getting college students interested in the intelligence field after 9/11.

The fourth man, Robert Flanagan, 24, wrote for the blog of the New Orleans-based conservative Pelican Institute....

O'Keefe’s ACORN videos were first posted on biggovernment.com, run by conservative Andrew Breitbart, and O’Keefe has been a paid contributor to the site. But in an e-mail, Breitbart said: “We have no knowledge about or connection to any alleged acts and events involving James O’Keefe at Senator Mary Landrieu’s office.”

It looks like the AP is following the lead of their colleagues at the Big Three networks. As Scott Whitlock documented earlier on Wednesday, all three of the networks’ morning shows highlighted O’Keefe’s arrest, just 17 hours after the story broke. ABC’s Pierre Thomas, like Kunezelman and Blackledge at the AP, didn’t mention ACORN’s left-wing affiliation, referring to it as “an advocacy group which helps the poor,” and trumpeted how “some Democrats are calling this case the Louisiana Watergate.”
Political Scandals Labeling Liberals & Democrats Conservatives & Republicans Bias by Omission ACORN Wire Services/Media Companies Associated Press Michael Kunzelman Brett J. Blackledge James O'Keefe